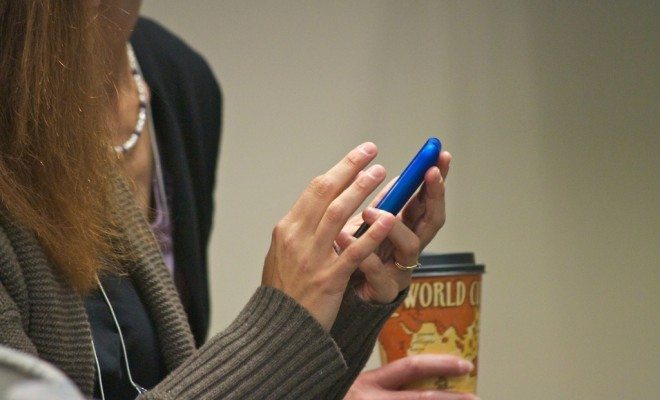 Alibi: New App Aims to Record Everything, Including the Police

Almost six months after Michael Brown was killed in Ferguson, Missouri, we’re still having a conversation about the potential of police officers wearing body cameras to ensure accountability and answer the questions that naturally spring up after a police shooting. But will body cameras be enough? A new app called “Alibi” doesn’t think so–and it wants to be the “body camera” of the private citizen, as well as so much more.

Right now, Alibi is only available on Android devices; it’s a $0.99 download. Alibi essentially serves as a mobile witness–depending on how you set it, it can record video, audio, still images, and GPS locations. It doesn’t store this data forever; unless you tell it otherwise, it dumps everything after an hour, or else the storage on a phone would be filled up way too quickly. One of the biggest challenges in developing the app came from making sure that it wouldn’t immediately drain a phone battery. But because the video being recorded is so low-caliber, they’ve managed to make it so even running video all day, it only takes up 1.2 times the battery consumed during normal usage.

So why would a normal person want a device that, to be completely honest, seems a bit paranoid? There are plenty of reasons. The reasoning that inspired the app itself is pretty simple–many people in the U.S. are worried about the increase in police brutality and profiling. Alibi founder Ryan Saleh explained his inspiration for the app in an interview, saying:

The way that Alibi came to be was that I was pulled over for a traffic ticket in New York City. Two cops came up to my windshield and knocked on the windshield, and one of them’s just talking, totally normal, and the other one takes the liberty of asking me to roll down the window and sticks his head in the car and pokes a flashlight around. I’m a straight-laced person, I have nothing to hide, and it didn’t bother me that much at the time, but I was thinking about it, and was like, ‘You know, that probably wasn’t legal.’

I never would have thought to pull out a camera and record the guy, and that probably would have caused more pain than it was worth in the situation, but the number of times in my life that I wish I was recording something — you don’t think to do it at the time, but you go back and you wish you were recording something — is outrageous. I said to myself, ‘You know, we all walk around with a device in our pocket that has a GPS in it, a microphone and a camera.’

Obviously, interactions with police aren’t the only thing that Alibi would be used to record. It could actually be used in reverse–as a tool for the police. Obviously, a 99-cent app is cheaper than a body camera; Alibi could be required by police departments in lieu of body cameras.

Other things that Alibi could be used for are plentiful. It could be used to prove a literal alibi with the GPS and pictures function. It could be used to record something you saw as a passerby. But it could also be used in really creepy, negative ways as well. Imagine if everything you did or said could be recorded by someone who had a smartphone. It could easily be used for nefarious purposes. There are also legal issues here–there are certain laws that restrict photographing people in private places, or places where they have a reasonable expectation of privacy. Having a constantly recording device could break those laws.

Alibi definitely has its practical uses, and it’s an intriguing solution to the issue of American concerns about our police force. That being said, it’s also a little creepy, and may not be something that will worm its way into daily life too quickly. Privacy is still an important right, and while Alibi may protect other rights, privacy can’t be forgotten.

Anneliese Mahoney
Anneliese Mahoney is Managing Editor at Law Street and a Connecticut transplant to Washington D.C. She has a Bachelor’s degree in International Affairs from the George Washington University, and a passion for law, politics, and social issues. Contact Anneliese at amahoney@LawStreetMedia.com.
Share:
Related ItemsAlibiAndroidAppAppleApplicationFergusoniOSMichael BrownPolice BrutalityPolice MilitarizationPrivacyRecordingRight To PrivacySmart PhoneTechnologyVideo