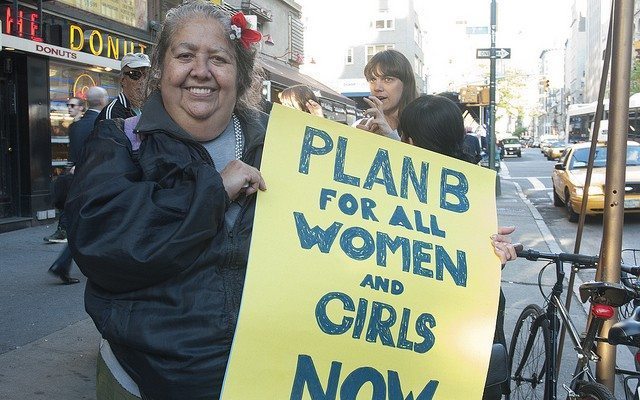 Abortion Rates Are Down, But Why Does Your News Outlet Say That Is?

Abortion rates in the US are at the lowest point since the procedure was legalized in 1973. Between 2008 and 2011, the rate of abortions nationwide decreased by 13 percent, and according to a study conducted by the Guttmacher Institute, there are several explanations contributing to this downward trend. Researchers noted that the decreasing abortion rate coincided with a general decrease in the number of pregnancies and births in the US, an increase in contraception access, and the general effects of the recession. Significantly, the study did not find a correlation between the lower rates and restrictive state policies on abortions. For instance, some of the states included in the remarkably lower rates of abortion were California and New York, states that do not have very restrictive abortion laws.

These findings are very interesting, but what is really important about the research is how it is handled by the media. The differences between the sources reporting on this study provide an excellent example of the subtle techniques news outlets use to impact the opinion of their audiences.

Here is Fox News‘ rendition of the story.

Although Fox claims to be ‘fair and biased’, it is pretty well known that Fox News is right leaning. The article correctly reports the published data from the Institute, but also includes certain additions to the piece that speak to the ability of news sources to include an ideological slant. First, the outlet incorporates a picture of pro-life activists as if the decreased abortion rate has been attributed to the success of groups lobbying to restrict abortion, which is contradictory to the findings’ inability to correlate the implementation of states’ restrictive policies and the decrease in abortions.

Furthermore, the Fox article includes statements from leaders of pro-life organizations who were confident that the results of the findings meant that their efforts to discourage abortion were succeeding, despite the lack of supporting evidence. The article includes quotes from the presidents of the National Right to Life Committee and Americans United for Life, both of whom remain committed to the belief that the pro-life movement should be credited for the drop in abortions. On the contrary, there are no statements from a pro-choice organization. By only including the opinions of one point of view on the abortion issue, the Fox article fails to objectively report on the story.

Another conservative source, the New American, goes further in its article; it almost chastises the Institute’s study by failing to include data of abortion rates after many states in 2011 enacted new restrictive abortion policies. It also includes statements from pro-life affiliates who discuss the next steps in the fight for limiting abortion, which completely strays from the discussion of the study’s findings.

Compare that to the Daily Beast’s rendition of the study, which was largely in response to conservative positions on the story.

In this article, The Daily Beast clearly showcases its slant by not only featuring a picture of pro-choice activists, but by arguing that progressive efforts such as increased contraceptive access and sex education policies have a greater impact on the decreased abortion rate than policies limiting abortion clinics. While the study did find contraceptives to be a factor in the decreased abortion rate, the article fails to mention anything about the other variables listed by Guttmacher, which are crucial to the overall findings: decreased birthrate and the recession. The article takes only the pieces that fit well into their argument.

The Daily Beast’s liberal take on the story is echoed by Slate, which featured a picture of condoms and stated that the lower rate should be championed by pro-choicers.

Of course, freedom of the press allows the media to say what they want about different stories, and these sources did correctly display the Institute’s data. However, what the contrast of the sources shows is that readers need to be aware of potential bias depending on where they choose to get their information. True, it is pretty well known that Fox News and The Daily Beast have clear political ideologies. However, these blatant examples of the media’s tricks to slant their reporting highlights the importance of smart and careful reading. By providing visual images of a clear ideological stance on an issue as well as selectively including or deleting certain parts of the study, the different articles show the subtleties that they utilize to influence their readers or viewers.

Additionally, this example shows the importance of seeking out sources of one’s opposing viewpoint in order to get a different perspective and learn how the other side can view the same issue. In order to truly grasp the crux of the issue at hand, readers must be prepared to compare different media sources to really get the best information.

Sarah Helden
Sarah Helden is a graduate of The George Washington University and a student at the London School of Economics. She was formerly an intern at Law Street Media. Contact Sarah at staff@LawStreetmedia.com.
Share:
Related ItemsAbortionConservatismIdeologyLiberalMediaObjectivityResearchUnited States