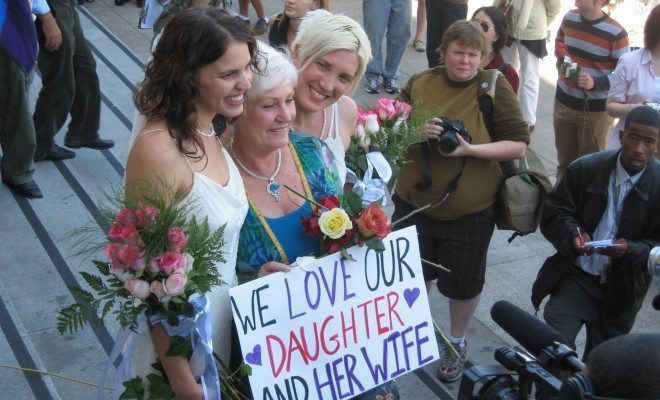 In a speech on Saturday, February 8, 2014 to a gay rights group in New York City, Attorney General Eric Holder Jr. outlined the plan for the United States government to extend legal rights to same sex couples in order to decrease the inequalities between gay and straight marriages. “In every courthouse in every proceeding, and in every place where a member of the Department of Justice stands on behalf of the United States, they will strive to ensure that same-sex marriages receive the same privileges, protections, and rights as opposite sex marriages,” promised Holder to the gay community.

The latest changes applied to protect same-sex married couples include:

1. Same-sex spouses are eligible to file jointly for bankruptcy, providing joint relief from debts. This excludes debts of one spouse owed to another or former spouse, which will still need to be paid as well as domestic support obligations.

2. Federal inmates who are in same-sex marriages will have the same rights and privileges as those in heterosexual marriages, including the rights to visitation, to be with the other spouse in times of crisis, to be escorted to the funeral of an inmate spouse, protection of communication between same-sex spouses, and the early release of an inmate if the spouse becomes debilitated.

4. Death and educational benefits in the case that one spouse is killed or injured in the line of duty as a public safety officer.

5. The right to decline to give testimony against a spouse in civil and criminal cases. This will be applicable to all states, even those that do not extend this right to same-sex couples.

Multiple agencies falling under the Department of Justice are affected by this extension of privileges, including the FBI, the Bureau of Prisons, the Bureau of alcohol, Tobacco, Firearms and Explosives.

These privileges can be seen as an extension to the Supreme Court case decided in June 2013, United States vs. Windsor, which struck down the idea that same-sex couples could not receive federal marital benefits under the federal Defense of Marriage Act. Finally, the conclusion of this case is being applied within the justice system, as same-sex couples are receiving the benefits they deserve within a legal marriage.

This extension of legal rights to same-sex couples was made official on February 10, 2014 through a policy memorandum. These privileges immediately ensure that all same-sex married couples are treated equally under the law.

In the larger picture, this extension has amounted to a step closer to equality in our country. These are provisions that all heterosexual couples are granted and it seems absurd to consider being married without such security. The fact that one spouse in a same-sex marriage could be killed in the line of duty and the other was previously not granted death benefits is almost unethical. A marriage should always include such protection in cases of death, imprisonment, and criminal offenses. The extension of these privileges  by the government has made real the marriage vows that many same-sex couples have promised to one another, allowing them to support each other whatever circumstances they may face. If marriage is granted to same-sex couples, the benefits enjoyed by heterosexual couples should also be extended.