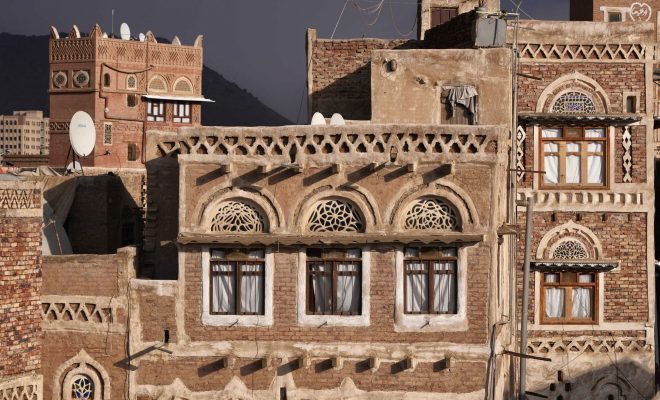 Yemen: Anarchy at the Edge of the Arabian Peninsula

Yemen is a small country on the Arabian Peninsula bordered by Saudi Arabia to the north, Oman to the east, the Red Sea to the west, and the Gulf of Aden to the South. While geographically small and relatively isolated, Yemen is currently having a major impact on world politics. This recent attention is due to a current vacuum of power, which depending on the outcome, threatens to strengthen a powerful branch of Al Qaeda.

The path to this point however, is about as clear as the current situation on the ground there–that is to say, very unclear. Nonetheless, here is what you need to know about the history of the nation, highlights of the major groups wrestling for control, and important considerations as Yemen moves forward.

Yemen’s legacy is very impressive. At the time of the Roman Empire, Yemen was a thriving trade center, which served as a sort of central point between Europe and Indian ports to the east. Yemen was also a very diverse place, and home to large Christian and Jewish populations until it was conquered during the Islamic expansion of the eighth century AD.

From then up until the nineteenth century, Yemen was primarily ruled by a succession of Zaidi dynasties, a sect of Shia Islam. That era ended with the British annexation of Aden, the principle port of Yemen, in 1832. In 1904, the British and the Ottomans agreed to divide the country in half, with the British ruling the south and the Ottomans overseeing the north. After independence, as well as years of fighting between royalists, colonial powers, and even communist groups, the country finally united again in 1990; however, political divisions linger, which has led to continued infighting.

This infighting is perhaps best personified through former president Ali Abdallah Saleh. Saleh became the leader of then-North Yemen in 1978. He increased and consolidated his power, becoming leader of the combined Yemen in 1990. In 1994 he put down an attempted partition of the country by southern dissidents who felt marginalized in the newly combined state. From then until 2011 Saleh continued as president. While he continuously dealt with insurgent groups, his power was never legitimately threatened.

The situation changed in 2011 as the Arab Spring movement swept into Yemen. Unrest began with a demonstration that January that forced Saleh to agree to not seek re-election. Saleh’s efforts at appeasement failed and protests mounted, leading him to impose a violent crackdown. The violence only continued when, that April, he refused to sign an agreement to hand over power, despite the fact that the agreement was authored by his own party. Eventually, Saleh was injured by a bombing and had to travel abroad for medical treatment. In November 2011, several months after his return, he finally agreed to cede power to his lieutenant, Adrabbuh Mansour Hadi.

The group that had opposed Saleh during the uprising was a complex mix including socialists, secularists, and moderate Islamists. One of the most important opposition groups was the Islah Party, or the Yemeni branch of the Islamic Brotherhood, which ultimately came to dominate the movement.

The protests ended with a semi-bipartisan government. Although Saleh was indeed forced to leave power, his party was given half the seats in the new parliament and he was granted immunity.  The rest of the Parliament was made up of members of Islah.

Thus, while Saleh finally gave up control after 33 years of rule, the violence did not stop because none of the issues that caused the conflict in the first place had actually been resolved, and new issues arose from dissatisfaction over the new government. Following his ascension, new President Hadi had to contend with a new variety of violent factions, most notably an Al Qaeda-affiliated group and Zaidi rebels.

These Zaidi rebels are known as the Houthis, a Shia group from the mountainous north who feel marginalized by the new government, composed of a mix of Islah and Saleh supporters. Due to this perceived marginalization this group has continued fighting and has now occupied the capital city, Sanaa.

The current situation in Yemen can best be described as chaotic. Just last week President Hadi, the prime minister, and his entire cabinet resigned following an attempted peace deal between the government and the Houthi rebels. The government resigned because they no longer wanted to be part of the standoff with the Houthis. Who exactly is in charge in Yemen right now is completely unclear. Observers worry that this power vacuum could lead to continued conflict, or open up control of Yemen to terroristic control.

The Houthis, as touched on earlier, are a Shi’ite Zaidi rebel group from northern Yemen. Their name comes from their former leader, Hussein Badr al-Din al Houthi, who led an unsuccessful uprising in 2004 and was killed later that year. The Houthis’ main issue with the Yemeni government is their perceived marginalization as Shias in a Sunni-dominated nation. They also strongly oppose the United States, the most prominent example of which comes from one of their slogans, which translates in part to “death to America, death to Israel.”

The Houthis have been linked to Iran. Similar to Hezbollah in Lebanon, the Houthis are a minority Shia group fighting in a nation with a sizable majority-Sunni population in Yemen. Following the uprising against the government, Iranian officials proclaimed their public support for the Houthi rebels. Nonetheless, the Houthi rebels deny any direct backing from Tehran or any Iranian supporters.

AQAP, Al Qaeda in the Arabian Peninsula, was formed in 2009 by terrorists from Yemen and Saudi Arabia under the direction of Nasir al-Wahishi and is designated as a foreign terrorist organization by the United States. The goal of the organization is to reestablish a caliphate on the Arabian Peninsula. While the group had performed numerous attacks already in Saudi Arabia and on Western nationals, it came to prominence globally with the failed bombing of a U.S. flight over Detroit on Christmas Day 2009. AQAP was also responsible for another failed attempt to detonate bombs hidden in printer cartridges bound for the U.S. on cargo planes in 2010.

The organization was also home to the American cleric, Anwar al-Awlaki. Using Awlaki’s teachings, the group also tried to reach out to dissatisfied westerners; it even had its own magazine, Inspire. In 2011 the group was able to conquer a sizable amount of territory before it was repelled a year later by the Yemeni military. Nevertheless, it continued planning attacks against American and Yemeni targets, and in 2013 the threat was serious enough that the United States closed several locations in the area. Most recently, AQAP claimed responsibility for the Charlie Hebdo shootings in Paris. Now it’s one of the many groups operating in Yemen, and complicating the situation further.

Prior to 2000, Yemen’s most well known interaction with the United States seemed to be its denunciation of the first Gulf War. This all changed in 2000 with the bombing of the U.S.S. Cole in the port of Aden, which killed 17 American service personnel. Nevertheless, following the attack, U.S. involvement in Yemen remained minor, consisting of covert operations to capture specific targets and occasional airstrikes; however, since the unrest following the Arab Spring protests in 2011, the number of air strikes has increased dramatically.

Specifically of interest is the increased use of drones to carry out these attacks. This reached a height following the killing of American citizen Anwar Al-Awlaki without due process. While the Obama Administration eventually produced a memo from the Department of Justice signing off on the attack, it has been heavily criticized and is still being debated. While the debate may rage on, this past Monday the U.S. launched another drone strike against Yemen, the first since the Hadi government resigned. The video below gives a brief recap and summary of the major players in Yemen.

With all these groups jostling for control in Yemen, what’s on the radar moving forward? First is the role of the Houthis. Since their coup and the resignation of the government, the Houthis seem to be hesitant to claim power for themselves, which has left some experts wondering if they can or even want to. Something that does seem certain going forward is the Houthis will, while not necessarily trying to run the future government, at least increase their status and avoid any perception of marginalization again.

Another concern is the role of Iran. While the Houthis have denied direct support from Tehran it is quite possible that Iran or its allies, such as Hezbollah, have provided weapons to the Houthis; however, this revolution is Yemen-centric, so it is important to not give Iran too much weight. Nevertheless, with Iran and Saudi Arabia locked in an ongoing proxy war, this does potentially present Iran with another opportunity to empower a Shia Islamic movement.

In the meantime however, this has opened Yemen to increased chaos. This could very likely help AQAP attract new members who are unsatisfied with the government and weary of the advancing rebels. AQAP might also be increasingly hard for the U.S. to target in Yemen without government support and an unfriendly Houthi regime in charge. Furthermore, there are also fears of succession in the south, which is something Saudi Arabia has long favored.

For the U.S., Yemen offers no resources or other tangible benefits; however, its proximity to Saudi Arabia, a major oil producer, as well as the presence of AQAP, the only Al Qaeda branch since 9/11 to attempt attacks on the American homeland, will likely keep the United States interested at the very least. The video that follows discusses several of the possibilities looming in Yemen’s future.

Yemen is in a chaos bordering on failure. Its government has resigned and in its place is a rebel tribe, possibly backed by Iran, and an Al Qaeda offshoot vying for power. Amid all this anarchy the average citizen remains poor, hungry, and likely very afraid.

Yemen’s role alongside the U.S. is also in doubt. Without a loyal government, U.S. counterterrorism efforts could take a hit, which is especially troubling as the AQAP is perhaps the most dangerous Al Qaeda branch beyond its own borders, as exemplified by the Charlie Hebdo attacks in France. Therefore while Yemen hashes out its internal politics, the whole region and world will be paying close attention. The results could have ramifications far beyond its borders and affect more than just its inhabitants.

Time: A Brief History of Yemen

BBC: Yemen Crisis: Who Are the Houthis

NPR: Who Are the Houthis of Yemen?

Michael Sliwinski
Michael Sliwinski (@MoneyMike4289) is a 2011 graduate of Ohio University in Athens with a Bachelor’s in History, as well as a 2014 graduate of the University of Georgia with a Master’s in International Policy. In his free time he enjoys writing, reading, and outdoor activites, particularly basketball. Contact Michael at staff@LawStreetMedia.com.
Share:
Related ItemsAdrabbuh Mansouri HadiAli Abdallah SalehAQAPArabHouthiHouthisIslahIslamMuslimShiaShiiteSunniYemenZaidi