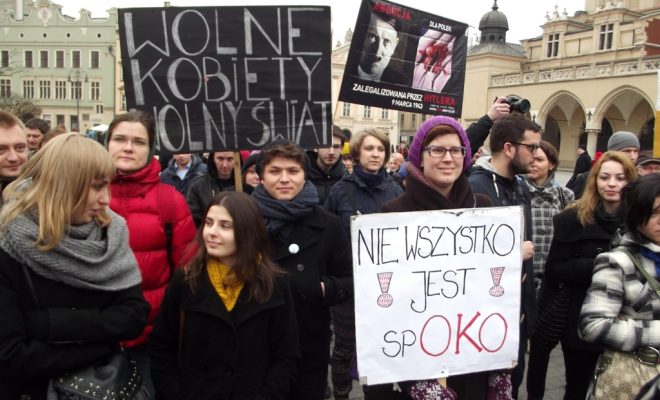 Earlier this month Polish nationals fought for their reproductive rights after the ruling Law and Justice Party (PiS) tried to pass a bill designed to criminalize abortions. The proposed statute, which was originally brought forth by an anti-abortion citizens’ initiative and encouraged by the Catholic church, aimed to completely outlaw abortions unless the mother’s life was threatened. Prison sentences for illegal procedures would have also increased from two to five years, in addition to penalizing surgeons who perform unlawful operations.

In the wake of such a proposition, a series of protests dubbed “Black Monday” disrupted the ordinance from gaining further momentum in the predominately Catholic country. Three days after these events unfolded, the Sejm (the lower house of the Polish parliament) overturned the bill in a 352-58 vote–proving the power of an active citizenry. Considering how successful these protests were in persuading the government to discard the bill, Poland nonetheless has an array of political and cultural challenges to overcome before women achieve total self-autonomy. The following article delves into some of these obstacles.

The Magnitude of “Black Monday”

On a conceptual level, these historic actions were inspired by an Icelandic strike in 1975, where 90 percent of the country’s female population abandoned their jobs and domestic duties to denounce rampant workplace discrimination. Propelled by this example, protests were held throughout Poland and other surrounding countries on Monday October 3, 2016. Solidarity events took place in Berlin, Dusseldorf, London, and Paris, although the largest of these assemblies occurred in the Polish capital of Warsaw where approximately 30,000 individuals (clad in black clothing) gathered to rebuke the religious-based injunction. Such an outpouring of support surprised many, considering people only had a day’s notice to prepare for the event. Some even boycotted school and work to show their commitment to the cause.

“The protest was bigger than anyone expected. People were astonished,” said one activist, Agnieszka Graff. “Warsaw was swarming with women in black. It was amazing to feel the energy and the anger, the emotional intensity was incredible.”

During an interview with NPR, Reuters staff member and Polish citizen, Justyna Pawlak, also explained how the protests caught on like wild fire, despite the lack of initial planning:

There wasn’t a real kind of serious organization committee. And what’s interesting is, you know, Poland, as you said, is a very conservative country still, even though the power of the church and the – kind of the sway of the church over the heart and soul of churchgoers has been waning, bishops still have a lot of – a lot of influence over how people vote and how they think. There’s still quite a lot of opposition for abortion on demand in Poland, but many women felt that these new proposed restrictions just simply went too far.

Following these nationwide protests, the Justice and Human Rights Committee of the Polish parliament urged the PiS to reconsider the ordinance. PiS Chairman Jaroslaw Kaczynski surprised many by taking this suggestion to heart after witnessing the intensity of the Black Monday demonstrations. According to the Wall Street Journal, the right-wing politician realized that a total ban could potentially have adverse effects later down the road. From his perspective, a complete ban would only embolden future efforts among liberal politicians to ensure unabated access to abortions someday. In the end, Kacynski’s remarks resonated among other senior politicians and even the Catholic clergy, who couldn’t endorse prison sentences for women seeking abortions.

Compared to other countries in the European Union, Poland’s pre-existing reproductive laws were already among the most restrictive because of the nation’s Catholic roots. Last year approximately 1,000 women received legal abortions, which could only be fulfilled if the fetus was severely damaged, if the mother’s life was jeopardized, or if the pregnancy was caused by incest or rape. Although the recently initiated bill was not ratified, these stipulations still exist today. Faced with such barriers at home and fear of stigmatization, an estimated 150,000 illegal abortions are performed every year in facilities with questionable sanitary conditions. Keeping this in mind, thousands of Polish women also travel abroad to receive abortions, especially in nearby countries such as Germany, Czech Republic and Slovakia–termed “abortion tourism.”

These aforementioned policies began in 1993 as a means to replace Poland’s communist-era policies where abortions were once easily obtainable. With 95 percent of the country identifying as Catholic, it is widely acknowledged that the church yields profound “moral authority” over the population and influences people’s political decisions. Some doctors are reluctant to even facilitate abortions, even if the mother’s survival is in peril or if a pregnancy is a result of rape. There have been noted cases where doctors deliberately delayed approving abortions until the twelfth week when it’s too late to remove the fetus. Back in 2012, for example, officials tried to persuade a 14-year-old from opting out of an abortion after being raped. Another problematic incident transpired when a vision-impaired mother, Alicja Tysiąc, was forced to follow through with her pregnancy regardless of the dangers it presented to her eyesight. This brings up the question of human rights and whether or not Poland’s reproductive policies are disregarding Polish women’s wellbeing.

Interest groups such as the Stop Abortion coalition and think-tank Ordo Iuris are still actively trying to enact prohibitive laws against abortions. After all, they are the lobbyists responsible for presenting the Polish parliament with more than 400,000 signatures to start the bill in the first place. At first these groups’ endeavors were backed by the Catholic church. In the long run, though, the clergy could not promote a law allowing for the imprisonment of women and health practitioners.

Public opinion over abortion appeared to drastically change once the protests materialized. Recent polls indicate that the majority of Poles now disapprove of the ban, not to mention desire the existing set of reproductive laws to become more liberalized. The Economist says that today only 14 percent of Poles condone the original ban (in hindsight), making it highly unpopular among today’s general populace.

The participants of Black Monday may have set a new precedent for other countries with restrictive abortion laws, but pro-choice activists still have a lot of work cut out for them. Certain political parties are currently drafting their own anti-abortion bills and trying to push them into legislation. For example, it is reported that PiS is pushing for a “eugenic abortions” bill that would criminalize abortions for fetuses with abnormalities–meaning that the three existing stipulations for abortions would be dwindled down to only two. So far in PiS’s tenure in Polish parliament, the group has also cut state funding for in-vitro fertilization as well as drafted legislation to ban and criminalize the morning-after pill.

To prevent further “medieval regulations” from being placed on the agenda, Poland’s opposition party, Nowoczesna (meaning “modern” in Polish), have pledged to provide women with more reproductive freedom. The liberal party partnered with the Save the Women group to plan the Black Monday protests. According to them, illegal abortions could cease to exist if the Polish government decided to introduce sex education into the classroom, allocate state-funded contraception, as well as provide wider access to qualified doctors.

The Conversation: The Battle Over Abortion Rights in Poland is Not Over

The Guardian: Poland’s Abortion Plan Near Collapse After Mass Protests

NPR: Poland Backs Down on Abortion Plan After Extraordinary Protests

Vox: Poland Votes Down an Extreme Abortion Ban After Thousands of Women Go on Strike