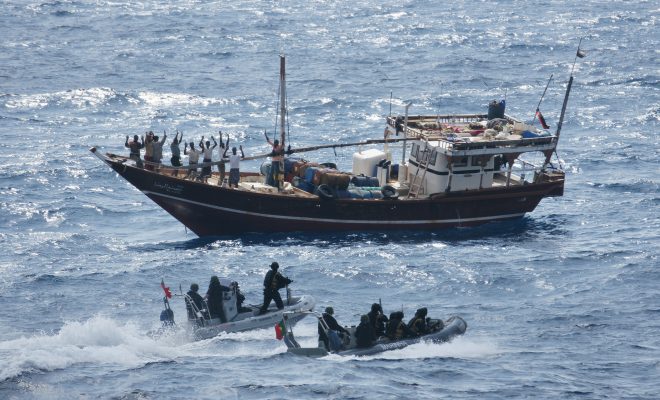 After Years of Decline, Piracy May Be on the Rise Again

Late April saw a major reversal in what had been a long-running trend. Piracy on the high seas–not including the latest “Pirates of the Caribbean” movie–may be back on the rise after years of decline. Although recent attacks marked the first major assaults on merchant ships in nearly five years, the location of the hijackings, near the Horn of Africa, was normal. However, there has also been a rise in the number of attacks on the West Coast of Africa as well. This all comes despite major efforts following a recent peak in piracy attacks in 2008-2011. Read on to find out why these attacks are happening again and if this latest wave of pirate attacks is the beginning of a new trend or just an isolated spike.

A Brief History of Piracy

Trying to trace the history of piracy is similar to trying to trace the history of other crimes like theft or murder in that there really is no identifiable start date. Nevertheless, most estimates place the beginning of the practice sometime between 1400 and 1200 B.C. near the southeastern coast of present-day Turkey. The practice continued throughout the years, involving every Mediterranean empire and many important historical figures including Julius Caesar.

Piracy was a major tool used by the Vikings and later by the English, most notably when the Queen of England commissioned Francis Drake to attack Spanish ships during a war. The United States had its first brush with pirates in the early 19th century when Barbary Pirates from North Africa attacked its shipments and demanded tribute, which ultimately led President Thomas Jefferson to send the navy to fight back. While the frequency of piracy decreased after that, it was never eliminated outright–it mostly just shifted regions, first to Southeast Asia and ultimately to what is now Somalia.

Piracy near the Horn of Africa clearly has a long history for a number of reasons. Recently, its surge has been the result of many factors, notably the region’s significant population growth and failing economy, which is the legacy of various colonial governments cutting up Somalia into disparate parts. Additionally, many of the pirates themselves–who are generally men between 20 and 35 years old–have few employment opportunities and view piracy as lucrative means of employment. In fact, piracy has actually led to the development of many other symbiotic industries such as communications, mechanics, and food production. Pirate crews are often formed along clan lines and some believe that an important part of the reason why piracy is so prevalent in Somalia is due to the amount of illegal fishing in Somali waters. Illegal fishing has significantly depleted the resources available and is likely part of the reason why the local economy does not offer enough opportunity to young men, which forces many to seek alternative means of making money.

The video below looks at piracy in Somalia and some of its underlying factors:

Regardless of the specific reason, piracy exploded in this region and peaked from 2008 through 2011. During this time, more than 700 merchant vessels were besieged. At one point in 2011, as many as 758 individuals were being held for ransom and the costs to the shipping industry were estimated to be higher than $7 billion. Piracy became such an issue during this period that one high-profile incident even became the subject of the blockbuster movie “Captain Phillips.”  But in 2012 this trend slowed dramatically and there were no major hijackings until earlier this year.

Although it seemed as if piracy in the area around the Horn of Africa just vanished, it was actually the result of several factors. These efforts started by land (and sea) with U.S. airstrikes and efforts by Kenyan security forces that pushed Al-Shabaab (Somalia’s Al-Qaeda offshoot) out of key areas, including the port of Kismayo. These actions along with efforts by local clans, which were irritated at the flashiness of the pirates, brought back some stability to the region.

The greatest effort, though, came from Task Force 151. As part of the U.S.-led force, NATO and the European Union sent ships to the area to protect merchant ships. This effort was joined separately by navy vessels from Russia, China, and India. The primary contribution made by these ships was deterrence, however, they did also attack coastal storage areas and capture pirates to bring in for trial. The coalition also shared vast quantities of information with merchant ships that proved very useful.

The merchant vessel operators themselves also contributed to the reduction in piracy through several actions of their own. According to Foreign Policy, those efforts include, “cruising at higher speeds, installed barbed wire on the lower decks, built ‘citadel’ safe rooms for crews, and toyed with foam machines, high-power water jets, and deafening sonic devices.” Notably, many also employed security teams, which usually consisted of people with military experience.

While it certainly seems like there was a reduction in piracy over the last few years, thanks to a variety of efforts, this may be somewhat misleading. Although Somali pirates generally refrained from attacking high-profile international targets since 2012, there have still been numerous attacks on smaller local fishing boats. In addition, some suspect that several attacks went unreported, suggesting the problem never really went away, but that rather it changed forms.

Regardless of what happened during that period, piracy is unquestionably an issue in 2017. For the first time in years, a major hijacking occurred off the coast of Somalia when pirates captured the Aris-13 in March. Somali pirates also hijacked an Indian commercial ship in April. Last year marked the first time since 2010 that the costs associated with piracy have gone up, reaching an estimated $1.7 billion. The reason for this spike has been attributed to several causes. One is declining vigilance on the part of shipping companies–the Aris-13, for example, did not have private security on board and was also cruising in dangerous conditions. Aside from the shipping companies, the spike has also been attributed to famine and drought in the area along with the continued lack of stable government and law enforcement in Somalia.

At the same time, piracy is also increasing on the coast of West Africa. Namely, pirate attacks off West Africa nearly doubled in 2016, according to a report from Oceans Beyond Piracy, an anti-piracy NGO. Most of these attacks have occurred off the coast of Nigeria and have focused on attacking the country’s oil infrastructure. The attacks from Nigeria stem primarily from the country’s criminal gangs. The tactics employed by West African pirates differs, however, from their Somali counterparts. While Somali pirates tend to target large ships, West African pirates seek out the crew then go into hiding until they receive ransom payments. Part of this has to do with the nature of the local government. Nigeria, unlike Somali, has a functioning government and military, which makes seizing large ships more difficult. The presence of a functioning state apparatus has also made the need for an international coalition, like the one in Somalia, less necessary.

Piracy is one of those concepts, similar to terrorism, where it often seems as if the international community is pursuing the incorrect, reactive approach. Namely, instead of taking a step back and asking why people engage in piracy, we try to target individual pirate leaders in the hope that defeating them will end the scourge. In other words, we treat the symptoms instead of looking at the underlying cause.

When rates of piracy went down, the international community pointed to increased vigilance and became complacent. With the threat seemingly neutralized, protection decreased and ships started employing fewer armed guards. Unsurprisingly, piracy returned and now the community must grapple with the same problems again. If the world at large hopes to be more successful this time, it must understand the history behind this practice, and more importantly, this divided region. Above all else, though, greater emphasis will need to be placed on the cause, or at least offer an alternative, rather than simply trying to kill a few leaders and assuming that will solve the problem.

If the U.S. and its global partners really want to end piracy they need to establish a secure and functioning state in Somalia and address the food problem there. In West Africa, there is less to do since there is a functional government in place and pirates rarely try to seize entire boats, instead focusing on ransom payments for individuals. In that scenario, however, the government may need to look into addressing the inequality caused by mineral wealth that has left certain groups wanting. There is no one universal approach, other than working to target the reason why piracy exists instead of just reacting when piracy occurs.

Michael Sliwinski
Michael Sliwinski (@MoneyMike4289) is a 2011 graduate of Ohio University in Athens with a Bachelor’s in History, as well as a 2014 graduate of the University of Georgia with a Master’s in International Policy. In his free time he enjoys writing, reading, and outdoor activites, particularly basketball. Contact Michael at staff@LawStreetMedia.com.
Share:
Related ItemsAfricaHorn of AfricaNigeriaPiracyPiratesSomalia