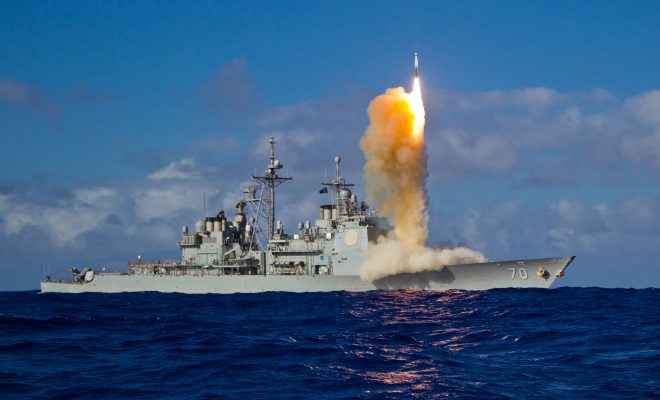 What Does it Mean for the U.S. to Put a Missile Defense System in South Korea?

The United States recently sent a missile defense system to South Korea in order to protect the country and deter its northern rival in the wake of repeated missile tests. However, the situation is complicated by the fact that while the United States and South Korea see the move as defensive, others in the region see it as aggressive. Specifically, China and Russia, along with North Korea, see it as an act of American belligerence meant to undermine their own deterrent capabilities. Arms races and missile defenses have a long history and their presence can often ratchet up situations as much as they calm them down. Read on to learn more about the history of missiles, missile defense, and the ramifications of these systems.

Crude rockets were developed all the way back in 13th century China. They were used occasionally over the next few centuries but were not heavily utilized because their paper or wood shells often made them inaccurate and they lacked enough power to cause major damage. This began to change in late 18th century India, when Tipu Sultan, leader of the Kingdom of Mysore, used metal-tubed rockets against the British. The metal tubes not only increased accuracy but also increased pressure, making them considerably more powerful.

Following this improvement, rockets started being used with increasing regularity. While missile testing and research advanced during World War I, modern missile technology would not be ready for a couple of decades. World War II saw an explosion of rocket use with the introduction of land-based, vehicle-based, and even human-operated rockets. Following the war, the two resulting superpowers began testing missiles with greater frequency and their respective ranges and destructive power gradually increased.

When it comes to missiles, several important distinctions can be made. The most basic distinction is between what separates a bomb from a missile. Bombs are unguided and have no propulsion system, whereas missiles do. There are two additional differences that determine the type of missile. Ballistic missiles have two phases, the first is the powered guided phase, during which the missile is propelled onto its given trajectory. Once the fuel runs out, the missile enters its second phase where it is essentially guided by the laws of physics. Ballistic missiles are very hard to intercept.

President Dwight D. Eisenhower’s administration began the missile defense program in response to the Soviets developing nuclear missiles. The first missile defense system was deployed by President Richard Nixon as a response to a Soviet defense system and in order to help the U.S. position in arms treaty negotiations. Support then dropped under President Gerald Ford, who saw the system as ineffective. Nonetheless, large expenditures continued under President Jimmy Carter and then ballooned under both President Ronald Reagan and President George H.W. Bush. The first Bush Administration finally cut back the missile defense budget following the collapse of the USSR and defense efforts were refocused on combatting accidental launches.

The current U.S. missile defense system consists of several parts, each of which focuses on missiles at a different stage of flight. The first stage of flight is the boost phase, which occurs when a missile is being propelled by an engine or fuel source. The second stage is the midcourse phase, which is when a missile is done launching and starts on its course to the target. Third is the terminal stage, which occurs when the missile reenters the earth’s atmosphere and continues until impact or detonation.

The five primary components of the U.S. missile defense system have different launch locations in order to intercept missiles in specific stages of flight. The ground-based system focuses on missiles at the midcourse phase. The Aegis Ballistic Missile Defense System, located on submarines, can intercept short, medium, and intermediate-range missiles during their midcourse phase. The Theater High Altitude Area Defense (THAAD) component is launched from a truck to defend against short and medium-ranged missiles during their midcourse and terminal phases. The Patriot Advanced Capability-3 (PAC-3) component is designed to defend against short and medium-ranged missiles in their terminal phase. Finally, the space-based surveillance system is attached to three geosynchronous satellites to provide information and early warnings of missile launches.

The United States is not the only country with a missile defense system. Russia also maintains its own system based around Moscow. In addition, several other countries have their own defense systems. For example, Israel has its “Iron Dome” system in place to protect against local attacks and other systems for long-range missiles. While a few countries have some form of missile defense, a larger number have missile technology and could conceivably develop missile defense capabilities. As of 2014, 31 countries had some form of ballistic missile technology, although the capabilities of some of those countries, such as Afghanistan, are currently in doubt.

While the placement of missile defense systems is often controversial, it is fair to wonder if all this concern over the installation of missile defense systems is warranted. The reason for this is two-fold. Every existing defense system is severely limited in comparison to the offensive capabilities of many countries. Specifically, the missiles used for defense cost much more than the offensive weapons, so there are fewer of them. The current cost balance means that it is considerably cheaper for countries to build new missiles than it is for the United States or any country to defend against them. Current systems are also not equipped to handle a strike as large as countries like Russia or China could potentially launch given their weapons stockpiles.

The other major issue is that defensive missile technology is not very reliable. This has been the case in the past too–the initial U.S. missile defense system was viewed as so ineffective that it was scrapped in 1974. This issue continued through the Gulf War when the Patriot System had a considerable difficulty intercepting fairly primitive Iraqi rockets. Even the current systems, in tests, have shot down less than half of the missiles they targeted since 1999. Because tests are typically done under ideal conditions, recent results have cast doubt on the effectiveness of the current system.

Despite the existing limitations of missile defense technology, these systems are still viewed as a threat by other countries. The thinking goes that they encourage the opposing side to build up their missiles to counteract the missile defense system, essentially creating an arms race. In the recent circumstances–both in Guam and now South Korea–China’s concern has focused on the radar technology included in the THAAD system, which China fears will be used to spy on it. While both the U.S. and South Korea have emphasized that the system is only there to protect against potential launches from North Korea, the Chinese have responded by placing economic sanctions on South Korea.

The accompanying video looks at the THAAD system and why China does not want it installed on the Korean Peninsula:

To counter fears of an arms race and other threats, numerous treaties have been ratified to reduce the number and types of missiles in the field. The most important treaty regarding missile defense was the Anti-Ballistic Missile Treaty signed in 1972. The purpose of this treaty was to prevent arms races by limiting defense systems that would neutralize attacks. The idea was that both sides having the ability to destroy each other would serve as a deterrent. If one side developed an effective missile defense system, the other would need to make faster or more lethal missiles, leading to a consistent buildup.

This logic was fairly effective and, along with the inability to develop an effective missile defense system, prevented the U.S. and the Soviet Union, and later Russia, from developing adequate defense systems. However, in 2002, the United States withdrew from the Anti-Ballistic Missile Treaty because it wanted to develop a more robust system. But all the United States has developed so far is an unreliable and expensive system that has still left many uneasy.

Missiles are an old and well-tested technology capable of delivering nuclear weapons around the globe with considerable precision. Conversely, missile defense is still relatively untested and often fails to provide what its name would literally suggest. Why then are certain parties so reassured by missile defense and others so agitated?

The answer is that every missile defense system is at the same time a missile launcher and when a system is close to a foreign border it makes the situation uncomfortable. It also forces the countries involved to continuously counter each other’s capabilities. This has been the case in several instances throughout history and will likely continue as long as adversaries are placing their missiles close to one another. While there have been treaties in place to address this issue, the most important one was nullified by U.S. withdrawal. The future then is likely to continue much as the present–barring one country or a group of countries offering to disarm.

Michael Sliwinski
Michael Sliwinski (@MoneyMike4289) is a 2011 graduate of Ohio University in Athens with a Bachelor’s in History, as well as a 2014 graduate of the University of Georgia with a Master’s in International Policy. In his free time he enjoys writing, reading, and outdoor activites, particularly basketball. Contact Michael at staff@LawStreetMedia.com.
Related ItemsChinaMissile DefenseNorth KoreaSouth KoreaWeapon Treaty