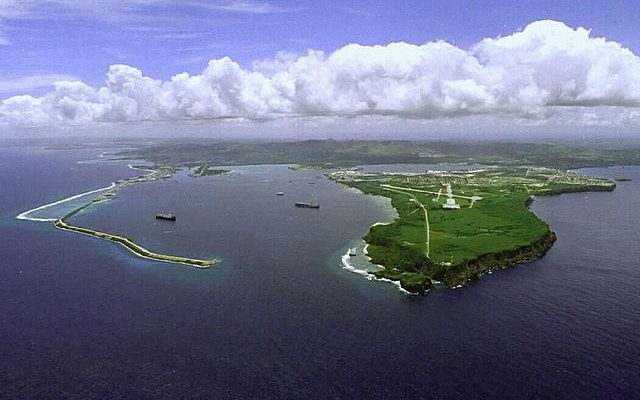 If for whatever reason you have been lucky enough to avoid the news over the past few days, then let me be the first to welcome you to the “fear of an imminent nuclear war”-phase of Trump’s presidency.

President Donald Trump warned North Korea on Tuesday against making any more threats against the United States and announced his own threat of “fire and fury like the world has never seen.” This came in response to a report in the Washington Post that said the country is now capable of creating missile-ready nuclear weapons, according to a U.S. intelligence assessment.

While he did use rather apocalyptic terms, Trump’s threat is not anything new. In fact, threats against North Korea are almost a presidential tradition. In keeping with the tradition, the country decided to call the president’s bluff within hours of his statement. Pyongyang announced on Wednesday that it is “carefully examining the operational plan for making an enveloping fire at the areas around Guam.”

But playing with Guam’s fate is not unusual for the United States. The United States’ historic treatment of Guam–and the fact that many people searched Google for Guam for the first time after this story broke–shows that the government does not really appear to care what happens to the island territory or its people.

Guam is a U.S. island territory located in the Pacific Ocean–about three-quarters of the way from Hawaii to the Philippines. The U.S. seized the island from Spain in 1898 to provide a fueling station for the U.S. fleet in the western Pacific and has been used as a base for military operations since. Navy and Air Force bases make up approximately 27 percent of the island’s mass.

Guam as it stands governs itself but its foreign policy–like who it trades with and goes to war with–is determined by the federal government, and its citizens pay many–if not, all–of the same taxes that Americans pay. However, they can’t officially vote in the presidential election–despite having a high voter turnout in a straw poll the territory’s government holds–and they don’t have a voting representative in Congress. If any of those traits sound oddly familiar, it’s because they’re very similar to what the 13 original colonies went through before the Revolutionary War. Remember colonialism, that thing we fought England over because we hated it so much? Turns out we have our own version!

That’s an over-exaggeration. Surely Guam’s status as a military hub means something?

The truth is it really doesn’t. According to Guam’s office of veteran affairs, at least one in eight adult Guamanians is a veteran–one of the highest rates in the country. This speaks volumes about their dedication to the country’s armed forces considering they don’t get a vote in choosing a commander-in-chief. The territory also ranked dead last in medical care spending per veteran in 2012. In many cases, the closest veteran care facilities are in Hawaii–just over 3,000 miles away.

Also the colonial comparison is not far-fetched. Just three years after Guam was taken from Spain and cemented as a U.S. territory–not a great start–the Supreme Court wrote a series of opinions. They became known as the Insular Cases and were focused on the territories gained after the Spanish-American War. They decided that even though the territories–Guam included–belonged to the United States, all the laws and rights of the U.S. did not apply because they were inhabited by “alien races” who wouldn’t be able to understand “Anglo-Saxon principles” and laws. In fact, the decisions were authored by the same justice who wrote Plessy v. Ferguson.

Ok that’s not great. But is cynicism the only thing you have to offer?

No. The most important fact about Guam is that it is home to 163,000 American citizens. While the reality of whether or not North Korea could actually pose a threat to the U.S. is debated on the mainland, concern for an attack is apparently growing on the island according to Mayor Paul McDonald.

“Especially with our elders who have experienced the Second World War, when the Japanese force came and invaded Guam — you know, my mom, she’s 91 years old and I was over at the office all day today,” McDonald said to NPR. “She’d call me every 10 minutes to update her. We are really taking it seriously, a lot of the people in Guam.”

Even citizens who have been ignoring threats for years are suddenly feeling a little bit concerned about how the tone in Washington has changed. One example is Todd Thompson, a lawyer who lives on Guam, who said he laughed off past threats because he “figured cooler heads in Washington would prevail, and it was just an idle threat.”

“But I have to say, I’m not laughing now,” Thompson said to the Associated Press. “My concern is that things have changed in Washington, and who knows what’s going to happen?”

When you combine the long history of mistreatment the territory has received from the federal government and the ego-stroking threats the president feels almost compelled to make toward an unstable leader, it’s hard not to be worried.

Gabe Fernandez
Gabe is an editorial intern at Law Street. He is a Peruvian-American Senior at the University of Maryland pursuing a double degree in Multiplatform Journalism and Marketing. In his free time, he can be found photographing concerts, running around the city, and supporting Manchester United. Contact Gabe at Staff@LawStreetMedia.com.
Share:
Related ItemsGuamNorth KoreaNuclear WarTrumpUS Imperialism