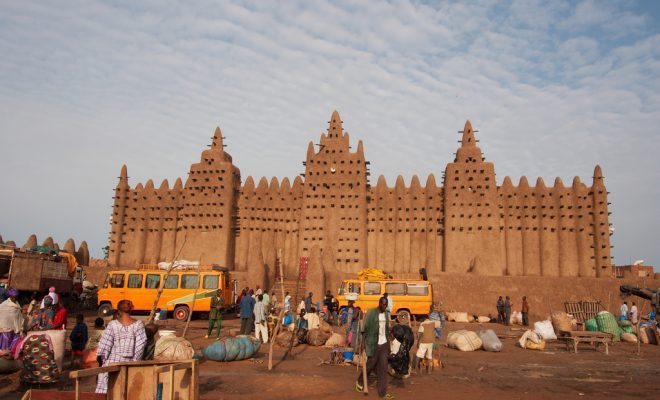 Mali: A Tale of Two Countries?

While the world mourned the terrorist attacks in Paris, another attack occurred in the African nation of Mali. Last Friday, terrorists took 170 hostages and killed 19 people at a Radisson Hotel in Mali’s capital of Bamako. The hotel allegedly was targeted because it was a popular place for foreigners. The group that claimed responsibility for the attack was Al Mourabitoun, a group associated with Al-Qaeda in the Islamic Maghreb. While the attack itself was a serious concern, for Mali it follows a series of troubling incidents that have included a rebellion, a coup, and several terrorist organizations, including one associated with the recent bombing, becoming increasingly aggressive, all within the least three years.

Kings in the North

The country of Mali has been populated for thousands of years by a hodge-podge of ethnic groups. It is also home to historically important places such as Timbuktu, once a regional center for trade and learning. The country became an important colony for the French during the 19th and 20th centuries. Following independence in 1960, Mali, like many other former colonies in Africa, experienced political and economic turmoil characterized by events such as coups and separatist movements.

Last week’s terrorist attack was not the first from an internal insurgency. The Tuareg, a group that has lived in the territory that is now Mali since 500 BCE have been fighting against the state for decades. The Tuareg people are a collection of nomadic groups spread primarily across three countries; Mali, Niger, and Algeria, and it’s important to note that there’s significant diversity within the group.

Their society is hierarchical with very clear roles for individuals. They were originally animists before the arrival of Islam in the region. The group determined to win independence for the Tuareg in Mali goes by the acronym MNLA or National Movement for the Liberation of Azawad. The video bellows gives a detailed look at the Tuareg and why they are rebelling:

Following independence in the 1960s, some Tuareg demanded their own autonomous region in the north, an area they dubbed Azawad. This first rebellion was over a perceived marginalization and repression of the Tuareg people by the more successful south. This led to a series of small-scale clashes, but the rebellion was ultimately crushed.

A second Tuareg rebellion followed in the early 1990s. This fight centered on many of the same issues. However, this time, the Tuareg group was able to win greater concessions and were more successful in battle. Some of this success can be attributed to some tribes’ years fighting and becoming battle-hardened in Libya for its then-ruler Muammar Gadhafi. Nevertheless, the main issue of Tuareg autonomy remained unsettled and led to a third rebellion. This third rebellion, which started in 2006, consisted more of hit and run type attacks by Tuareg fighters on Malian soldiers and failed peace deals.

The most recent rebellion began in 2012. In this case, battle-tested Tuareg rebels who had stolen large amounts of weapons from Libya once again attacked Mali soldiers. With their new weapons and alliances with various Islamic extremist groups, the Tuareg were able to make substantial gains this time, taking over the northern half of the country. Although these rebellions are divided into different campaigns, the Tuareg struggle has been going on so long that some observers regard them as one continuous fight with times of increased violence.

In 2012 Mali, like many other countries in Northern Africa and the Middle East, was also the site of coup. But unlike many of the others, which echoed the positive ethos of the Arab Spring, the Mali coup was different. First, in Mali, the man in charge was democratically elected and nearing the end of his term without any intention of running again. Additionally, those in charge of the coup were members of the military. But while military coups are certainly not rare, this one started from the bottom up with regular soldiers and low-ranking officers rebelling against the government. This is the inverse of the traditional pattern in which higher ranking officers, such as colonels or generals, are behind a revolt.

So why did this coup happen, and what explains its uniqueness? Much of that can be blamed on the rebellion in the north. Soldiers who had just been routed by the Tuareg were the ones who initiated the overthrow. These men were dissatisfied with how the Mali government was handling the insurrection, namely, at how they were ill-equipped to take on the Tuareg rebels, who were now well-supplied from weapons seized in Libya following Gaddafi’s collapse. The accompanying video gives a quick look at the coup in Mali and its immediate aftermath:

As has been the case in other countries that have experienced coups or rebellions since the Arab Spring, the movement against the government has also included radical elements, including those from recognized terrorist groups. In Mali’s case, despite the uniqueness of the coup itself, this same principle holds true.

Following the victories against the Malian government forces in 2012, a number of Islamic extremist groups got involved in the movement. This mix is made of five main groups; Ansar Dine, Movement for Unity and Jihad in West Africa (Mujao), al-Qaeda in the Islamic Maghreb (AQIM), the Signed-in-Blood Battalion, and the Islamic Movement for Azawad (IMA). Of these five, the two main and most active groups are Ansar Dine and AQIM.

Ansar Dine is the nationalistic Islamic group in Mali and it hopes to impose Sharia law across the whole country. The IMA is a splinter of this group, which broke off because it opposed the violent tactics of Ansar Dine and wanted to return to talks instead.

The other major player in the region is the AQIM. It also wants to impose Sharia Law on Mali, as well as erase the legacy of French colonial rule. It was created out of a combination of groups in 2007 and afterward it allied itself with Al-Qaeda. The Mujao and Signed-in-Blood Battalion are both off-shoots of this group. The Mujao wants to expand AQIM’s goals to all of the Western Africa. The Signed-in-Blood Battalion meanwhile, formed following a fallout between its leader and the AQIM. While these groups claim to be fighting for Malian interests the sect of Islam they represent, the Saudi sponsored Wahhabi, is in fact in conflict with that of the majority of Malians who are Sufi Muslims. Al Mourabitoun, the group that committed the recent hotel terrorist attack, is also associated with the AQIM.

Outside Influence and Peace

Role of the French

As Mali’s former colonial power, the French played a key role in the fight against the insurgency, as well as the recent terrorist attack and its aftermath.  In the instance of the 2012 rebellion, France sent in ground troops to launch a counter offensive as well as fighter jets, which launched airstrikes. These attacks, in concert with Malian efforts, were critical in the Malian government pushing back the extremists.

Additionally, during the recent attack by terrorists, elite French troops along with American counterparts, helped rescue hostages and kill the terrorists. However, the future of France’s role remains up in the air as it shifts its gaze to Syria, meaning less resources are available to assist the government of Mali. The following video gives an in-depth look at the French efforts in Mali:

End of the Conflict?

The most recent peace agreement was reached on June 20th, which called for a ceasefire and for Taureg rebels to give up the territory they had taken and the weapons they had acquired in Libya.  However, actual peace remains elusive. Rebels have continued to breach the ceasefire, thus preventing any further steps at reconciling the country. Furthermore, even if Mali can get the rebels to reach a peace agreement and more importantly honor it, they still have to deal with the various terrorist elements in the country–the hotel attack is just one example of the potential violence wrought by some of these groups. Unlike the Tuareg who want autonomy and greater governmental support, these groups’ motivation is often religious in nature and their demands are then much harder to meet.

Mali is the perfect example, and victim, of events beyond its control. If Gaddafi had not been killed in Libya, it is reasonable to wonder if the Tuareg, who had been repeatedly crushed by the government, would have ever made the gains they did. If the Tuareg had never been so successful, it is equally as likely that no coup would have occurred and then also no French involvement. Of course if the French had never made a colony out of Mali in the first place, it may have developed along ethnic lines instead of being welded to together unwieldy. However, Mali is also the victim of its own doings. If it had not tried to crush the Tuareg for so long or marginalize them, it may not have eventually felt there wrath. Additionally, if it had more strenuously confronted extremists it might have prevented their ideology from taking root and becoming so powerful as well.

In the case of Mali then, there are a lot of ifs and buts, however the reality is unmistakable. As the attack last week drove home the country is at war with extremists entrenched in its own borders and possibly on the verge of breaking in two, if it fails to honor the latest peace treaty. Only time will tell if Mali can navigate these perils.

The Guardian: Mali Attack: More Than 20 Dead After Terrorist Raid on Bamako Hotel

Global Research: The Crisis in Mali a Historical Perspective on the Tuareg People

Al Jazeera: What do the Tuareg want?

Michael Sliwinski
Michael Sliwinski (@MoneyMike4289) is a 2011 graduate of Ohio University in Athens with a Bachelor’s in History, as well as a 2014 graduate of the University of Georgia with a Master’s in International Policy. In his free time he enjoys writing, reading, and outdoor activites, particularly basketball. Contact Michael at staff@LawStreetMedia.com.
Share:
Related ItemsBamakoMaliTerrorist AttackTimbuktuTuareg