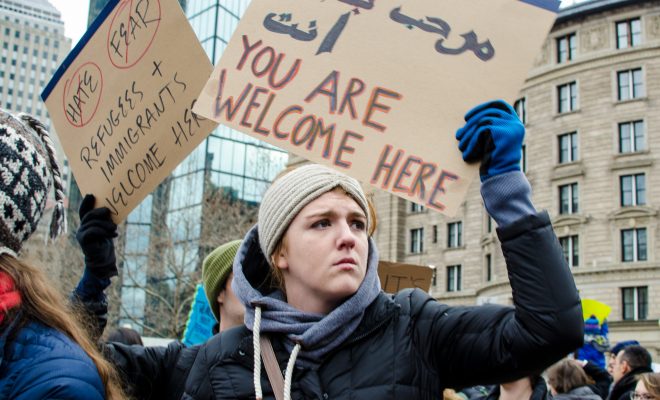 Hashtag of the day: #DeleteUber was trending over the weekend as the news was dominated by chaos and confusion over the Trump Administration travel ban. If you’re wondering what that hashtag stands for, check this out. Then read on for the latest rants.

On Friday, President Donald Trump issued an executive order, banning people from seven Muslim-majority countries from entering the United States. The order came abruptly and caused immense chaos at airports around the country, as people arriving from the affected countries were detained. Serious protests erupted, mainly at airports, and the move has been sharply condemned by, well, most people internationally.

It will probably have serious consequences in many ways. American academic institutions, hospitals, and businesses rely on experts and professionals from other countries. Iraq has already said it will retaliate. And an online petition in the U.K., aiming to keep Trump from making a state visit, quickly got over a million signatures.

IMAGE: Protests at airports across the United States pic.twitter.com/7OEqC9HtaT

Initially, the ban also applied to green card holders and people with dual citizenship. Stories about students being stranded after a vacation or people unable to get home flooded the media over the weekend. An Iraqi man who worked as a translator for the U.S. military for a decade was detained for 18 hours at JFK Airport in New York.

As of now, it appears that no one is being detained or held at an airport anymore and there have been exemptions for 392 green card holders who have been allowed into the country. Fifteen attorneys general have issued a statement condemning Trump’s actions, calling it an “unconstitutional, un-American and unlawful Executive Order.” There is still confusion over what the order will actually mean, but the courts, big companies like Google and Facebook, celebrities, and ordinary citizens are all fighting back.

The synagogue where President Trump’s grandchild goes to preschool has condemned his travel ban https://t.co/jpunSV0ReA pic.twitter.com/0GbC3AM3ZG

Emma Von Zeipel
Emma Von Zeipel is a staff writer at Law Street Media. She is originally from one of the islands of Stockholm, Sweden. After working for Democratic Voice of Burma in Thailand, she ended up in New York City. She has a BA in journalism from Stockholm University and is passionate about human rights, good books, horses, and European chocolate. Contact Emma at EVonZeipel@LawStreetMedia.com.
Share:
Related ItemsBitcoinDomestic ViolenceDonald TrumpHackersMosqueMuslimRussiaTerrorist AttackTravel Ban