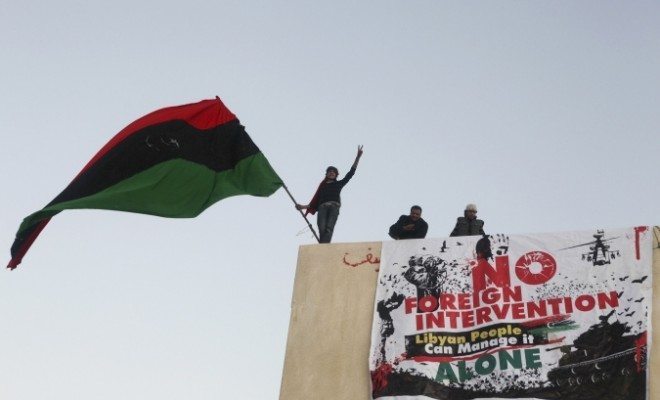 Looking Back: Lessons From the Intervention in Libya

Muammar Qaddafi, longtime leader of Libya, was the first leader to be killed in the Arab Spring–the wave of uprisings that swept the Middle East demanding the end of autocratic ruling. The United States and NATO military forces executed a military intervention in Libya to remove Qaddafi as leader. After its immediate action, the event became the primary example for what a successful intervention looks like. But now, four years have passed, and there’s an essential question often posed: did the intervention really make things better?

While it’s difficult to answer that question, Libya’s path post-intervention demonstrates that just because you give people the opportunity for change, does not mean they have the tools or infrastructure to do so. In many ways, the situation in Libya has gone from bad to worse, and continues to raise concerns about the efficacy of the intervention.

Who was Muammar Qaddafi?

Just two days after the overthrow of President Ben Ali in Tunisia, Libyan demonstrators were throwing stones at a government building and set fire to its offices. The protesters were demanding “decent housing and dignified life.” Libyan opposition websites flourished, and social media was optimized to revolt against Qaddafi. But who exactly was the maligned leader?

Muammar Qaddafi governed Libya as its primary leader for 42 years, from 1969 to 2011. Through his tenure, he was known for supporting public works projects, such as the Great Man-Made River project, which brought water to the arid north of Libya. He was known to redistribute wealth, and provided loans at a zero percent interest rate.

He was also branded an abuser of human rights. He was accused of administering the murder of more than 1,000 prisoners–mainly political opponents–at the Abu Salim prison. Qaddafi was also linked to both the bombing of Pan-Am flight 103 over Lockerbie, Scotland in 1988 that resulted in the loss of 270 lives, and the murder of police officer Yvonne Fletcher in central London in 1984.

Qaddafi did fit the bill as an authoritarian ruler. As a result, the possibility of toppling the government, just as Egypt’s Hosni Mubarak and Tunisia’s Ali had been toppled, was too strong for the Libyan population to resist.

Libya was in uproar during the Arab Spring. Opposition rebel forces were mobilizing quickly, and the Qaddafi regime fought back. Among the international community, the question was raised–should someone intervene?

Following the tragedies in Rwanda and the Balkans in the 1990s, the international community debated how to effectively react when a nation systemically violates its citizens’ human rights. Essentially, do states have unconditional sovereignty over their own affairs–no matter how inhumanely events may occur–or can the international community legally intervene for humanitarian purposes?

In 2001, the expression “Responsibility to Protect” (R2P) was first presented in response to this debate over the ethics of international intervention. The R2P report outlines that the state is responsible first for the protection of its own citizens within its borders; if the state fails, either through lack of ability or a lack of willingness, the responsibility to protect will shift to the international community through humanitarian intervention or effort.

The United Nations Security Council, a group of 15 countries including five permanent members–the United Kingdom, United States, France, China, and Russia–demanded an immediate ceasefire in Libya. This included an end to the current attacks against civilians, which it said might constitute “crimes against humanity.”

The Security Council authorized U.N. member states to take all necessary measures to protect civilians under threat of attack in the country.

Two days after the UN authorization under R2P, NATO-U.S. forces imposed a ban on all flights in the country’s airspace, a no-fly zone. Sanctions were tightened on the Qaddafi regime, and the bombing on Qaddafi forces began. Seven months later, in October 2011, after an extended military campaign with sustained Western support, Libyan Opposition forces conquered the country.

Qaddafi was trying to flee the city in a convoy of cars when he came under attack from NATO jets. A mob captured him on the ground, led him through the streets and shot him twice. The French claimed responsibility for the airstrike.

Why did NATO-U.S. Forces Intervene?

There were three fundamental choices. The first was to do nothing and witness a possible humanitarian nightmare. The second was to intervene with a limited approach–essentially assist in the takedown of current government, but not the building of a new government. The third option was to intervene with a complete approach, including staying to help stabilize and build the new government.

The United Nations Security Council decided the U.S. should not allow a humanitarian nightmare to happen if it could be prevented with a relatively simple military intervention. Any presence on the ground to stabilize the conflict probably would not have been welcomed, and it may not have worked any better than it did it in places such as Iraq or Afghanistan. So, the second option was chosen–remove Qaddafi as leader in order to allow the Libyan people time to bring in a new authority.

Additionally, it was a multilateral effort. NATO forces actually led the attacks, not the United States. Additionally, Libyan rebel forces were well organized and located near port cities, which made communication and importing goods easier.

Why was it deemed successful?

There were three targets outlined as a part of the NATO-U.S. strategy: ensure there was an arms embargo enforced on Qaddafi; protect the people being attacked by Qaddafi’s forces; and buy some time and space for Libyan people to decide their own future. These goals were fulfilled in a timely manner, with no American lives lost. Automatically, NATO-U.S. forces declared success.

How is Libya Now?

Unfortunately, by many measures, Libya is now in worse shape. There’s activity from militias affiliated with terrorist groups like al-Qaeda and ISIS.

The U.S. may have mitigated the event of a mass killing, but now the region is destabilized–affecting education and literacy, employment, gender equality, and the possibility of institution building, among other things. The following video outlines the difficulties that the Libyan people are facing currently.

So why didn’t we stay in Libya?

Given the political environment in 2011, animosity toward American foreign forces were a concern. This fear led American and European leaders to set a limit the extent of intervention. In addition, the U.S. could have been accused of forcing Western and democratic ideals in a vulnerable country. Security and foreign policy decision makers are constantly riddled with what to do. There is a huge dilemma when it comes to legal and moral humanitarian intervention. In 20/20 hindsight, any decision can be found faulty.

Libya’s case is far from perfect, but not necessarily wrong. It’s very easy to criticize the actions taken, because, yes, Libya may very well be worse off. On a global level, there are steps that could be taken to prevail the challenges to humanitarian intervention. The Security Council permanent members are faced with a difficult conundrum. It becomes increasingly difficulty to determine how to intervene–in what capacity does the international community take over another nation? It’s a question that had to be considered in Libya’s case, and will continue to come up time and time again.

Council on Foreign Relations: The Challenge Of Humanitarian Intervention Since Rwanda

Council on Foreign Relations: Libya and the Responsibility to Protect

First Look: Hailed as a Model For Successful Intervention, Libya Proves to Be the Exact Opposite

Guardian: Muammar Gaddafi, the ‘King Of Kings,’ Dies in His Hometown