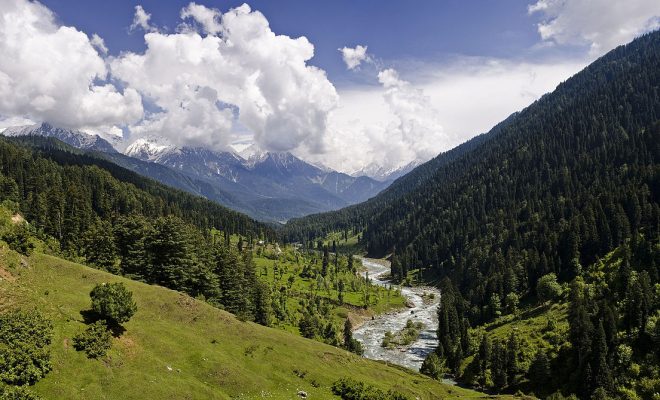 In mid-April, protesters in the Indian-controlled part of Kashmir clashed with Indian soldiers, leaving at least eight dead and more than 200 injured. This came in the wake of elections held in Kashmir that saw only 7 percent turnout, the lowest in 27 years. That record was quickly broken in a re-scheduled election in which only 2 percent of people voted. These are just the latest developments in the conflict over Kashmir between India and Pakistan, which has lasted decades. This conflict is compounded by a number of other issues, such as both countries’ nuclear power status and the involvement of China. Read on to find out more about the Kashmir conflict, its impact on India-Pakistan relations, and how it may eventually be resolved.

Background: A Look at Kashmir

The region of Kashmir has been disputed territory between India and Pakistan since 1947, following British rule and the partition of British India. India, which borders the region to the south, controls the south and southeastern parts called Jammu and Kashmir. Pakistan controls the northern and western parts (and since 1962, China has controlled the northeastern portion). The Indian and Pakistani zones are separated by the Line of Control.

Despite being controlled by India, which is predominantly Hindu, half of Jammu and the entirety of Kashmir are majority Muslim areas. Both religions have long roots in the region, with Hinduism dating back to the area’s early history and Islam coming in the 14th century via Muslim conquerors. The area was also intermittently ruled by Afghan Warlords and Sikh princes.

The video below describes how the borders formed over time:

Although Hindus and Muslims had coexisted relatively peacefully for centuries, conflict quickly gripped the area following independence. The origin of the conflict can be traced back to the choice of the Maharaja Hari Singh of Kashmir. At the point of independence, the Maharaja hoped to remain independent, however, he was ultimately forced to choose between joining either India or Pakistan thanks to an armed revolt within the region. Despite ruling over a majority Muslim area, the Hindu Maharajah decided to side with India.

The Maharajah’s decision allowed India to justify sending troops into the region. Originally it was supposed to be a temporary move, with the ultimate goal of holding a local vote to decide who would be in charge. The conflict continued and in 1948 the United Nations got involved at India’s request. The U.N. Security Council passed a resolution calling on Pakistan to withdraw its forces from Jammu and Kashmir while allowing India to maintain a small military presence. Pakistan refused and the vote that was supposed to determine the fate of Kashmir never took place. But in 1951, elections did proceed in the Indian-controlled portions of Kashmir and Jammu.

Fighting picked up again in the 1960s and 70s, but the first conflict was between China and India in 1962. Chinese forces quickly defeated Indian troops and took control over the region they dubbed Askai Chin. Their territories were separated by the Actual Line of Control, which is different from the similarly named line between Indian and Pakistani Kashmir.

India and Pakistan re-engaged in heavy fighting in 1965 and 1971, following years of unrest in the region. In 1971 the Indian army decisively defeated their Pakistani antagonists. This led to the Simla Agreement that called on both parties to solve matters peacefully and clearly designated the Line of Control. However, in reality, this did not stop the violence. The continuing conflict was carried out by insurgency groups from Pakistan, who flooded into Indian Kashmir to fight against its occupation. There was also the Kargil War of 1999 that nearly led to a nuclear conflict.

The peace process in Kashmir has been ongoing nearly as long as the conflict. There were the ceasefires in 1948 and 1971, however, neither fully stopped the fighting and were largely ineffective. During the 1999 Kargil War and during a period between 2001 and 2002 there were also fears that renewed conflict between India and Pakistan would lead to a nuclear confrontation. Luckily, due to international interference primarily by the United States, the crisis was averted.

More recently, progress was made in what is known as the “composite dialogue,” which began in 2004. This dialogue ultimately ended with the Mumbai bombing in 2008. However, the goals accomplished during the talks, such as a ceasefire at the line of control and passage across the line of control, endured.

Despite this progress, the region once more experienced a surge in violence following the 2008 attack. After a couple years, relations began to improve and in 2012, the President of Pakistan met with the Indian Prime Minister to hold the first high-level talks in nearly eight years. But hope for progress was quickly dashed after India’s decision to execute both the last remaining Mumbai attacker, as well as a Kashmiri convicted in a 2001 attempted bombing of India’s parliament, led to renewed violence.

This situation may also have been exacerbated by the construction of a border fence beginning in 2003. While the numbers suggest the fence has been successful in reducing infiltration by potential militants, it also has its drawbacks. The fence may simply be diverting them to other areas and it is expensive to maintain, as large portions have to be rebuilt after each winter.

Further controversy arose after there were rumors that India planned to build a more solid wall in 2015. Specifically, in 2015, Pakistani officials went to the United Nations and claimed India was planning a 10-meter high, 135-foot wide wall along the entire 197-kilometer border in an effort to make the Line of Control the permanent border in Kashmir (Pakistan does not view the Line of Control as a legitimate border). India denied the claim and the wall never materialized.

India has also installed something known as a “laser wall” in Jammu within Kashmir and along other parts of its border with Pakistan. This technology is able to detect movement and is useful in places where the topography makes it hard to build a physical fence.

The current situation continues to be unstable in light of the recent disputes detailed above. This includes the election chaos from April and protests in May after a militant commander was killed by Indian security forces. There have also been repeated episodes of violence along the Line of Control, along with violence in both countries’ territories. The two sides are also quarreling over the status of an alleged Indian spy whose fate is being decided by the International Court of Justice.

Given the persistent conflict, what is the most likely outcome for this region? An article from the BBC details seven possibilities, ranging from variations of India and Pakistan taking over all or part of the region to Kashmir achieving independence. However, for any of these scenarios to take place, one side would need to give up territory, which has become unlikely amid renewed tension.

China, meanwhile, might also have a major role to play in the region’s future. China, whose own claim to Kashmir already played out in a successful war against India, recently signed a $500 million deal with Pakistan. This is just part of a much larger $57 billion deal between the two countries to create a China-Pakistan Economic Corridor in part of China’s even larger One Belt, One Road Initiative. The plan includes rail lines that would run directly through the contested territory. In response, India refused to even send an official delegation to a recent summit in Beijing.

The conflict over Kashmir between India and Pakistan, and China to a much smaller degree, has dragged on for decades and cost tens of thousands of lives. Both sides have legitimate claims to the region. For India, it is simply enforcing the decision of the Maharajah dating back to the 1940s. For Pakistan, it is about incorporating a majority Muslim region into a Muslim nation. Both nations also have significant issues with their adversary’s position–India claims Pakistan seized the areas under its control illegally, while Pakistan states that the Maharajah’s original decision was made under duress and is therefore invalid.

Regardless of the reasoning, the combined populations of India and Pakistan are more than one-fifth of the world’s total, and both countries possess nuclear weapons. Thus, it is imperative that the two sides negotiate some sort of a deal or even agree to a third option where Kashmir is independent. Reaching that agreement has proved elusive and with the involvement of other countries, like China, it may prove even more challenging. The situation in Kashmir is reminiscent of the deadlock between Israel and Palestine and unfortunately shows just as few signs of being remedied in the near future.

Michael Sliwinski
Michael Sliwinski (@MoneyMike4289) is a 2011 graduate of Ohio University in Athens with a Bachelor’s in History, as well as a 2014 graduate of the University of Georgia with a Master’s in International Policy. In his free time he enjoys writing, reading, and outdoor activites, particularly basketball. Contact Michael at staff@LawStreetMedia.com.
Share:
Related ItemsChinaIn the News NowIndiaKashmirPakistanTerritorial DisputeUnited Nations