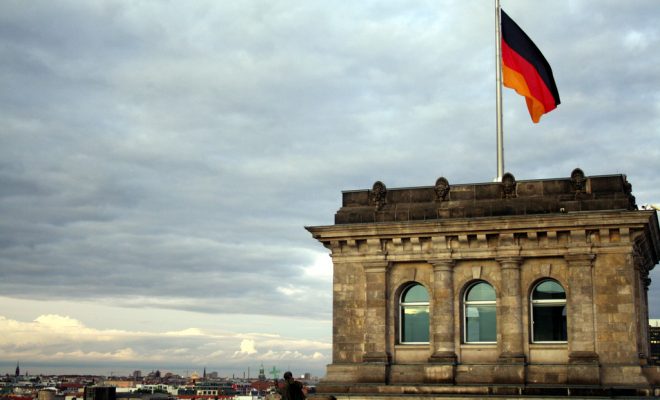 During a vacation to Berlin, a pair of Chinese tourists stopped at the historic Reichstag building and took photos performing the infamous Nazi salute. The duo were promptly detained by the German police on the scene and held on a bail of 500 euros for violating a German law aimed at distancing the nation from its horrific mid-20th-century history.

Police guarding the building, which now houses part of the German Parliament, noticed the tourists taking turns posing and snapping pictures and promptly intervened, according to their statement. The pair, a 36-year-old and a 49-year-old participating in a European tour, were allowed to return to China with their group even though their crime could carry a three-year sentence, according to the Washington Post.

The Reichstag is a particularly sensitive location because of its role in the Nazi rise to power. When the Reichstag caught fire in 1933, Adolf Hitler and the Nazi party blamed the fire on Dutch Communists and used it as leverage to access more power. In 2011 a Canadian tourist was also arrested and fined for performing the salute in front of the building, according to the Washington Post.

The incident is yet another example of Germany, and other European nations, criminalizing and condemning Nazi history and its recent resurgence. In this case, the tourists violated provisions of the German criminal code instituted after World War II that ban the salute and many other Nazi symbols, signals, and materials.

Since the war ended, Germany has made strides to distance itself from its history and to educate the new generations on the mistakes made by previous generations. The German public school system has a comprehensive education program on the Holocaust that has only gained momentum in the past few decades, according to PBS.

Nazi flags and symbols are banned across nearly every major country in Europe including Austria, Hitler’s home nation. Earlier this month the Switzerland Supreme Court upheld a conviction of a man performing the salute and yelling “Heil Hitler” outside of a Jewish synagogue in Geneva, according to the New York Times.

Not only is Europe cracking down on the distasteful behavior, but the Chinese government is worried as well. The government is testing out new systems to persuade its people to respect local laws and customs when traveling abroad. One new system would keep track of troublesome tourists and rank them based on severity of their behavior while reminding them to behave properly when they land, according to the Washington Post.

So while the behavior may not surprise the Chinese government, it is certainly frustrating for European nations, and particularly Germany, to constantly deal with tourists making ill-advised Nazi references. As the world sees a resurgence in white nationalism and racial strife these instances are part of a larger global problem that likely has no end in sight. Countries across the globe must tackle issues of discrimination, racism, and their individual histories that are often filled with those same problems.

Josh Schmidt
Josh Schmidt is an editorial intern and is a native of the Washington D.C Metropolitan area. He is working towards a degree in multi-platform journalism with a minor in history at nearby University of Maryland. Contact Josh at staff@LawStreetMedia.com.
Share:
Related ItemsAdolf HitlerAnti_SemitismChinaChinese TouristsGermanyNaziNazi SaluteReichstagSwitzerlandTourismWhite Supremacy