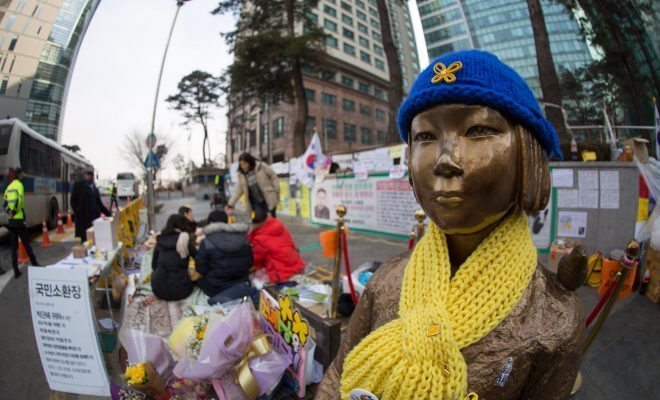 On December 28, 2015, South Korea and Japan entered into a monumental agreement as the countries addressed the injustices made against “comfort women“–approximately 200,000 South Korean women who were recruited into prostitution and servitude by the Imperial Japanese Army during World War II. Women, some as young as 11, were kidnapped during this time, forced into sexual bondage and servitude where they were raped, tortured, and subjected to extreme violence by Japanese soldiers in “comfort stations” found in Japanese military camps. To date, this barbaric and horrific behavior left an open, festering, and unaddressed wound causing heavy tensions between the two nations for several decades.

The agreement reached required action on both sides as Japan admitted that it was “painfully aware of responsibilities from this perspective,” referring to the attack on the women of South Korea’s honor and dignity. Japan sincerely apologized–something it was not willing to do before as it questioned whether it was responsible for the development of “comfort women,” and additionally, it agreed to provide ¥1 billion ($8.3 million) in government funds to the South Korean women subjected to prostitution during WWII by the Japanese Army. In compliance with the agreement, South Korea agreed to accept the monetary compensation through a fund rather than a direct compensation to the women who had suffered so that the “money didn’t represent direct compensation for wrongdoing.” Critics of the agreement noted that the development of a fund rather than direct compensation was Japan’s way of avoiding the recognition that the women recruited into prostitution were done so “by the Japanese government and military systematically.”

Regardless of criticism, the landmark agreement reached between Japan and South Korea is a big deal for human rights. While forced prostitution, sex slaves, and human trafficking in Asia may not call for direct attention from the West, the trade is a massive violation of human rights and a booming business–as it is “the fastest growing industry in the world, and the second largest business after arms dealing in the 21st century.” Read on to learn more about “comfort women,” the wound left by the Imperial Japanese Army following WWII, and the attention that comfort women have brought to the human trafficking violations occurring today.

In August of 1910, Japan annexed the sovereign nation of what once was Korea and begun its 35-year-long imperial hold over the area and its people. In 1931, Japan launched what presumably would be noted as the start of WWII with its invasion of Manchuria, which ultimately led to its progression through China and Southeast Asia.

During this time, Japanese soldiers began to develop areas within their military camps dubbed “comfort stations” where they would be able unwind after long days of fighting and obtain sexual services. These stations were full of kidnapped and imprisoned women that were raped and forced to service soldiers dozens of times per day.

Japanese soldiers largely recruited women from Korean communities by luring them with promises of good jobs in big cities. Their dreams quickly came crashing down as they were locked up in three foot by five foot rooms in Japanese military bases and suffered the harshest of conditions–forced into sexual servitude, which at certain times could reach up to 60-70 encounters with soldiers per day. As war ensued, the Japanese military’s numbers increased and the soldiers began raiding villages and simply taking women as they pleased and killed anyone that stood in their way or protested against their behavior. The more need or desire that was expressed by the soldiers, the more brutal and barbaric the recruitment and treatment of comfort women became. Furthermore, women were cramped into tight spaces only separated by a tatami or a mat that did not reach the floor leaving the women exposed to others during rapes and beatings and allowing for sound to travel easily from cubicle to cubicle.

Accordingly, to ensure that a young woman was a virgin or of very immature sexual status and development, Japanese soldiers specifically targeted young women between the ages of 14-18. Women who tried to fight for themselves ended up dead or sterilized. Survivors of these horrendous crimes recounted the following:

We had to serve over 5,000 Japanese soldiers as sex slaves every day – up to 40 men per day. Each time I protested, they hit me or stuffed rags in my mouth. One held a matchstick to my private parts until I obeyed him. One Korean girl caught a venereal disease from being raped so often and, as a result, over 50 Japanese soldiers were infected. In order to stop the disease from spreading and to ’sterilize’ the Korean girl, they stuck a hot iron bar in her private parts. –Testimony of Chong Ok Sun

One day, a new girl was put in the compartment next to me. She tried to resist the men and bit one of them in his arm. She was then taken to the courtyard and in front of all of us, her head was cut off with a sword and her body was cut into small pieces. –Testimony of Hwang So Gyun

Venereal disease and fear of pregnancy plagued the women that were forced to service Japanese soldiers. One woman recollected that her son was born mentally handicapped because of the numerous diseases she had caught during her servitude. They were also expected to continue serving even through their menstrual cycle. The “Ten Day Report of the 21st Army Unit of the Japanese Army stationed at Kwandong, China, from 11 to 21 April 1939″ highlighted the fact that approximately 1,000 “comfort women” served 100,000 soldiers in that specified region during that time. Their service was required even in the harshest, most unacceptable of conditions, otherwise, these women met death.

Due to the lack of specific and official documentation, many of the injustices done to the young women kidnapped from their homes in Korea during WWII were not addressed. Very few documents throughout the course of history have directly been linked to the Imperial Japanese soldiers’ barbaric behaviors and actions. The substantive and now recognized facts pertaining to the recruitment and treatment of comfort women during this time was easily refuted post WWII as it was only recollected testimony from the victims and survivors themselves.

This is precisely why Japan long refused to acknowledge that it was responsible for the horrors done to comfort women. As decades passed and South Korean survivors demanded an apology without avail, Japan continued to ignore or defend its soldiers’ reprehensible acts. This emotional and dark past drove territorial disputes and in some cases caused the nations to work against each other on issues that threatened both due to geographical and geopolitical standing, such as “North Korean belligerence and Chinese assertiveness.” Japan and South Korea’s move to formulate an agreement and put the dark past behind them has allowed for some people of South Korea to feel as if justice was finally served and granted the two nations the ability to move forward in cooperation.

It’s very difficult to estimate the exact number of modern-day human trafficking victims however, current data finds that approximately 36 million people are being trafficked, nearly 2/3 coming from Asia. While this industry is dark and dirty, it keeps growing because the revenue generated has totaled approximately $150 billion in profit. The international community has, to date, been unsuccessful in tackling human trafficking, both sex and labor trafficking, due to its inability to decipher the populations being affected, the geographical locations that face the most dire circumstances, how to properly define the issue, and how to enforce the agreements that have been in place but fail to be followed by local law enforcement of the regions suffering. The fact that it took Japan several decades to recognize its injustices and begin the reconciliation process with South Korea and its victims highlights the difficulty in showing harm done and getting all parties to listen for a meaningful resolution.

Weak national legislation and corrupt government conduct has contributed to the growing human trafficking problem in Asia. For example, all Association of Southeast Asian Nations, or ASEAN, are part of the “Bali Process on People Smuggling, Trafficking in Persons and Related Transnational Crime,” which is a non-binding and voluntary forum created in 2002 that is co-chaired by the governments of Indonesia and Australia. Even with their involvement in such forums, and considering the fact there are only a few ASEAN nations that have yet to pass anti-trafficking laws, there is still a growing challenge in getting these countries to take practical action to combat human trafficking–funding for projects that are not a priority is next to impossible. Trying to find funding for such projects in nations where poverty levels are high and government funds depleted poses a significant challenge to victimized and suffering communities.

Human trafficking is not simply a problem to throw money at–it requires a plan with a solution, education of victims and law enforcement, and an adequately functioning government that will enforce the laws and procedures that it has agreed to regarding trafficking. The issue ultimately becomes local level enforcement, something that the international community has desperately failed to resolve.

While absolutely nothing will free these survivors of the grotesque crimes they endured, Japan’s recognition of the injustices done to South Korean women during WWII is a step forward in reconciling the deep and unapologetic wound left by Japanese soldiers, one that had thus far been denied altogether or swept under history’s rug. The agreement made between Japan and South Korea at the end of December not only sought to right the wrongs made at the hands of Japanese soldiers, but brought to light the horrors of human trafficking and modern day slavery that still largely exists in Asia.

Regardless of the difficulties that human trafficking presents for both survivors and advocates, it is clear that the agreement between South Korea and Japan has placed the horrors of sex trafficking and forced prostitution on a recognizable world stage, particularly by the West. It has worked to restore a sense of dignity and humility back into the lives of former comfort women that are still living today with the scars of a dark and unimaginable past and sought to provide funding to survivors in South Korea for the wrongs endured.

The Huffington Post: The History of ‘Comfort Women’: A WWII Tragedy We Can’t Forget

Ajla Glavasevic
Ajla Glavasevic is a first-generation Bosnian full of spunk, sass, and humor. She graduated from SUNY Buffalo with a Bachelor of Science in Finance and received her J.D. from the University of Cincinnati College of Law. Ajla is currently a licensed attorney in Pennsylvania and when she isn’t lawyering and writing, the former Team USA Women’s Bobsled athlete (2014-2015 National Team) likes to stay active and travel. Contact Ajla at Staff@LawStreetMedia.com.
Share:
Related Items"Comfort Women"Forced ProstitutionHuman TraffickingJapanSex SlavesSouth KoreaWorld War II