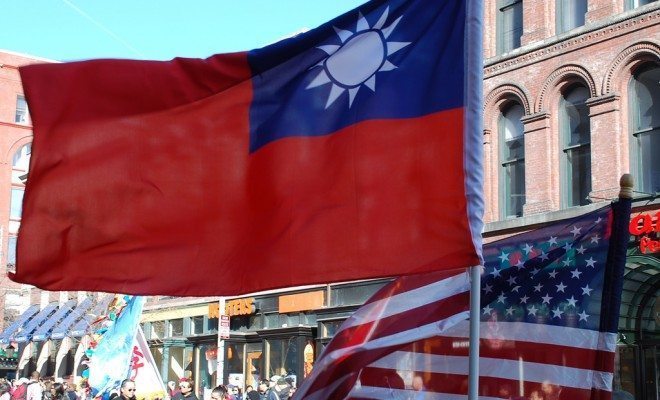 China and Taiwan: A Balancing Act For the United States

Since 1949, China and Taiwan have been considered by various parties either part of a single nation or two distinct countries. In this confusing existing dynamic, Washington has often acted as a go between. The United States has mainly balanced the two actors by maintaining its military dominance and deterring Beijing, while simultaneously boosting Taipei’s defense capabilities. Read on to learn about the history between China and Taiwan, the conflict that separates them, the United States’ role, and the current status.

Origin of the Conflict

It all started with two political parties and one civil war.

Chiang Kai-Shek was the leader of the Kuomintang (KMT) party of Chinese Nationalists. In 1927, he led an exploration to the north of China in the hope of dismantling the Chinese Communist Party (CCP). The nationalist KMT almost defeated the CCP altogether, but ten years later Japan, desiring more power leading up to World War II, derailed KMT forces and completely disrupted the Chinese civil war. Japan was fighting both the KMT and the CCP, but the KMT took harder hits.

Upon Japan’s loss in WWII, the United States forced Japan to surrender Chinese land back to the KMT, including the island Japan had taken over. It was called Fermosa, and is the land that later became Taiwan.

Even with the support of the U.S. post-World War II, the KMT had suffered too many casualties against Japan. Using grassroots support, rising leader Mao Zedong strengthened communist ideologies, recruited soldiers from the countryside, and formed the People’s Liberation Army (PLA). Eventually with the rallied forces, the CCP took the KMT capital of Nanjing. Finally KMT leadership fled to Taiwan in 1949 and founded the Republic of China (ROC), or Taiwan.

With the KMT off the mainland, Mao Zedong declared the People’s Republic of China (PRC), naming Beijing the capital. Still led by Chiang Kai Shek, the KMT declared Taipei its capital, but still held its claim to mainland China.

In 1955 when the first Taiwan Strait Crisis took place, the United States sent troops to the strait because it was against the mainland Chinese communist regime taking over Taiwan.

The U.S respected the ROC because of its similarities with the U.S. political regime. At the time, ROC was represented at the United Nations and had a permanent seat on the Security Council. It was during this time that Congress agreed the U.S should provide Taiwan defense and support if Taiwan-China relations ever erupted violently.

But tensions remained high between Taiwain and mainland China. The two groups even came to an arrangement in which they would bomb each other’s garrisons on alternate dates. This continued for 20 years until the United States assisted in creating more normalized relations.

In 1971, the PRC procured the “China” seat at the United Nations through rallied power, replacing Taiwan. The United States declared that it “acknowledges that all Chinese on either side of the Taiwan Strait maintain there is but one China and that Taiwan is a part of China,” in what is known as the Shanghai Communiqué of 1972. In the communiqué, finding language that both mainland China and the U.S. could accept was crucial to establishing diplomatic relations. The United States agreed that it would henceforth have only “unofficial” relations with Taiwan.

This left the United States with a problem–many believed that the U.S., as the guarantor of peace in Asia, had a moral obligation to provide some protection to Taiwan. To remedy this, Congress in March 1979 passed the Taiwan Relations Act (TRA). The TRA declared that it is U.S. policy “to maintain the capacity of the United States to resist any resort to force or other forms of coercion that would jeopardize the security, or the social or economic system, of the people of Taiwan.” The TRA also mandated that the United States would sell Taiwan defense items “in such quantity as may be necessary to enable Taiwan to maintain a sufficient self-defense capability.”

In a subsequent 1982 communiqué, the United States said it intended “gradually to reduce its sale of arms to Taiwan.” The Reagan Administration conveyed to Taiwan “The Six Assurances.” The six assurances were that the United States,

Washington continues to sell arms to Taiwan over strenuous Chinese objections, and both Washington and Beijing continue to plan for the possibility that they could one day find themselves involved in a military confrontation over Taiwan’s fate.

Current Status of the Conflict

China has repeatedly threatened to invade Taiwan if the island declares independence, encouraging Taiwan to keep improving its forces and conducting regular military drills. To simulate a Chinese air attack, Taiwan’s navy launched its premier surface-to-air missile from the deck of a warship very recently, its first test of the weapon in six years, destroying a drone.

Another point of contention comes from the fact that Taiwan wants a larger role in international organizations exclusively held for nations. Since Taiwan is not its own nation, compromises have sometimes been made to include Taiwanese leaders. Taiwan wants a bigger U.N. role–it lost its seat when the body recognized China in 1971. China was opposed to the U.S. idea that Taiwan be invited to the International Civil Aviation Organization Assembly as an observer; and suggested that Taiwan participate as a guest. That was a great example of a compromise, and a move toward peace.

Currently, China is setting up an organization with a similar format to the World Bank, the Asian Infrastructure Investment Bank. Taiwan requested membership, but the Chinese government will only allow membership under a different name–Chinese Taipei. This is another perfect example of the redundancy and tedious diplomatic ties between China and Taiwan.

Society and Culture in Taiwan

One of the major changes affecting the balance between China and Taiwan has been the empowerment of the Taiwanese identity. Previously, Taiwanese people considered themselves both Taiwanese and Chinese, but people are starting to exclusively claim Taiwanese as their ethnicity. This is a problem for China, because that means fewer people are in support of Taiwan’s relationship with the mainland. Although many policymakers propose a joint or unified government between mainland China and Taiwan, this is threatened by the development of the Taiwanese identity.

America’s sale of arms to Taiwan often triggers a cyclical reaction: Washington and Beijing consistently fight back and forth over these sales before business returns to normal. This approach has worked reasonably well for more than 30 years, despite the occasional flare up in the strait, and has created an expectation that it will continue to be followed. However, there are some concerns about the sustainability of this relationship. China is steadily building up its military, and soon the U.S. may have a harder time matching the sophistication of weapons it sells to Taiwan. China’s ability to retaliate against the United States for arms sales to Taiwan is increasing. So, things may change soon, but for now the status quo appears to be holding relatively strong.

Ultimately the United States’ main interest in the Chinese-Taiwanese relationship appears to be peacekeeping, not peacemaking. In the present dynamic, Washington is a stabilizer, emboldening cross-strait interchange, warning both sides that it will counter any unilateral actions that may risk peace, and deterring Beijing by providing its military predominance, while supporting Taiwan’s security forces. In this complicated three-party relationship, none of that seems likely to change anytime soon.

Congressional Research Service: China/Taiwan: Evolution of the “One China” Policy—Key Statements from Washington, Beijing, and Taipei

Council on Foreign Relations: If Taiwan Declares Independence and China Reacts With Force, on Whom Should the U.S. Lean Harder, China or Taiwan?

CSIS: Taiwan’s Quest for Greater Participation in the International Community