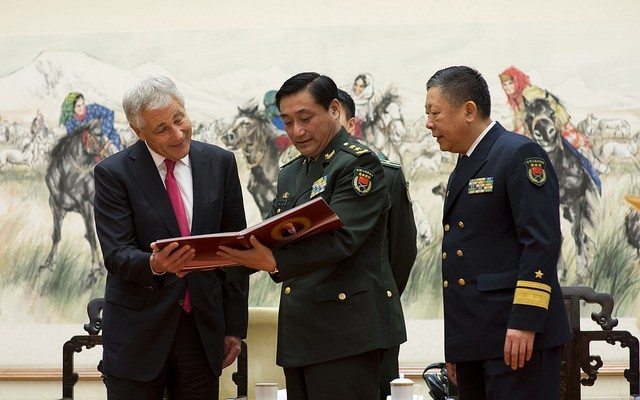 China as a Military Threat: What Does It Mean for the U.S.?

At the recent Zhuhai Air Show, China unveiled a new stealth fighter jet that one day has the potential to rival the United States’ own F-35. This came just days before President Obama was to travel to China to meet with its leaders as part of the larger APEC summit. While the significance of the timing of this display is debatable, it unquestionably shows China is determined to steadily improve and modernize its military arsenal. The question that remains is why? Is China’s path aimed at some future point at which it will surpass the United States as the world’s pre-eminent world power, both economically and militarily? If the answer to this question is yes–or even if it is no–does this then make China a military threat to the United States?

China and the U.S.: Positions in the Global Hierarchy

To begin to answer this question it is necessary to start by looking at these countries’ economies and in particular their economic growth. There are an infinite number of economic measures available to argue which economy in the world is the strongest; however, one of the most traditional and commonly accepted is Gross Domestic Product (GDP). In this regard, America has enjoyed dominance for decades going all the way back to the end of World War II. Today even in a supposedly more multipolar world, the GDP of the US economy, nearly $17 trillion in 2013, dwarfs that of any other nation and almost doubles the second place country, China.

Nonetheless, while the United States enjoys the largest GDP its rate of growth is much smaller than China’s. Since 1978, when it moved from a centrally planned to a market based economy, China’s yearly GDP growth has averaged nearly 10 percent. The United States during this time has experienced annual growth rates of 2 to 3 percent.

This figure excludes many factors, notably the fact that as a larger economy it is harder for the U.S. to grow at a rate equal to that of China. This issue has actually started to affect China as well as its recent growth has slipped to the 7 to 8 percent range as it seeks to curb several glaring social issues. Moreover, while China’s economy is growing faster and one day may pass the U.S. economy based strictly on total GDP, the average GDP per person is much lower in China than the United States. Regardless of the metrics though, why is economic might so important in determining whether China is a military threat to the United States?

That second country on the list is–you guessed it–China again. In 2013 China spent $171.4 billion itself on military expenditures. While the United States again is overwhelmingly outspending China, it is critical to look at the growth rates, not just the overall total. As China’s economy continues to grow, so does its potential military capability.

In 2013, the U.S. actually saw a significant decline in military spending as a result of not only the ending of its wars in Iraq and Afghanistan, but also due to the sequester. In contrast, China actually increased its budget in the same year between 7.4 and 10.7 percent. In 2014, it is reported that China will increase its budget again by an additional 12.2 percent. While this still does not make China equal to the United States, it suggests a desire by China to project its power further beyond its borders. The video below provides a more in-depth explanation.

China and U.S.: Their Relationship

While China’s military capability is increasing this does not automatically make it a threat to the United States, instead it is also important to consider the relationship between the two nations. Historically this could be characterized best as complicated. The video below highlights the complex connection.

The United States has long had a relationship with China, almost from its inception. China was an important market following the Revolutionary War when it was shut out of many other places due to animosity emanating from England. American missionaries also flocked to China and Chinese immigrants came in waves to the United States and were instrumental in constructing the railway network, among other things. Things started going downhill, however, near the end of the nineteenth century during the rise of Imperialism worldwide. In 1882 the U.S. passed the Chinese Exclusion Act, which was aimed at curbing Chinese immigration.

Additionally, in 1899 the U.S. provided men and weapons to help put down the Boxer Rebellion in which Chinese citizens attempted to expel foreigners who they viewed as exploitative of their country. The United States did advocate the Open Door Policy, initiated in the late nineteenth century, that prevented the literal break-up of China; however, the motive for that can be seen as greed as much as humanitarianism in that the U.S. wanted to keep China as an open market to which it had access.

The relationship improved again during the lead up to and for the duration of World War II as the United States provided supplies and men to China in its fight against Imperial Japan. Later during the conflict China also served as a launching point for American attacks against Japan. The bond the countries had hammered out during the war seemed to be set in stone when the United States worked to get China to become one of the five permanent members of the Security Council. Once again however, the relationship frayed with the communist takeover of China and with Chinese soldiers actually engaging U.S. troops during the Korean War. At one point the situation was so bad that nuclear war seemed to be a possibility. Relations stayed frozen until President Nixon famously opened up dialogue between the two countries in the 1970s.

Since Nixon’s thawing the two nations have maintained a strong economic relationship. In 2014, China was the United States’ second most valuable trading partner and the United States was China’s top partner. The two sides also recently agreed for the first time to a major environmental pact that is scheduled to cap China’s emissions in 2030 and cut US emissions by 25 percent by 2025. Still though while the U.S. and China are working in concert, many issues remain between the two nations that could potentially lead to conflict, namely human rights abuses and continued Chinese attempts to steal American technological secrets.

The Price of Friendship

While the complicated relationship between China and the United States may not make China a military threat, the relationship China has with its neighbors in Asia certainly has that potential. Currently China is attempting to exert its newfound power throughout the region. This has led to two separate crises in two separate seas. The one problem in both cases, with Japan in the East China Sea and several Asian countries in the South China Sea, is over control of the seas. Specifically it is over who controls the resources under those seas, particularly the large amount of oil. The video below gives a glimpse of what exactly the issue is.

End of the Pax Americana

Such a loss of credibility may actually already have occurred. Specifically by failing to honor the security commitment to Ukraine and the failure to punish Syria for crossing Obama’s Red line against the use of chemical weapons, hostile countries may now have their doubts concerning American power, or at the very least its commitment.

Not only has this seemingly emboldened countries like Russia, it may also lead other countries with differing political goals such as China to determine the time is ripe for them to assert their own power as well, without the former fear of American retaliation. This may also signal the end of an unofficial era, defined as the Pax Americana or American Peace. During this period dating from the end of World War II, the United States was able to assert its global ambitions due to its military strength.

To Russia With Love

Another potential challenge to the system, crafted by the United States, comes in the form of China’s growing economic relationship with Russia, which has been both a long term and recent nemesis of the United States. While the U.S. and its European allies sanction Russia for its involvement in the unrest in Ukraine, China was agreeing to a $400 billion energy deal that could undermine the sanctions already in place.

Even if China were not emboldened by a perceived American decline, it still has the potential to be a threat to the United States or any other state on this planet because of its nuclear stockpile. While China has long maintained its policy of no First Use concerning nuclear weapons, recent improvements in its arsenal may signal its intent to shrink the nuclear capability gap between the United States and itself.

Fool Me Once Shame on You, Fool Me Twice…

Aside from all the spending and rhetoric, good and bad, many still believe that China cannot be a threat to the United States militarily for one major reason: China and the U.S. are each other’s most important trading partners. But this argument has been made before. In one such case it was argued that Germany and France, which prior to WWI were economically independent, would not go to war. This was proven wrong of course and the two sides soon engaged in one of the bloodiest conflicts in human history.

Thus in time China could very possibly become a military threat to the United States with its quickly growing economy and military budget; however, the amount of dialogue and trade between the two countries could just as easily lead to a peaceful and prosperous relationship well into the future. For now only time will tell.

Heritage Foundation: The Complicated History of US Relations with China

Trading Economics: Countries Spending the Most on the Military

Council on Foreign Relations: Trends in US Military Spending

Guardian: US and China Strike Deal on Carbon Cuts in Push For Global Climate Change Pact

Michael Sliwinski
Michael Sliwinski (@MoneyMike4289) is a 2011 graduate of Ohio University in Athens with a Bachelor’s in History, as well as a 2014 graduate of the University of Georgia with a Master’s in International Policy. In his free time he enjoys writing, reading, and outdoor activites, particularly basketball. Contact Michael at staff@LawStreetMedia.com.
Share:
Related ItemsAsiaChinaEconomic GrowthEconomyHard PowerJapanMilitaryMilitary PowerNixonTradeUnited StatesWWIWWII