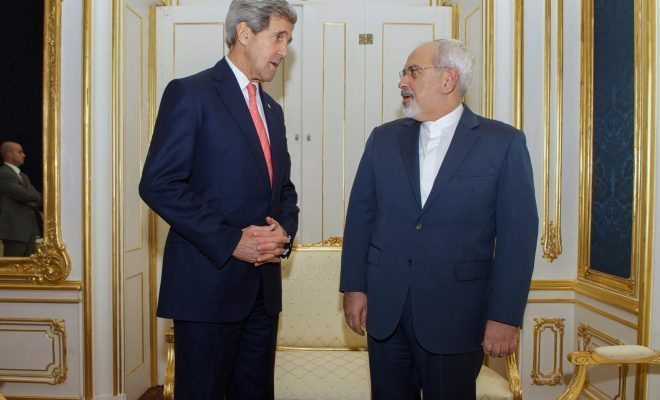 A Castle Made of Sand? The Iranian Nuclear Deal Moves Forward

The United States and Iran, along with a number of other world powers, reached a tentative deal on April 2, 2015, that would prevent the Iranians from developing nuclear weapons. The deal required a tremendous amount of time and work to come together. With all these moving parts it’s not surprising that there have been varied reactions around the world. Regardless, if finalized, the deal will have wide-reaching ramifications both regionally and across the globe. Read on to learn about the current agreement, its impact, and what could happen if it falls through.

So what exactly is this “deal” to which Iran, the U.S., and the other nations agreed?

To begin, Iran will reduce its number of centrifuges and lessen its stockpile of low-enriched uranium. Excesses of both will be handed over to the the International Atomic Energy Agency (IAEA) for safe storage. Iran will also stop enriching uranium at its Fordow facility and will not build any new enrichment facilities. Only one plant, Natanz, will continue to enrich uranium, although in lesser amounts. Additionally, Iran will halt research on uranium enrichment concerning spent fuel rods and will either postpone or reduce research on general uranium enrichment and on advanced types of centrifuges. Iran, by following through with these commitments, will abide by its requirements as a member of the Nuclear Non-Proliferation Treaty (NPT). In addition, Iran will open itself completely to IAEA inspections. The overarching goal is to change the timeline of Iran’s ability to build a nuclear weapon from a few months to at least a year.

On the other side of the deal are the U.S. and the E.U. These parties will begin lifting sanctions on Iran once it has been verified that it is complying with the agreed conditions concerning the nuclear framework agreement. These sanctions include a number of limitations that have hurt the Iranian economy. Specifically, the E.U. sanctions include trade restrictions on uranium-related equipment, asset freezes, a ban on transactions with Iranian financial institutions, and a ban on Iranian energy products. The U.S. has been levying sanctions on Iran since 1979; these include most of those imposed by the E.U. as well as sanctions on basically all types of trade with Iran, other than aid-related equipment.

The sanctions lifted will only be those levied in relation to Iran’s nuclear weapons program; other sanctions that are a result of human rights violations for example, will remain in place. Additionally, if Iran violates the terms of the agreement, the original sanctions can go back into effect. The following video explains in detail what the Iranians agreed to and what the U.S. and other world powers are offering in return.

Roadblocks to the Deal

While a framework is in place and the Obama Administration hailed it as progress, there are still several potential challenges that could derail the agreement before it is finalized in June. Each side appears to have to contend with at least one formidable roadblock to the deal’s success.

In the U.S., Congress still isn’t quite on board. For the U.S. to lift sanctions, President Obama needs Congress to approve the deal; however, due to consistent fighting with Congress, the president has been reluctant to leave it in their hands. Nevertheless, thanks to an agreement on April 14, 2015, Congress will now get to vote on a finalized deal if it is reached by June 30, 2015. While this may appear as yet another defeat for the president and pose a dark outlook for the nuclear agreement, the compromise reached with Congress ensures they will have a say.

Another potential roadblock is Israel. While the country does not have any direct say in whether the deal happens or not, it is not without influence.  As Netanyahu’s recent visit to the U.S. shows, he has Congress’ ear, and could prove an effective lobbyist.

On the Iranian side, dissent has emerged from the arguably most powerful voice in the entire country, Ayatollah Ali Khamenei, the Supreme Leader of the country. In a recent speech he called for sanctions to be lifted immediately upon finalization of the deal, meaning Iran would not have to proove its sincerity first. Khamenei is an unquestioned power in Iran, so this could be a big problem. The video below reiterates the obstacles to finalizing an Iranian nuclear deal.

Impact of the Agreement

The impact of a successful Iran-U.S. deal would be monumental on national, regional, and global levels.

Perhaps no party will reap the benefits of this deal as much as Iran itself. With a deal in place, Iran’s economic struggles as a result of the sanctions will be softened. Iran has the opportunity to improve its economy dramatically. When the sanctions are lifted, Iran can enjoy a $100 billion windfall in oil profits that have been frozen as part of the sanctions. Additionally, Iran can follow through on a number of oil pipeline projects it had in place, but was unable to complete due to the sanctions. Lastly, with U.S. cooperation, Iran will be able to more efficiently develop its large oil and natural gas reserves with American technology.

While Iran stands to gain the most, there will also be changes for the region as a whole. In agreeing to this deal, Iran did not agree to limit its actions in the ongoing conflicts in Lebanon, Syria, and its proxy war in Yemen, which is especially important as it is part of the larger feud between Iran and Saudi Arabia. Saudi Arabia has been in competition with Iran, its ideological and religious counter, for leadership of the Middle East for years. The two have engaged indirectly in a number of conflicts for the hearts and minds of the region. While the nuclear deal likely eliminates a potential nuclear arms race between the conflicting sides, it does nothing to prevent Iran from continuing to vie for control of the region.

Israel shares a similar fear of Iran’s growing influence. Iran is a chief supporter of Hezbollah, a group based in Lebanon that strongly opposes Israel. Additionally, Israel, while not declared, is a well-known nuclear power. These nuclear weapons provide Israel with the ultimate deterrent against larger countries like Iran. Israel therefore fears the Iran nuclear deal because it believes the deal will further empower Iran.

Lastly is the impact of the deal within the global community, beginning with the United States. Many experts expect a huge increase in the world oil supply once the sanctions are lifted. American corporations will benefit not only from cheaper prices, but also from access to developing Iranian energy supplies.

The deal could also help countries such as India, which also benefits from cheap energy as well as increased access to development projects in Iran. China is yet another country that can use another source of cheap oil, but by agreeing to a deal with the U.S., Iran may have taken itself out of the orbit of a sympathetic China. Along a similar vein, Russia, whose economy lives and dies with energy prices, does not need another competitor to bring the price of oil down even further, which is likely to happen.  The video below explains further what the implications of the Iran nuclear deal are.

Thus the Iran deal means something different to all parties at every level of foreign affairs, but the consensus is that it is important to all sides.

On paper the Iran nuclear deal is a win for most parties. The problem is the deal is not on paper yet, as only a framework has been reached. While even getting this far can seem like a monumental step when history is factored in, that same history has the potential to undo everything achieved so far. Whether or not all sides end up getting on board with this deal remains to be seen.

Business Insider: Here’s the Text of the Iran Nuclear Framework

BBC News: Iran Nuclear Crisis: What Are the Sanctions?

Quora: What Could Be an Impact on a Global Level of Iran’s Nuclear Deal?

Atlantic: What Are the Alternatives to Obama’s Nuclear Deal with Iran

Michael Sliwinski
Michael Sliwinski (@MoneyMike4289) is a 2011 graduate of Ohio University in Athens with a Bachelor’s in History, as well as a 2014 graduate of the University of Georgia with a Master’s in International Policy. In his free time he enjoys writing, reading, and outdoor activites, particularly basketball. Contact Michael at staff@LawStreetMedia.com.
Share:
Related ItemsBenjamin NetanyahuEUEuropean UnionIAEAIranIsraelNPTNuclear Non-proliferation TreatyNuclear WeaponsUnited StatesUranium