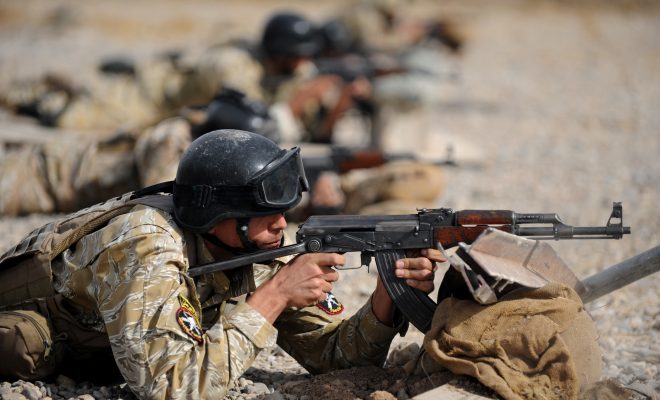 The Battle for Mosul: The Fight for ISIS’s Stronghold in Iraq

On October 17, Iraqi Security forces, with the help of the Kurdish Peshmerga, irregular Iraqi forces, U.S. special forces, and American air power, began their assault on ISIS with the hope of retaking Iraq’s second largest city, Mosul. Not only is Mosul one of the largest and most economically important cities in Iraq, it also serves as a symbol of ISIS’s rise in the country as well as the Iraqi government’s inability to secure its land. The assault promises to be a long campaign, but if successful, could signal the impending end of ISIS in Iraq.

Read on to find out more about the campaign to retake Mosul, its significance in the fight against ISIS, and what it would mean for Iraq to regain the city.

History and Significance of Mosul

The city of Mosul emerged on the former site of Nineveh, an Assyrian fortress. The city’s rise began with it serving as an important link between Syria, Anatolia, and Persia. By the 8th century, it became the major city in Northern Mesopotamia, which is modern-day Iraq. Mosul reached its height in the 12th century under the Zangid Dynasty when it was a hotbed for metal work and miniature paintings. It was subsequently destroyed by Mongolian conquerors in the 13th century.

Mosul was slowly rebuilt and later ruled by the Ottoman Turks from the 16th to the 20th centuries. The British conquered the city during World War I and occupied the surrounding area for several years. It was later incorporated into Iraq. In the Lausanne Treaty negotiations  following the war, Mosul proved to be a contentious issue between the British and Turkish governments. The issue was eventually resolved by the League of Nations, which concluded that the city should be a part of Iraq, but the dispute shaped the way Turkey views the city today.

Prior to ISIS’s rise, Mosul was the capital of Iraq’s Northwestern Province. It had a population of approximately 2 million people before the invasion in 2014. Originally, Mosul was situated on the western bank of the Tigris River, however, it expanded across the river and now occupies parts of the eastern bank as well. In addition to being a regional capital, Mosul is also the commercial center of Northern Iraq. Not only is it home to several major industries and oil production, it also serves as an agricultural marketplace.

Mosul Under Saddam Hussein and the Iraq War

Mosul has also been the site of significant ethnic strife. Traditionally, Mosul was a major center for ethnic Kurds, however, in the 1970s Saddam Hussein’s Baath Party initiated a resettlement plan that moved a large number of Arabs into the area to displace them. Hussein’s plan was successful, eventually leading to a large Arab majority in the city. The new Arab majority responded favorably to Hussein and eventually there were as many as 300,000 Baath Party members in Mosul. Along with displacing the Kurds as a result of his Arabization policy, he also waged a war against them in the late 1980s and early 1990s, which left another 100,000 Kurds dead.

During the initial occupation of Mosul in 2003, U.S. forces managed to establish order in the city. However, when the American force was reduced, ethnic tensions spilled over with Kurds controlling one half of the city and Arabs the other. The strife broke out as Kurds tried to reclaim what they viewed as stolen property. This led to an insurgency of former regime members culminating in the Battle for Mosul in 2004. A coalition of American and Kurdish forces managed to push back the insurgents, at which point the battle lines returned to their status quo on the east and west halves of the city.

This was not the end of the insurgency, however, as the resistance shifted from former Baath members to al-Qaeda in Iraq. In early 2008, following the U.S. surge a year earlier, another round of fighting broke out between American and insurgent forces. The city was once again cleared of insurgents and greater efforts were then put in place to engage the community and avoid another conflict.

Capturing Mosul was key to ISIS’s rise in the region. ISIS derives much of its income from oil revenues and taxes.  Mosul offered both as it is close to key oil fields and has a massive population that could be taxed. Its location was also strategically important in allowing ISIS fighters to freely move about. Lastly, by conquering the ethnically and religiously diverse city, ISIS could claim the superiority of its own ideology.

ISIS’s takeover of Mosul came swiftly, marking a significant embarrassment for the Iraqi government and military. In June of 2014, ISIS fighters headed toward Mosul with the hope of occupying certain parts of the city for a short period of time to make a statement. But instead of just making a statement, ISIS was able to take the entire city and most of the surrounding region. The Iraqi security forces left to guard the city were undermanned and outgunned, yet another result of the government infighting that had plagued the nation. In their retreat, Iraqi forces also left behind weapons and other supplies that only strengthened ISIS’s capabilities.

Life under ISIS has been harsh for the city’s residents. While it was tolerable to some at first, especially those who supported the group, conditions have deteriorated, particularly after coalition bombings increased. ISIS became increasingly unable or unwilling to provide basic services such as electricity, fresh water, sanitation, and adequate food. Additionally, ISIS quickly embarked on a city-wide crackdown, forcing residents to abide by its strict religious and moral codes or receive punishment or even death. The city has slowly morphed into a prison-like atmosphere as the group has refused to let anyone leave.

The video below looks at the importance of Mosul to the Islamic State and why it is important for Iraqi forces to gain control of the city.

The fight to take back Mosul is expected to be especially grueling and difficult. One of the Peshmerga generals predicted it may take up to two months to actually retake the city. That long timeline might surprise outside observers who look at the lopsided number of coalition forces and see a clear advantage–coalition forces have nearly 100,000 troops while estimates suggest there are at most 7,000 ISIS troops in Mosul. The matchup is even more advantageous for coalition forces because they will have significant air support while ISIS does not.

However, the assault on Mosul has not been a secret, although the exact dates have not been clear until recently. This lead up has given ISIS ample time to set up booby traps, lay IEDs, and develop defensive structures like tunnel networks. The group is also employing other familiar deadly weapons such as suicide bombers. Some even believe ISIS has mustard gas, an extremely harmful chemical agent, which it may unleash as a last resort. The group is unlikely to relinquish the position without a fierce fight, as it is symbolic of ISIS’s strength in Iraq. After all, Mosul is where the caliphate was originally declared. Losing Mosul would then be a significant blow for ISIS in Iraq.

The following video looks at the effort to take back Mosul:

Aftermath of the Battle for Mosul

What exactly happens for those involved once Mosul is liberated? The answer starts with the civilians on the ground; the United Nations, the Iraqi government, and the United States have already announced plans for humanitarian aid that will be desperately needed once ISIS has been ousted from the city. This includes basic survival goods that may need to be supplied for up to 12 months.

Building off of that, many of the people who are likely to flee the fighting are Sunnis. One of the major issues within the government, and one that helped sow the seeds for ISIS’s rise, was discrimination against Sunnis by the current and former Iraqi governments. The people in charge will have to figure out how to create a more inclusive country, instead of continuing to seek to redress old wrongs. The other side of that same concern is the role of the Kurds.

The Kurds make up a significant part of the force attempting to retake Mosul, however, there is an agreement in place stopping them from entering the city’s center in order to avoid political tensions. The Kurds’ power has only grown and solidified over the last two years as they have played a pivotal role in the fight to defeat ISIS, while the official Iraqi government has basically just weathered the storm. If ISIS is defeated in Mosul as many anticipate, in the wake of the victory the Kurds may finally feel strong enough to declare an independent state of their own in the north.

Lastly, it is important to look at the battle’s significance for ISIS itself. What would losing its Northern Iraq stronghold mean to the group? It will likely mean the end of the ISIS-proclaimed caliphate in Iraq and Syria, where ISIS is also losing territory. However, it does not mean the end of the group and certainly not the end of ISIS-style extremism. ISIS still has bases in other countries with weak governments and where Sunni minorities are ostracized, such as Libya and Yemen. As long as those conditions exist, ISIS is likely to thrive. And even if it is not ISIS, another group will likely emerge to replace it, much like how Al Qaeda in Iraq led to ISIS in the first place. The main issue then is the social, economic, and political exclusion of certain groups. These conditions have often been exaggerated by Iran and Saudi Arabia’s battle for the Middle East, which must be addressed to prevent the influence of terrorist groups in the region.

Even if the battle for Mosul is a success, will it be viewed as a success for everyone? The Kurds certainly look to gain with the elimination of their main rival in the North. The fall of ISIS in Mosul, combined with other gains that the Kurds have made since ISIS emerged, has them in a position to potentially seek a state of their own.

However, an independent Kurdish state may not be particularly appealing to the Sunni Arabs in Mosul, who have long battled Kurds for control of the city and have felt marginalized by the Shia-dominated government in Baghda. Speaking of the Iraqi government, will Iraqi citizens trust a fractious government to protect them going forward when it just let them fall under the control of an extremist group?

Will this also be the end of extremist groups in the region or will simmering Sunni discontent lay the groundwork for another group or some form of ISIS resurgence? Only time can answer these questions, but even if the battle for Mosul is successful, it may not be the last one in the near future.

Institute for the Study of War: The Fight for Mosul

The Guardian: Life Under ISIS in Raqqa and Mosul: ‘We’re Living in a Giant Prison’

Reuters: As Mosul Fight Approaches, Worries About the Day After

Newsweek: The Battle Against ISIS in Mosul Could Lead to an Independent Iraqi Kurdistan

Rudaw: The importance of Mosul for ISIS

Michael Sliwinski
Michael Sliwinski (@MoneyMike4289) is a 2011 graduate of Ohio University in Athens with a Bachelor’s in History, as well as a 2014 graduate of the University of Georgia with a Master’s in International Policy. In his free time he enjoys writing, reading, and outdoor activites, particularly basketball. Contact Michael at staff@LawStreetMedia.com.
Share:
Related ItemsIraqISISIslamic StateKurdsMosulTurkey