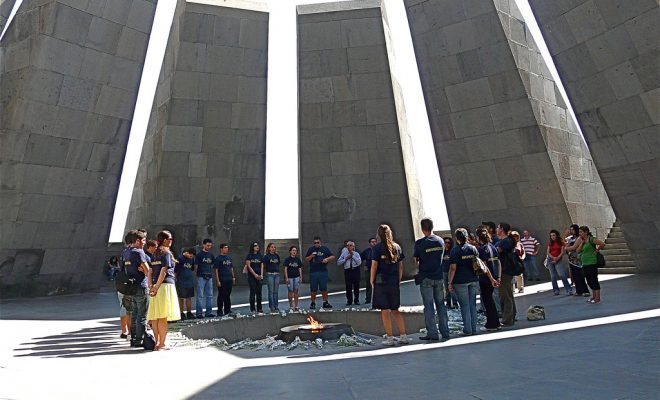 The Armenian Genocide: A Battle For Recognition

This week marks the one hundredth anniversary of the Armenian genocide, which took place in the Ottoman Empire beginning in April 1915. A lot has changed in 100 years–the Ottoman Empire obviously no longer exists, having been replaced by modern-day Turkey. The Armenians also now have a country of their own, bordering Turkey to the East. Yet the atrocities committed against the Armenians have remained a contentious point of debate, as Turkey refuses to recognize the genocide or even mention that it happened. Turkey has also pressured its allies to ignore the events, as well. Read on to learn about the Armenian genocide, Turkey’s position on the events, and the recognition, or lack thereof, by other countries.

History of the Armenian Genocide

In the 1948 Convention on the Prevention and Punishment of Genocide, Articles II and III, genocide is defined as “intent to destroy, in whole or in part, a national, ethnical, racial or religious group, as such.” However, there’s been significant debate over whether or not what happened to the Armenians constitutes a genocide. On the global stage, opinions vary widely. For example, Pope Francis recently declared it the century’s first genocide, while Secretary General Ban Ki-Moon of the United Nations has stopped short of doing the same. For the purposes of this article, it will be referred to as the Armenian genocide, although with recognition that such a classification is disputed.

The Armenians lived in the region of modern-day Turkey for thousands of years. While they briefly had their own kingdom, they were usually a part of a larger empire, including the Ottoman Empire from the 1500s until its collapse following WWI. The Armenians were treated as second-class citizens in the empire due to their Christian religious beliefs, as the Ottomans were Muslim.

While the Armenian genocide was the worst and most well-publicized massacre of the Armenian people, it was not the only one. Over the course of the late 1800s, there had been another massacre at the hands of the Ottoman Turks as well. In that case, hundreds of thousands of people had been killed, a large number given the small overall population. There were also other intermittent acts of butchery levied against the Armenian population by the Turks throughout the years.

The Armenian genocide began in April 1915, during WWI. It lasted into the 1920s and overall as many as 1.5 million Armenians were forcibly deported or killed. Along with the gruesome murders, children were also kidnapped from their families and sent to live with Ottoman parents and women were raped and forced to become part of harems for Ottoman rulers.

These attacks were prompted by a few different facets of the Ottoman-Armenian relationship. Since the late 1800s Armenians had protested Ottoman rule, demanding more rights and greater autonomy. During WWI it was widely believed that the Armenians would support the Russians in hopes of achieving independence. This concern was validated, as Armenians organized volunteer battalions to fight alongside the Russians against the Ottomans.

A mass killing of Armenians happened; there’s almost no disagreement about that. But even today, it is still illegal to say that in Turkey. In fact, if someone is caught talking about the event or writing about it, they risk being arrested. But why have so many other nations been so slow today to acknowledge the events that happened almost a century ago?

The Turks have many ways to explain the mass deaths of the Armenian population during WWI, mostly attributing it to the grim realities of war. Why has Turkey persisted so long in presenting that description of events? The answer appears to be two-fold.

First, Turkey has denied the genocide so long now that it has almost become part of the national consciousness. In fact, the idea of an Armenian genocide almost seems bewildering to the Turkish people. In a recent statement with regard to an EU parliamentary vote on whether or not to recognize the actions of the Ottoman Empire as genocide, Turkish President Recep Tayyip Erdogan weighed in. Erdogan seemed perplexed at the EU even raising the issue. According to him,

I don’t know right now what sort of decision they will make … but I barely understand why we, as the nation, as well as print and visual media, stand in defense. I personally don’t bother about a defense because we don’t carry a stain or a shadow like genocide.

Turkey also faces potential costs in admitting guilt. Experts suggest that if Turkey were to admit to committing genocide, it may have to compensate victims or their families. This was the case in the aftermath of the Holocaust, which was recognized. With these factors in place it becomes clearer why Turkey would be hesitant to admit guilt, especially when the admission would gain the Turks nothing, except perhaps some good will in the international community. The accompanying video reiterates why Turkey is refusing to acknowledge the genocide.

Denying the genocide has also been a political strategy for some in Turkey. President Erdogan is a huge road block for acknowledging the genocide. He has made comments denying the genocide that have helped him to gain popularity. Given that he has faced increased criticism for his governing style and changes he has attempted to make to Turkey’s government to keep himself in power, any political points he can score probably look pretty appealing.

Within Turkey, some groups have recognized the genocide. Kurds, who make up about 20 percent of the country’s population, have recognized the events to a large extent. While Kurds commemorated the anniversary and use the word genocide in describing the events, they have been accused of falling somewhat short. Namely, despite Kurdish units carrying out some of the Armenian murders, Kurdish citizens, like the Turks, are hesitant to accept any responsibility. In this case, they feel justified in their denial because it was not their nation conducting the massacres, but rather the Ottoman Empire. Nevertheless many Kurds feel a responsibility to reconcile with the Armenians because they are also an oppressed people.

The U.S. and Other Allies

While Turkey’s motives seem relatively clear in denying the Armenian genocide, the motives of its allies are less so. Already many countries recognize the genocide including Canada, France, Germany, and Russia.  Other countries such as the U.K. and Israel do not.

The United States also hasn’t, as a whole, recognized the genocide. While 40 states, the House of Representatives, and several presidents have confirmed Turkish actions against the Armenians to be genocide, the nation has not. The reason for American refusal, like that of Turkey itself, mostly lies in self-interest.

When other countries, such as France and Austria, have recognized the genocide, Turkey has withdrawn its ambassador or ended military alliances with them. While France and Austria can get by fine without Turkish military assistance, it is a little more difficult for the U.S., which uses Turkey as a critical strategic point for interactions with nations in the Middle East.

Additionally, there has been a significant lobby on Turkey’s behalf within the U.S. government to not recognize the genocide. By preventing the U.S. from recognizing Turkey’s culpability it reduces the pressure the country is under internationally. The video below shows then-Senator Barack Obama addressing the Armenian genocide seven years ago, an issue he promised to address but still has not.

The man who came up with the word genocide, Raphael Lampkin, penned the term to describe the Nazis’ atrocities against the Jews.However, he had also been influenced by the Turkish actions against the Armenians during WWI and the Armenians’ subsequent efforts to track down and murder the leaders responsible. To him there was no difference between the two scenarios–in each case an entire people and way of life were targeted for extermination; however, Turkey and its allies, including the United States, have consistently failed to see the similarities. As long as the current barriers to recognition remain in place, that will probably continue to be the norm.

Blaze: The 1915 Armenian Genocide-Why it is Still Being Denied by Turkey (and the US?)

Michael Sliwinski
Michael Sliwinski (@MoneyMike4289) is a 2011 graduate of Ohio University in Athens with a Bachelor’s in History, as well as a 2014 graduate of the University of Georgia with a Master’s in International Policy. In his free time he enjoys writing, reading, and outdoor activites, particularly basketball. Contact Michael at staff@LawStreetMedia.com.
Share:
Related ItemsArmeniaArmenian GenocideArmenian MassacreOttoman EmpirePope FrancisTurkeyUnited Nations Ban Ki-MoonUnited StatesYoung Turks