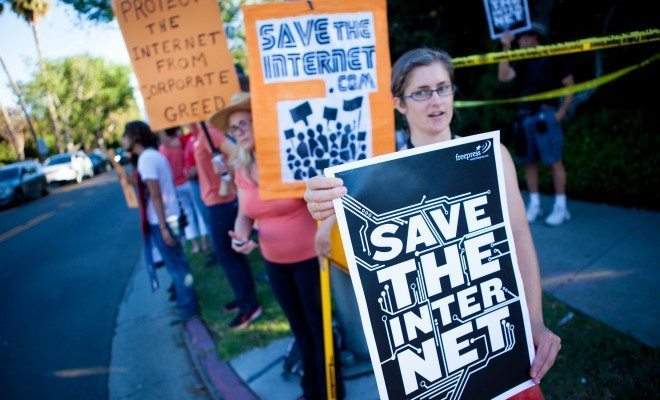 Internet Fast Lanes Will Change How You Use the Web

The FCC is on the verge of allowing internet fast lanes that would allow content providers to pay for faster access for their customers. Read on to learn why this proposal has generated so much controversy.

What is an internet  fast lane?

When commentators say “fast lane,” they are usually referring to paid prioritization. This is when an Internet Service Provider (ISP), such as Comcast or Time Warner, charges a content provider, such as Google or Facebook, an extra fee for faster “lanes” of bandwidth. Effectively, the ISPs would be allowing content providers to pay for easier access to customers.

Netflix recently agreed to pay Comcast for faster access to its customers. This is the first deal of its kind.

Netflix is not happy about the deal at all. In a blog post, CEO Reed Hastings referred to the fee as an “arbitrary tax” and expressed concerns that escalating fees could continue to be charged to Netflix and other content providers. Netflix may have agreed to pay this fee not to gain an advantage but to gain download speeds they once had. This graphic from the Washington Post shows that Netflix’s download speeds on Comcast tanked during the negotiations and then suddenly spiked once Netflix agreed to pay the fee:

Why are ISPs allowed to create fast lanes?

ISPs like Comcast are allowed to charge content providers for faster access because of a recent court decision that struck down the Federal Communications Commission’s (FCC) rules regarding net neutrality. The FCC is the federal agency in charge of regulating communications over mediums such as radio and television.

Net neutrality is the concept that all data on the Internet should be treated equally. You should be able to load a Netflix page just as fast as you can load a YouTube page. This video from Mashable provides a clear visualization of the concept.

The FCC created regulatory rules in 2010 that would enforce net neutrality. Cable companies and other ISPs immediately cried foul and filed lawsuits.

On January 14, 2014, a U.S. appeals court overruled the new rules. The reason? Broadband Internet is classified by the government as an information service. The FCC does not have the authority to regulate information services. The Internet used to be classified as a telecommunications service until a 2005 Supreme Court ruling. The FCC is allowed to strictly regulate telecommunications services.

What is the FCC doing about fast lanes?

In the wake of the court ruling, the FCC is in the process of writing a new set of Internet rules that allow for fast lanes. For the past few months, the FCC has allowed public comment on its website on one main question: should the new rules allow fast lanes?

There is a possibility that these rules would permit only some heavily regulated fast lanes to exist. The FCC says that the rules would require these lanes be “commercially reasonable,” but that’s a vague requirement that could be exploited.

There’s also a possibility that the FCC could go in the opposite direction and ban prioritization. The FCC would do this by reclassifying broadband Internet as a telecommunications service, giving it the power to strictly regulate ISPs. This reclassification would almost certainly face a legal challenge by ISPs, as well as a challenge from Congress.

How have people reacted to this proposal?

The FCC received more than one million online comments about the proposed rule change in the span of five months. That is the most comments the agency has ever received, and almost topped the number of complaints the Commission received after Janet Jackson’s “wardrobe malfunction” at the Super Bowl.

Activists and content providers alike are not happy that the FCC is even considering legalizing fast lanes.

The Internet Association, an industry group that represents companies like Amazon, Google, and Uber, submitted a lengthy comment to the FCC’s website arguing, in part, that “charging for enhanced or prioritized access […] undermines the Internet’s level playing field.”

The association also expressed concern that ISPs might provide prioritization to their own content. For example, Comcast owns NBC Universal. A fast lane rule would allow Comcast to prioritize access to NBC television streaming over the quality of other network streaming services.

John Oliver, host of HBO’s Last Week Tonight With John Oliver, took a more cynical view in this widely shared segment. Oliver accused the FCC and Chairman Tom Wheeler, who used to be a lobbyist for cable companies, of corruption. He also called on Internet trolls to flood the FCC with comments.

MoveOn, the liberal activism website, released this television ad encouraging viewers to call the FCC in support of network neutrality.

ISPs, for the most part, are issuing vague statements about how they support an “open Internet.” For example, Comcast released a statement saying that “we support the FCC putting in place legally enforceable rules to ensure that there is a free and open Internet, including transparency, no blocking, and anti-discrimination rules.” This doesn’t really say anything specific. Comcast argued later in the statement against a reclassification of broadband Internet, but never argued why they should be allowed to charge for fast lanes.

In stunning contrast, AT&T provided a robust defense of fast lanes in its FCC comment. The whole document is definitely worth a read, but here’s the most important quote:

“In no other area of the economy does the government ban voluntary market transactions (here, for example, quality-of-service enhancements) specifically in order to prevent those with superior resources from offering better services to their own customers.”

The line AT&T concluded the paragraph with is equally important to understanding the company’s argument:

“In short, the theoretical basis of this rationale for a strict nondiscrimination rule is thoroughly unsound and anathema to a market economy.”

AT&T’s argument is pretty unique. It is essentially saying that not allowing content providers to pay for a fast lane or not allowing ISPs to offer such an “upgrade” goes against the very foundation of a capitalist economy.

What’s important about this argument is the claim by AT&T that the fast lane would only amount to an “enhancement” in service for some companies and not a downgrade in service for companies that do not pay the fee.

Soon, the FCC will create a new set of rules governing the Internet. It will either allow fast lanes to exist and face harsh public criticism or it will fight for net neutrality and face a barrage of lawsuits and challenges from ISPs and Congress. This is an issue you will want to keep an eye on if you use the Internet regularly.

FCC: FCC Launches Rulemaking On How To Protect The Open Internet

Guardian: Welcome to the Age of Digital Discrimination

NextGov: The FCC is Getting Serious

Eric Essagof
Eric Essagof attended The George Washington University majoring in Political Science. He writes about how decisions made in DC impact the rest of the country. He is a Twitter addict, hip-hop fan, and intramural sports referee in his spare time. Contact Eric at staff@LawStreetMedia.com.
Share:
Related ItemsAT&TCapitalismComcastCongressConsumersFCCInternet Service ProviderISPNBCNet NeutralityNetflixOpen InternetReed HastingsTom WheelerWheeler