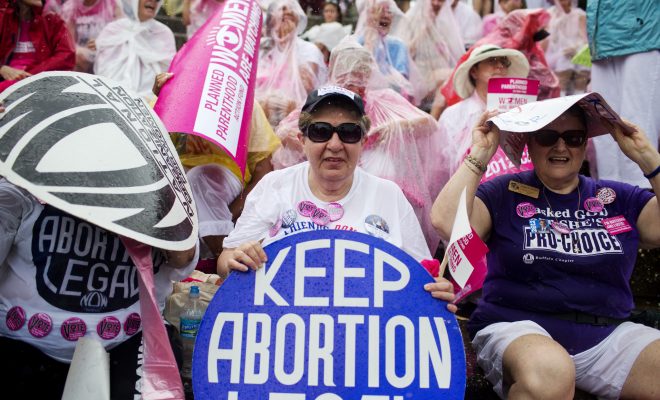 What is the Hyde Amendment?

People who disagree with defunding Planned Parenthood have a consistent response to that proposal–that federal money cannot be used for abortion services because of something called “the Hyde Amendment.” Read on to learn what the Hyde Amendment is, its history, and what exactly it requires.

The History of the Hyde Amendment

In 1973, the Supreme Court ruled on Roe v. Wade. With a 7-2 decision, the court ruled that a woman’s right to an abortion is protected by the Fourteenth Amendment. That decision legalized abortion in the United States, although states still have control over certain aspects–like at what point in a woman’s pregnancy abortion can be restricted.

The 1973 Supreme Court ruling in Roe v. Wade that legalized abortion in the United States set up the debate between pro-choice and pro-life advocates that is still being waged today. Between 1973 and 1976 various attempts to prevent Medicaid funding from being used for abortions were introduced and failed. But in 1976, the Hyde Amendment was introduced by Congressman Henry Hyde. It was not any sort of standalone law, but rather a rider attached to the 1977 fiscal year’s Labor, Health and Humans Services Appropriations Bill.

There was a lot of back-and-forth and disagreements between the House and the Senate, and the measure went through a number of revisions before it was successful. Language that made exceptions for abortions in the case that the mother could die without the procedure was inserted, removed, and inserted again.

But eventually the provision known as the “Hyde Amendment” was passed in 1977. In essence, it prohibited any use of Medicaid funds for abortion, unless the life of the mother was endangered. The passage of the Hyde Amendment was seen as a big win for the growing pro-life movement, but because it’s a rider attached to an appropriations bill, it needs to be re-passed every year.

After the Hyde Amendment was passed, its legality was almost immediately challenged. The Reproductive Freedom Project, the Center for Constitutional Rights, and Planned Parenthood, representing health care providers and a pregnant Medicaid patient, obtained an injunction 40 minutes after the provision went into effect. Federal Judge John F. Dooling Jr. granted the injunction, setting off a legal battle that made its way to the Supreme Court. SCOTUS sent the case back to Dooling, who kept the injunction in place for that year.

While the Hyde Amendment worked its way through the legal system, it also underwent revisions in Congress. Because it needs to be passed again through an appropriations bill each year, there’s plenty of room to edit and refine the language. Eventually, language that allowed for exceptions in the case of rape or incest were added.

The Court held that states participating in the Medicaid program were not obligated to fund medically necessary abortions under Title XIX. The Court found that a woman’s freedom of choice did not carry with it ‘a constitutional entitlement to the financial resources to avail herself of the full range of protected choices.’ The Court ruled that because the Equal Protection Clause was not a source of substantive rights and because poverty did not qualify as a ‘suspect classification,’ the Hyde Amendment did not violate the Fifth Amendment. Finally, the Court held that the coincidence of the funding restrictions of the statute with tenets of the Roman Catholic Church did not constitute an establishment of religion.

Although the text has evolved slightly over time, it’s similar to the original concept–federal funds through Medicaid should not be used for abortion services. The current text allows exceptions for if a mother’s life is at risk, or if a woman has become pregnant through rape or incest. Despite political majorities changing over time, and other legal cases brought against the provision, some version of the Hyde Amendment has passed every year since 1977.

Recently, the Hyde Amendment has made it back into the news again, in the sense that there are moves being made to render it permanent. H.R. 7, also known as the “No Taxpayer Funding for Abortion and Abortion Insurance Full Disclosure Act” would codify the already-existing provisions in the Hyde Amendment and make the restrictions on federal funding permanent. It would also prevent women who are on military insurance or work for the federal government from using their insurance for abortion services.

The House of Representatives passed H.R. 7 on January 24, 2017 with a 238-183 vote. It’s unlikely to pass the Senate (similar bills passed the House in recent years and were not passed by the Senate) but if it does, it seems likely that President Donald Trump would choose to sign it.

Arguments for and Against the Hyde Amendment

There are plenty of arguments for and against the Hyde Amendment, many of which are tied to the general debate over abortion. The following lists are by no means conclusive. But like abortion, the Hyde Amendment remains incredibly controversial.

Arguments for the Hyde Amendment

Another argument in favor of the Hyde Amendment is that it is supported by the American public. Polling on the issue has varied widely–in fact, both supporters and detractors of the Hyde Amendment regularly make this argument–but it’s true that certain polls have indicated Americans are not in favor of using Medicaid funds for abortions. A Politico poll conducted in October 2016 found that 58 percent of voters are not in support of using Medicaid funding for abortion.

Even some pro-choice individuals are in favor of the Hyde Amendment, arguing that regardless of their personal or political beliefs on abortion, taxpayer money should not be involved. For example during the 2016 election, Senator Tim Kaine, in contrast to his running mate Hillary Clinton, was supportive of the Hyde Amendment. Kaine “stood with” Clinton’s efforts to repeal it, but said he was personally in support of the measure.

Arguments Against the Hyde Amendment

Critics of the Hyde Amendment point out that it is specifically intended to target poor women and women of color who rely on Medicaid. Hyde’s own statements when he introduced the measure provide some fodder for that point of view. He stated: “I certainly would like to prevent, if I could legally, anybody having an abortion, a rich woman, a middle-class woman or a poor woman. Unfortunately, the only vehicle available is the (Medicaid) bill.” Advocates of repealing the Hyde Amendment point out that an abortion is expensive to pay for out-of-pocket, so many women who rely on Medicaid don’t have that option.

Those who support repealing the Hyde Amendment also point out that restricting access to abortion doesn’t necessarily lead to less abortions, but it leads to more unsafe abortions. They also point out that women who want an abortion but aren’t able to obtain one are more likely to fall into poverty than a woman who is able to. And given that many women who seek abortions already have at least one other child, that can be dire for entire families. Of course, traditional pro-choice arguments come into play when discussing the Hyde Amendment–including that women’s healthcare shouldn’t be a political decision.

Given that the Hyde Amendment comes up almost every time there’s discussion about “defunding” Planned Parenthood, it’s important to understand exactly what it does. The Hyde Amendment, like the abortion debate as a whole, is complicated, convoluted, and confusing. First introduced shortly after the landmark decision in Roe v. Wade, the language has evolved over time, but one thing has been consistent–it prohibits federal funding from being used for abortions. Given public opinion, as well as the Hyde Amendment’s longevity thus far, it seems likely that it will remain in place for the next few years.

Anneliese Mahoney
Anneliese Mahoney is Managing Editor at Law Street and a Connecticut transplant to Washington D.C. She has a Bachelor’s degree in International Affairs from the George Washington University, and a passion for law, politics, and social issues. Contact Anneliese at amahoney@LawStreetMedia.com.
Share:
Related ItemsAbortionH.R.7Hyde AmendmentMedicaidPlanned ParenthoodPro-ChoicePro-Life