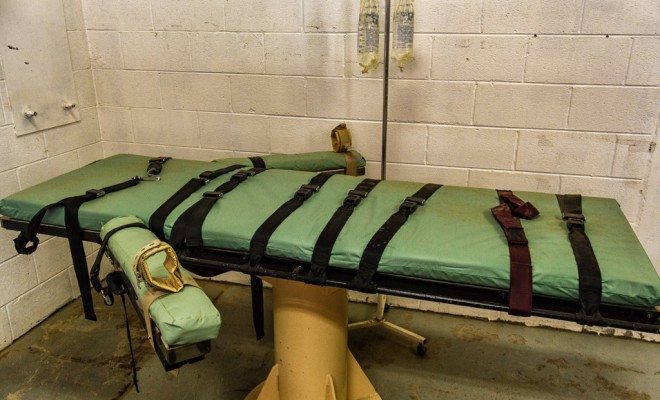 Lethal Injection Crisis in America: How States Are Solving the Problem

How does lethal injection work?

This video from NextMedia Animation gives a quick overview of how the process works. Do not worry, it is safe for the squeamish:

There are three drugs at play in a traditional lethal injection scenario. The first is Sodium Thiopental, a barbiturate which acts as an anesthetic to make the prisoner unconscious. Second is pancuronium, a muscle relaxant that paralysis the prisoner, which stops his or her lungs from working. The paralyzing effect of this drug is also used so that the viewing audience of the execution does not have to see some of the body movements that might take place during the execution. Finally, potassium chloride is injected into the prisoner. This drug stops the heart from beating. If all goes right, the process should be over in eight and a half minutes, and the prisoner should be too unconscious to feel any pain.

What problems has lethal injection run into recently?

States are having trouble accessing the three drugs necessary to complete a lethal injection. While there is no shortage of the drug, pharmacies and drug manufacturers have stopped selling the drugs to states for the use of lethal injection. Unsurprisingly, companies do not like their products being linked to death. Drug companies want people to connect their brand with saving lives, not ending them. European nations, where most of the pharmacies that make these drugs are located, have banned the export of these drugs as part of an effort to ban capital punishment worldwide.

European nations no longer use the death penalty, and most likely will not return to it in the near future. Watch this British discussion about the death penalty to see how they feel about not having capital punishment. Notice that only one panelist wants to bring the death penalty back, and that the rest of the panel, made up of British politicians and public figures, speaks loudly against her:

Should we continue using lethal injection?

It is possible for states to continue using lethal injections, with a few changes. For one, they have to get new drugs from a compound pharmacy. These are pharmacies that, instead of mass-producing drugs, make drugs specifically for one patient. They are expensive, but they are also the only option for states that still want to still use lethal injection.

However, even these small pharmacies do not want to be publicly associated with the death penalty. To sidestep this problem, states have just decided to keep the source of the drugs secret. This has outraged critics of the death penalty, who say that death row inmates deserve to know how they will be killed. A few convicted felons have even sued to try and stay their executions by arguing that this secrecy constitutes cruel and unusual punishment. Their claim is that, since these drugs have potentially never been tested before, there is no guarantee that their death will be painless.

According to Professor Robert Johnson, an expert on prisons and the death penalty at American University’s Department of Justice, Law, and Criminology, the new drugs and the pharmacies supplying them might be the cause of even more failed executions.

“The compounding pharmacies are not closely regulated by the FDA,” Johnson said, and continued with, “there are concerns that the drugs they produce might vary in strength. Some of the more recent executions involving these compounding drugs have had more complications.”

Apparently, more people being killed by these compounding drugs are seen gasping for air as a result of the paralyzation of their lungs. They are not supposed to be awake for this.

“It’s likely that if the execution goes wrong that the person will asphyxiate which, without anesthesia, will be very painful,” Johnson said.  “A certain number of these cases are quite likely intensely painful but the person cannot show it because they are paralyzed.”

What’s worse is that the people administering these drugs are not doctors. The American Medical Association (AMA) highly discourages doctors from participating in lethal injections, so the people executing these prisoners are often not medically trained, which makes errors much more likely.

The results of a botched lethal injection are not pretty. Let’s take, for example, the case of Clayton D. Lockett’s execution in Oklahoma on April 28, 2014. After the first injection, which is meant to protect the prisoner from feeling any pain, the executioners started injecting the next two drugs. It was at this point that Lockett woke up.

The second and third drugs in lethal injection are incredibly painful without an anesthetic. Imagine your entire body going into paralysis and your heartbeat stopping while you are still awake. This is what Lockett experienced. He tried to sit up and then actually spoke. It took nearly 45 minutes for Lockett to eventually die of a heart attack.

Lockett did not receive the drugs commonly used in a lethal injection. The execution still used potassium chloride to stop the heart, but the sedative and muscle relaxant were replaced with midazolam and vecuronium bromide from a compound pharmacy. Oklahoma refused to disclose why these drugs had been chosen and where they had bought them. The Supreme Court of Oklahoma ordered a stay of his execution, but quickly removed the stay after a state legislator threatened the justices with impeachment.

There is definitely a case to be made that lethal injection is the most humane way for the state to kill someone when done correctly– the operative words. That is why the overwhelming majority of executions today are done this way. However, there are too many disturbing stories about botched injections to argue that it is always humane, and the access issue has made these stories too common.

Watch Dr. Joel Zivot, and anesthesiologist, explain why he does not think that lethal injection is humane on Dr. Sanjay Gupta’s CNN show, “SG|MD”:

Are there options besides lethal injection?

Since Lockett’s execution was botched so badly, other states might be wary to continue using lethal injection, even though multiple state Supreme Courts have ruled that keeping the drugs secret is constitutional. That might be why some states are reverting to older forms of execution.

This clip from Aileen: Life and Death of a Serial Killer explains how the electric chair works.

Death penalty opponents and death row inmates are expected to challenge this new law in courts. The Supreme Court upheld the electric chair in 1890, but it is possible that they might find it cruel and unusual in a modern setting. To make your own judgement, read this article on Vice.com explaining how the electric chair kills someone.

As you can see, it is not nearly as pleasant as lethal injection. The chair basically cooks whoever is sitting in it. And that is when it goes right. In Florida on July 8, 1999, Allen Davis screamed and bled profusely from his nose during his execution.The chair killed him but he ended up covered in blood and burns. His case led Florida to abandon the electric chair as a method of execution. There are pictures of his body after the execution, but they are VERY graphic.

It is hard to argue that this is the most humane way of killing someone, but that does not mean that states are not allowed to use it as a primary execution form. Because the Supreme Court ruled that the electric chair is not cruel and unusual punishment, states can continue to use it. That is, until somebody challenges them in court. Since the case deeming the chair constitutional was so long ago, there is a chance that the Supreme Court might overturn the ruling. It is not an unrealistic scenario. Nebraska’s Supreme Court ruled that the electric chair was cruel and unusual punishment in 2008.

A number of states, including Oklahoma, have contemplated returning to the firing squad as their primary form of execution. Oklahoma is currently the only state that allows for death by firing squad, and only as a secondary option.

This news report about the execution of Ronnie Lee Gardner in 2010 by firing squad provides an animation that shows how a firing squad works:

As old-fashioned as it sounds, the firing squad actually has some benefits. For example, it is the only form of execution that preserves most of the body’s organs so that they can be donated. Also, when the marksmen are good, it is a quick form of death.

However, a firing squad is expensive. For example, it costed 165,000 to execute Gardner. The majority of this money went to the salaries of the marksmen, but some also went toward the guns and ammunition used, the chair Gardner sat in, and the sedative given to Gardner before the execution began. The cost would probably go down slightly if Utah ever had to do this again, because they now have all of the equipment, but it would still be expensive. It is certainly a far cry from the $1,286.86 spent by Texas to kill Keith Thurmond with a lethal injection in 2012.

Of course, the biggest problem with both the firing squad and the electric chair is that they are violent forms of execution that the American people are potentially not ready to stomach.

“With lethal injection, you could lull yourself into a sense of security that this was a painless procedure,” Johnson said, and continued with, “you could live with that.”

It costs that much to kill someone?

Yes, executions are expensive. It is even more expensive to keep someone on death row. This is because capital punishment cases take significantly longer to resolve and result in more appeals than a life-without-parole case.

“Because someone’s life is at stake, the cases are more contested and likely to have more experts involved,” Johnson said.

Many states also keep death row inmates in expensive high-security confinement. According to a report from the National Bureau of Economic Research, America spent $1.6 billion on capital punishment from the years of 1982-1997.

Should the death penalty be abolished altogether?

That is a complex question, and there is not enough space in this article to answer it. To get an idea of the moral arguments for and against the death penalty, watch this debate between The Nation and National Review Magazine:

In the absence of a new drug discovery, states will either have to prepare for more botched lethal injections or switch to a more violent form of execution. Support for the death penalty has consistently declined in the past two decades, and incidents like the Lockett death might be too much for those that still approve of it.

Hospira: Position on Use of Our Products in Lethal Injections

Death Penalty Information Center: Everything You Need to Know About Compounding Pharmacies

The New York Times: Outrage Across Ideological Spectrum in Europe Over Botched Execution

Eric Essagof
Eric Essagof attended The George Washington University majoring in Political Science. He writes about how decisions made in DC impact the rest of the country. He is a Twitter addict, hip-hop fan, and intramural sports referee in his spare time. Contact Eric at staff@LawStreetMedia.com.
Share:
Related ItemsBotchedCapital PunishmentClayton LockettDeath PenaltyElectric ChairLethal InjectionOklahomaPrison TrendsTexas