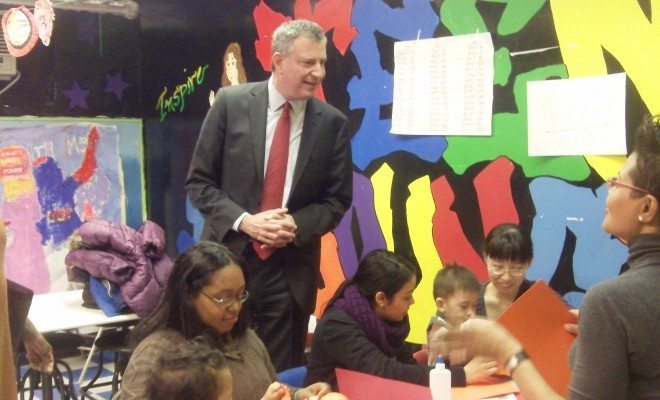 Charter schools have made news in recent years among American pedagogues, offering quality education for students who often live in inner city areas where a quality education is hard to come by. While repeated attempts have been made to reform America’s public school system, educational progressives have hailed charter schools as the solution to the problem of overcrowded, under-achieving public schools in urban areas; however, some see the special privileges that have been endowed on these schools recently, such as free real estate inside public school buildings, as too much of a distraction from the job of truly improving public schools. One such debate took place in New York City, when Mayor Bill De Blasio chose not to let charter schools move into public school space. Read on to learn about the controversy.

In New York City, former Mayor Bloomberg had accepted applications by charter schools to co-habit public school buildings rent free, allowing charter schools to open up in areas where rent and real estate are expensive. However, Mayor Bill De Blasio has been vocal about his opposition to providing special privileges to charter schools. De Blasio made comments about prolific New York charter school founder Eva Moskowitz during his election campaign, saying “There’s no way in hell Eva Moskowitz should get free rent, OK?” and “These changes appear to be part of a sustained pattern to privilege Eva Moskowitz’s Success Academy schools with space and resources at the expense of the traditional public schools with which they share buildings.”

True to his word, on February 27, 2014 De Blasio withdrew three agreements to allow charter schools to share space with public schools in public education buildings. These three withdrawals were the only ones among 17 total charter school applications, leaving 14 charter schools that were permitted to continue with plans to share public education space. While the Mayor’s administration used a strict set of four criteria to withdraw those schools, the three he did revoke were all from the Success Academy chain headed by Moskowitz, leading many opponents to argue that this was an act of a personal vendetta.

What’s the argument in favor of De Blasio’s actions?

De Blasio’s supporters see this issue as a political ploy by Moskowitz to maintain her company’s economic growth in New York City, and maintain that De Blasio used unbiased criteria in his selection of schools to withdraw from co-location agreements. Out of 45 total applications, De Blasio approved 36–an overwhelming majority–and of the 17 charter school applicants, 14 were approved. The De Blasio administration used the following four criteria as the basis for this decision:

Many find these perfectly reasonable criteria, and 36 of the 45 applying schools met these requirements. De Blasio claims that these approvals were rushed by the previous administration, and that they simply did not pass his own set of criteria. Some Moskowitz opponents also argue that the reason behind Success Academy’s triumphs in New York City is due to the Academy’s ability as a private school to dismiss or force out any unsatisfactory students, including students with special needs. This allows them to retain only the upper-tier students to generate excellent test scores and apparent success. These charter schools also often cater to the city’s political and economic elite, ensuring charter schools’ continued success through campaign contributions and political dealings.

Additionally, the Success Charter School chain had submitted eight total co-location applications, five of which were approved by De Blasio. The Mayor’s supporters equate Moskowitz’s actions to those of someone throwing a tantrum for not getting everything she wants. After learning of the three withdrawn applications, Moskowitz closed all Success Academy schools on March 4, 2014 to organize a protest march to Albany to combat the new mayor, and since then has filed a lawsuit against the mayor for his co-location decisions. This is in addition to an event in October in which Moskowitz also closed all her schools to organize a march across the Brooklyn Bridge to protest De Blasio during his mayoral campaign. De Blasio supporters argue that Moskowitz is using cheap political tactics at the expense of students to fight with a mayor who simply blocked three of five new schools from obtaining free rent in America’s largest city.

What are the arguments of those who disagree with De Blasio?

Opponents accuse De Blasio of using politics to level a personal vendetta against the Success Academy leader, and point to charter schools’ proven success rate to argue that these schools should be given the same chance as public schools to flourish in New York City and elsewhere. De Blasio had already made remarks about Moskowitz during his campaign, saying she was a person not to be “tolerated, enabled, and supported.” Some opponents frame these application withdrawals as a Chris Christie-esque act of political revenge.

Additionally, charter schools have been proven successful in New York City. Success Academy Harlem 4’s students have some of the highest math scores in New York State, but with their co-location application denied, they do not have the resources to expand and accept more students. Many parents are upset at the prospect of being forced to send their children to their local public schools, where dropouts and crime are common. In the end, charter school supporters argue, it’s the children who are most affected by De Blasio’s policy. Roughly 600 students already enrolled in the Success Academy schools that were about to be opened up will instead be routed to an uncertain future in the public school system, prompting calls from many to put aside political bickering in favor of true discussion over what is best for New York City’s children.

Washington Post: Why NYC Mayor Is Getting Unfairly Bashed Over Charter Schools

Joseph Palmisano
Joseph Palmisano is a graduate of The College of New Jersey with a degree in History and Education. He has a background in historical preservation, public education, freelance writing, and business. While currently employed as an insurance underwriter, he maintains an interest in environmental and educational reform. Contact Joseph at staff@LawStreetMedia.com.
Share:
Related ItemsBill de BlasioCharter SchoolsEva MoskowitzMayor BloombergNew York CityNYC EducationNYC Public SchoolsSchool Co-LocationSuccess Academy Charter Schools