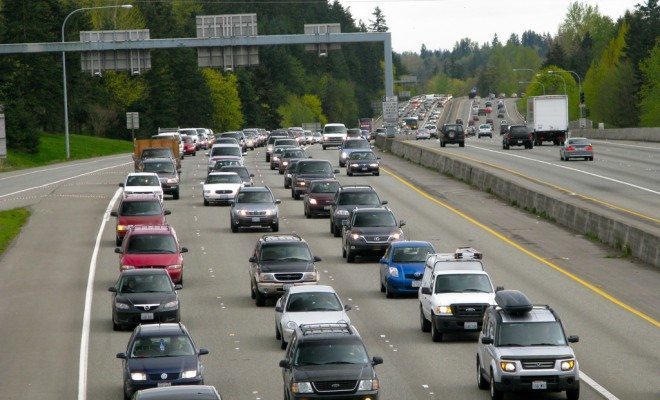 If you liked the debt ceiling debacle and the government shutdown, you are going to love Congress’s fight over funding the construction and maintenance of our roads and highways. Congress has until the end of August 2014 to find a way to fix the billion dollar shortfall in the Highway Trust Fund or they risk the loss of thousands of construction jobs. Here is everything you need to know about the latest battle in Washington that could have direct consequences for the economy and your commute.

What is the Highway Trust Fund?

The Highway Trust Fund was created in 1956 to fund the building and maintenance of the country’s roads and bridges. The fund currently has three separate accounts: Highway Account, Mass Transit Account, and Leaking Underground Storage Tank Trust Fund.

How is it funded?

The Highway Trust Fund is currently funded by a federal fuel tax on gasoline. When it was created by the Highway Revenue Act of 1956, it was funded by a three cent per gallon tax on gasoline. The tax was raised to four cents per gallon in 1959 to keep the fund from going bankrupt. In January of 1983, President Ronald Reagan raised the tax to nine cents. President George H.W. Bush raised it to 14 cents in 1990, but diverted some of the funds to deficit reduction. President Clinton raised the gas tax to its current level, 18.4 cents per gallon, in 1993, but diverted all of the new revenue to deficit reduction. An act of Congress reverted the tax revenue to the Highway Trust Fund in 1997. It has remained at this level ever since. There is also a diesel tax, which is 24.4 cents per gallon.

This video provides a great visualization of how the gas tax works:

Why is the fund going bankrupt?

The gas tax has not been raised since 1993, and it is not indexed to inflation. This means that no matter how high the price of gas rises to, the tax will always remain at 18.4 cents per gallon. So, while the gas tax brings in $34 billion per year, it is paying for projects that total close to $50 billion this year. Also, as car companies are starting to comply with President Obama’s MPG requirement, Americans are driving more fuel efficient cars and purchasing less gas. Couple both of those problems with an American public that is driving less (and therefore buying less gas) and you have a recipe for a shortfall. According to the Department of Transportation (DOT), the fund is on track to run out of money by late August or early September 2014. States have already reacted by canceling future projects or pausing projects currently in progress. For example, the Arkansas State Highway Commission has said they might halt work on the Broadway Bridge and that the state is projected to lose 20,000 jobs as a result. Here’s a report from a local news station in Hawaii about how the shortfall will hurt them:

According to Secretary of Transportation Anthony Foxx, 700,000 jobs are at risk of being lost nationwide. To put that number in perspective, the United States only added 217,000 jobs to the economy last month. And that was a good month.

Why don’t we just raise the gas tax?

Political observers all agree that there is little to no chance of raising the gas tax in this political climate. The UPDATE Act, a bill that would raise the gas tax, was introduced by Rep. Earl Blumenauer (D-OR) this year. It currently has zero co-sponsors and is stuck in committee. Since taking over the House of Representatives in 2010, Republicans have been aiming to cut taxes, not raise them, and neither party wants to raise taxes right before the midterm elections this November.

It does not help that the media will pounce on anyone that argues for an increase in the tax. Watch Fox News’ Neil Cavuto berate Blumenauer for nine and a half minutes over his proposed 15 cent increase of the gas tax:

If the gas tax does not work, what are other possible solutions?

Whenever the fund has reached insolvency in the past, Congress has usually just diverted money from the General Fund of the US Treasury to make up the difference. According to the Congressional Budget Office (CBO), Congress has transferred $41 billion to the fund this way since 2008. In fact, that is what Senate Democrats have suggested doing this year. However, House Republicans have a different idea. They are pushing a proposal that would make the fund solvent by making changes to the US Postal Service, including eliminating Saturday mail delivery. Senate Democrats are not fans of this plan, so it looks like it is time to gear up for another Congressional fight that will last until the final hour.

However, these are not the only two options available to Congress. While Congress only seems to be considering temporary solutions, there are other policy long term options that would fix the Highway Trust Fund permanently.

President Obama and Rep. Dave Camp (R-MI) have both proposed using the benefits of tax reform to fix the shortfall. Obama wants to use the revenue from “pro-growth business tax reform to address the funding crisis.” Camp, as House Ways and Means Chairman, believes we should use the revenue from a simplification of the corporate and individual tax codes to increase transportation funding for the next eight years.

Obama’s tax plan, as outlined in his FY 2015 budget proposal, has the following attributes in regards to transportation reform:

As is clear, both of these plans are polarizing; few things get politicians more worked up than changes to the tax code, and the midterm elections will probably prevent any action on these proposals.

Congress could replace the gas tax with a Vehicle Miles Traveled tax. Instead of taxing drivers at the pump, this tax would be based on how far each driver travels. The government would install tracking devices in every car and those who add more wear and tear to the nation’s roads would be responsible for paying more. Remember that problem about fuel-efficient cars generating less revenue? This would fix that. Even if a driver uses a car with a high MPG rating, they would still pay more in taxes if they drove long distances.

Here’s our old friend Blumenauer advocating for a VMT tax on the House floor in 2012:

This tax has been given a seal of approval from the CBO, so, in theory, the plan should work. Oregon recently passed their own version of the law after a successful pilot program, so policy makers can watch them to see how effective this plan is in practice.

There are some downsides to the tax. Commuters probably would not be big fans of paying a plurality of the tax just so they can get to work every day. Critics are also angry that truckers and people who drive for a living might suffer as a result of this tax. Watch Cavuto, who we already know is not a fan of the gas tax, criticize the costs of a VMT tax with Representative George Price (R-GA).

Privacy advocates are upset because the plan involves tracking every American’s driving with an in-car device. While supporters insist that the government would only keep track of miles traveled and not the location of every driver, the Snowden scandal has ensured that Americans won’t trust the government with any more information about them for quite some time. There’s so much concern over this issue that this Fox & Friends segment described the VMT tax as “Big Brother In Your Backseat.”

Instead of installing trackers in every car, the government could send inspectors to check odometers at the end of each year, but that would require hiring enough inspectors to look at every single American car.

Congress could also decide to just switch the target of the gas tax. Instead of taxing consumers when they buy gasoline, the tax could be placed on sellers of oil. As proposed by Senator Barbara Boxer (D-CA), a wholesale excise tax would take revenue from the oil refineries that sell gasoline to gas stations. This proposal does not have the implementation problems associated with a VMT tax, and, as opposed to the gas tax, it would keep up with inflation. Since, also unlike the gas tax, it is not a user fee, it should be popular with the public. Raising the gas tax is unpopular because it results in the average American spending more money. Taxes on corporations, especially oil companies, are preferable.

This plan also has drawbacks. Since gas prices are so unpredictable, the amount of revenue collected from this tax would be difficult to calculate. It would be tough to know how much money is available for future projects. It also could be used as an excuse by oil companies to raise the price of gasoline. This would not be the first time that federal policy had that effect.

While all of these plans would solve the crisis, none are likely to be passed in the next two months. Congress has to come up with a quick solution to the latest cliff before they can tackle a long-term funding system that is better than the current gas tax. Otherwise, you can look forward to a bumpier ride to work, if you still even have a job.

Department of Transportation: Secretary Anthony Foxx’s testimony before the Transportation, Housing, and Urban Development Subcommittee of the House Appropriations Committee

NPR: 700,000 Jobs Are At Stake If The Highway Trust Fund Goes Broke

Open Congress: Track the bill that would raise the gas tax

Forbes: Raise The Federal Gasoline Tax, Yes, But Don’t Then Spend The Cash On The Roads

Hill: Boxer: Replace gas tax with a wholesale tax on oil to pay for transportation projects

Eric Essagof
Eric Essagof attended The George Washington University majoring in Political Science. He writes about how decisions made in DC impact the rest of the country. He is a Twitter addict, hip-hop fan, and intramural sports referee in his spare time. Contact Eric at staff@LawStreetMedia.com.
Share:
Related ItemsBridgesCongressCongressional GridlockGas TaxGasolineInfrastructureRoadsTaxesVehicle Miles TraveledVMT