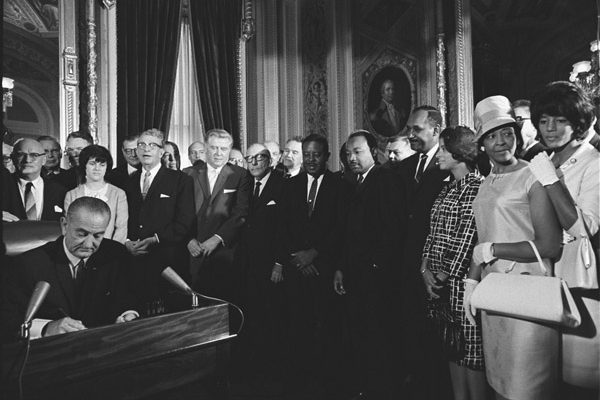 Is the Voting Rights Act of 1965 Still Effective?

The Voting Rights Act of 1965 has long been considered a critical piece of federal legislation in the Civil Rights Movement. Enacted to prohibit racial discrimination in voting, specifically, it has protected racial minorities from unfair and predatory voting regulations like literacy tests, poll taxes, character tests, and property-ownership requirements, to name a few. In 2013, the Supreme Court decided on a case that struck down key provisions of the act, stating that they were based on old circumstances that had no logical connection to present day.

Since that decision, there have been numerous disputes occurring in states that were once subject to the old provisions of the Voting Rights Act. Lawmakers in several states–many southern–have started passing legislation with more stringent requirements to vote. It begs the question, is the Voting Rights Act still relevant and effective today?

History of the Voting Rights Act of 1965

The Voting Rights Act was signed into law in 1965 under President Lyndon B. Johnson during the height of the Civil Rights Movement. It was signed in the wake of “Bloody Sunday,” the infamous voting rights march from Selma to Montgomery where 600 people, including current Congressman John Lewis, were brutally beaten by Alabama state troopers. The Voting Rights Act was meant to eliminate discriminatory election practices, as states were still resistant to enforcing the Fifteenth Amendment, which declared that the “right of citizens of the United States to vote shall not be denied or abridged by the United States or by any state on account of race, color, or previous condition of servitude.”

Section 2 of the act mimicked the language of the Fifteenth Amendment by applying a nationwide prohibition on literacy tests to deny citizens of the right to vote. Moreover, the act also contained other special provisions that only applied to particular jurisdictions. Under Section 5, the act required that specific jurisdictions which attempted to pass new voting practices or procedures needed to receive “preclearance” from the Attorney General or the U.S. District Court for the District of Columbia. Section 4(b) of the act defines eligible districts as those which had a voting test in place as of November 1, 1964 and less than a fifty percent turnout for the 1964 presidential election.

For years, the Supreme Court continually upheld the constitutionality of the Voting Rights Act, including Section 5. This included thwarting racial vote dilution through discriminatory annexations, redistricting plans, election method changes, and changes in voter registration standards and procedures. The section was originally enacted for five years, but has been renewed continually since its enactment.

In 2013, the Supreme Court ruled in the case of Shelby County v. Holder. The case, which was out of Shelby County, Alabama, concerned both Sections 4(b) and 5 of the Voting Rights Act. Shelby County sued Eric Holder, the Attorney General at the time, arguing that Section 4(b) and Section 5 were facially unconstitutional, and sought a permanent injunction against their enforcement.

After making its way through the lower courts, it finally reached the Supreme Court. The justices had to decide whether the renewal of Section 5 under Section 4(b) restrictions exceeded Congress’ authority under the Fourteenth and Fifteenth Amendments, in turn violating the Tenth Amendment and Article Four of the Constitution.

The Supreme Court held, in a 5-4 opinion, that Section 4 of the Voting Rights Act was unconstitutional. Essentially, the Court stated that the current formula conflicted with equal sovereignty of the states, as the disparate treatment of states was based on forty-year-old facts, which had no relationship to present day. As Chief Justice John Roberts wrote, “Our country has changed and while any discrimination in voting is too much, Congress must ensure that the legislation is passes to remedy that problem speaks to current conditions.”

Since the court’s decision in 2013, many former preclearance states in the South are now embroiled in legal challenges surrounding voting laws. In Texas, the federal district court recently ruled that Senate Bill 14, which required voters to show a form of photo ID before casting a vote, had a discriminatory effect. Senate Bill 14 was passed in 2011, but was blocked by the preclearance requirement of the Voting Rights Act. After Shelby County v. Holder, Texas officials said they planned to enforce the law.

Lawmakers in North Carolina passed a photo ID requirement, and curbed early-voting hours, same-day voter registration, and limited other registration and voting options. This was eventually struck down by the Fourth Circuit, which noted that the provisions targeted African-Americans with “almost surgical provision.” The Supreme Court declined to stay the ruling in a 4-4 split after Justice Antonin Scalia passed away last year. North Carolina has asked the court to hear the case fully, and now that the court has added Justice Neil Gorsuch it’s possible that it could grant the petition for review.

Just recently, a lawsuit has been brought by the Lawyers’ Committee for Civil Rights Under Law on behalf of five organizations regarding the special election slated to take place in June 2017 in Georgia to replace Republican representative Tom Price. Since the Democrat, Jon Ossoff, failed to achieve the fifty percent threshold needed to win outright, a special election will decide his fate, against Republican Karen Handel. The suit alleges that the Georgia law disenfranchises citizens by requiring voters to have registered for the first round to vote in the runoff. Consequently, since the law means that voters would have had to register in March 2017 to vote in the runoff (before the first election even occurred), a large number of Georgians may be completely stopped from voting in the June 2017 election.

It is Still Relevant?

Just four short years ago, the Supreme Court in Shelby County v. Holder was not hesitant to point out how key sections of the Voting Rights Act were not relevant to modern times. The majority opinion concluded that since the act had worked so well in preventing racial discrimination, it was no longer needed. However, given the numerous laws that have sprung up since the court’s decision, it seems that the act is just as necessary today.

After the act’s initial enactment, it had an instant effect on decreasing racial discrimination in voting. Not only did the number of registered African-American voters increase substantially, but the number of African-Americans elected to office also grew. Moreover, economic growth occurred because of the act. A study of 40 North Carolina counties covered by the act found that those counties experienced larger growth in African-American incomes, occupational status, and attracted more revenue from county and other government sources.

Now, without Section 4(b) in effect to determine which jurisdictions must receive approval of any voting law changes, Section 5 has now become relatively inoperative. Thus, this has allowed states to change laws and policies without any federal oversight.

After Shelby County v. Holder, many former preclearance states jumped at the opportunity to pass more restrictive voting requirements. While lower courts have found subsequent legislation to contain discriminatory intent or effect, the Supreme Court has yet to weigh in on them. Thus, with a full court now in place after Justice Gorsuch’s swearing-in, the legacy of the Voting Rights Act is still up for debate.

Nicole Zub
Nicole is a third-year law student at the University of Kentucky College of Law. She graduated in 2011 from Northeastern University with Bachelor’s in Environmental Science. When she isn’t imbibing copious amounts of caffeine, you can find her with her nose in a book or experimenting in the kitchen. Contact Nicole at Staff@LawStreetMedia.com.
Share:
Related ItemsCivil Rights MovementRacial DiscriminationSCOTUSselmaShelby county v. holderVoting RightsVoting Rights ActVRA