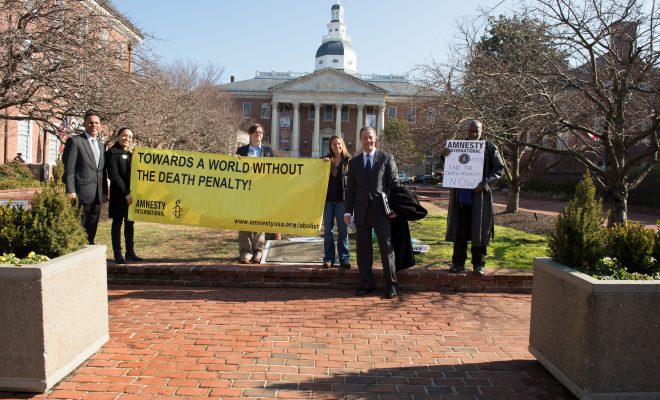 Death Penalty in the United States: Why We Still Have It

What does the death penalty look like in the US?

The death penalty is legal in the United States–although it is up to the state’s discretion to determine whether or not to make it permissible within its borders. Currently 32 states have capital punishment laws on the books. The death penalty was, briefly, rendered essentially illegal in the United States by the 1972 Supreme Court case Furman v. Georgia but was reinstated in 1976 with the case Gregg v. Georgia. Between when the death penalty was reinstated in 1976, and the end of 2014, almost 1,400 prisoners have been executed.

The United States’ perspective on the death penalty is unique among many of its allies and peer nations. Japan is often described as the only other industrialized nation to use the death penalty. A full 140 other nations have abolished the practice. In 2013, the United States killed the fifth most people in the world, ranking only behind China, Iran, Saudi Arabia, and Iraq. Pakistan, Yemen, North Korea, Vietnam, and Libya round out the rest of the top ten.

What does the legal argument surrounding the death penalty look like?

The debate over the death penalty in America typically rests on the Fifth and Eighth Amendments.  The Fifth Amendment established due process in the American legal system, stating that a person shall not “be deprived of life, liberty, or property, without due process of law.”  On the other hand, the Eighth Amendment prevents the use of “cruel and unusual punishment.” Judges have interpreted these two amendments to mean that the death penalty is constitutional as long as it is carried out as humanely as possible and only after due process.

What are the arguments against the death penalty?

Opponents of the death penalty claim that such punishment is immoral and violates the sanctity of life, while others argue that those claims are based on faith and religion, which should not be the basis of American law. Although there has been a trend in opposition to capital punishment, the majority of Americans are still in favor of such a penalty.  Deterrence statistics generally promote the effect of the death penalty, but a lot of doubt still remains. Certain organizations, like the European Union, have taken strong stances in opposition to the penalty citing issues of human rights.

Those who don’t believe in the death penalty also bring up concerns about the history of racism within American capital punishment. Forty-two percent of inmates on death row are black, despite the fact that black people are only around 14 percent of the American population. Particularly there’s concern that black defendants are sentenced to death at a disproportionate rate when their alleged victims were white. As Amnesty International points out:

A 2007 study of death sentences in Connecticut conducted by Yale University School of Law revealed that African-American defendants receive the death penalty at three times the rate of white defendants in cases where the victims are white. In addition, killers of white victims are treated more severely than people who kill minorities, when it comes to deciding what charges to bring.

In addition, arguments against the death penalty point out that sometimes those executed are exonerated after the fact, after new evidence, re-tested evidence, or changing testimony is made clear. While exact numbers are almost impossible to quantify, a study in 2014 estimated that more than 4 percent of prisoners on death row were probably innocent.

What are the arguments for the death penalty?

Those who believe in the death penalty argue that it’s a fair sentence, reserved for those who commit only the most heinous crimes. It prevents them from ever committing a horrible crime again with a finality that no other method of punishment could possibly guarantee. It can also act as a deterrent to others who would consider committing such crimes. In addition, it provides a level of closure for the family and loved ones of the victim. Many Americans do believe that some people deserve the death penalty. As Rick Perry put it in the lead-up to the 2012 elections:

No, sir. I’ve never struggled with that at all. The state of Texas has a very thoughtful, a very clear process in place of which — when someone commits the most heinous of crimes against our citizens, they get a fair hearing, they go through an appellate process, they go up to the Supreme Court of the United States, if that’s required.

The arguments for and against the death penalty in the United States are far from over. Politicians will still be asked their opinions on the controversial practice, passionate appeals will continue to be made, and states will still be free to make their own laws regarding the punishment. While the legality may no longer be as strong a point of contention as it used to be, the arguments over the death penalty are sure to continue.

DeathPenalty.org: California’s Death Penalty: All Cost and No Benefit

ACLU: The Case Against the Death Penalty

The New York Times: More Evidence Against the Death Penalty

US News: Conservative Case Against the Death Penalty

PBS: Is the Death Penalty Unjust?

ProCon: Should the Death Penalty be Allowed?

Economist: Democracy and the Death Penalty: an Evolving Debate

Santa Clara University: Capital Punishment: Our Duty or Our Doom?