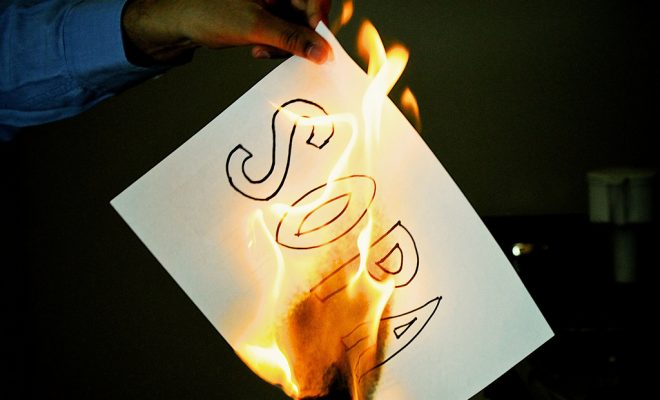 SOPA: The Argument is Over, but the Dust Hasn’t Settled

The Stop Online Piracy Act (SOPA) was a bill  proposed in Congress in 2011 that immediately made headlines because opponents argued that it was too restrictive and had the potential to hamper free speech. It did not end up passing, but the ideas and motivations behind it still remain up for debate. Read on to learn about SOPA, the legislative battles surrounding it, and where we stand now.

The provisions of the bill primarily included increased federal enforcement of copyright laws and increased government action against entities involved in copyright infringement. These provisions include allowing both the U.S. Department of Justice and private copyright holders to obtain injunctions against copyright infringement by foreign-based entities. The bill would have allowed the Justice Department to bar internet advertising networks and payment network providers from servicing infringing websites e.g. torrent websites, sites that allow streaming of copyrighted movies or TV shows, etc. SOPA also would have prevented search engines from providing links to those websites.

SOPA aimed to increase the criminal penalties infringers face under the law.  For example, the penalties for economic espionage would have been a maximum of 15-20 years imprisonment and fines up to $5 million. The bill would have increased the realm of copyright crimes to include those perpetrated by “electronic means.”  Criminal penalties would have increased for IP infringement of government information or infringement that results in harm to government personnel or interests.

SOPA also would have had major implications for IP civil jurisprudence. Private entities are given rights against infringers as well. If a private entity is damaged by infringement and wishes to exercise SOPA rights they could have sent written notification to payment agents and advertising networks connected with the alleged offending site who then have to inform them and cease service unless the alleged infringer can respond with a counter-notification, indicating that they are not infringing. The copyright holder would have been able to bring an action for injunctive relief against the infringing site’s owners if either a counter-notification was provided or payment networks continue serving the alleged infringer without a counter-notification. Applying SOPA rights to foreign sites would have required them to consent to U.S. jurisdiction to determine if they are dedicated to infringement.

What was the argument for SOPA?

Proponents of the bill believed that SOPA could have created a lot of benefits for the public. It created major difficulties for perpetrators of IP crime because it would have given private companies the means and authorization to enforce and protect their own intellectual property rights. This allowed IP crimes to be remedied more quickly and at a far lower cost to the public because it could be done without the time constraints and expense of adjudication. This would improve the economy by decreasing government spending on investigating and prosecuting IP crimes. The fear of facing civil litigation under SOPA and the strengthened criminal penalties would have created a strong disincentive for many forms of infringement. Furthermore, by hamstringing IP infringement SOPA would make the U.S. more attractive to authors and innovators and reinvigorate the economy with increased job creation.

What was the argument against SOPA?

Opponents highlighted SOPA’s drawbacks. Under the law, even when a valid counter-notification would have been sent, third-party servicers were not required to resume serving accused websites.  SOPA also insulated the third parties from all lawsuits except those initiated by the copyright holder.  Therefore, the law allowed and perhaps even incentivized companies to limit other companies’ legal and commercial rights without judicial oversight, leaving SOPA vulnerable to the objection that it violates individuals’ constitutional due process. Non-infringing companies may be damaged by having valuable business relationships taken away from them without a meaningful opportunity to be heard and without legal recourse. This is because even if a company is found to be non-infringing there is no requirement that the discontinued services be reinstated. Finally, SOPA would not have accounted for the proportionality of the alleged infringement relative to the alleged infringer’s website. For example, under SOPA if one person uploaded an allegedly infringing video on Facebook and the owner exercised his SOPA rights he could potentially bring SOPA action against Facebook in its entirety.

What happened with SOPA?

There was a lot of backlash against SOPA from high-profile and much-used websites. On a few different days websites blacked themselves out to protest SOPA. The blackouts not only called attention to the issue, but also served as a sort of warning to consumers that if they did not get involved in stopping SOPA, some of their favorite websites would be threatened. Participants included Wikipedia, WordPress, and BoingBoing. Eventually, SOPA ended up failing. There were attempts to revive it about a year later, but nothing really came of those.

SOPA is the perfect example of the disconnect between technology and the people making our laws. On paper the idea sounded good, but in practice there were significant problems with the proposed law. While the debate over copyright and technology is far from over, SOPA almost certainly is.

100gf: Why SOPA Might be the Best Thing That’s Ever Happened to the Internet

Vulture: Polone: Why I’m for SOPA, and How the Entertainment Industry Blew It

Cracked: The Only Argument on the Internet in Favor of SOPA

Washington Post: SOPA Died in 2012, But Obama Administration Wants to Revive Part of it

Mashable: Why SOPA is Dangerous

TechDirt: Supporters of SOPA/PIPA Make Arguments That Make No Sense

CNN: SOPA Explained: What it is and Why it Matters

NickEhrenberg: The Arguments For and Against SOPA/PIPA (and now CISPA)