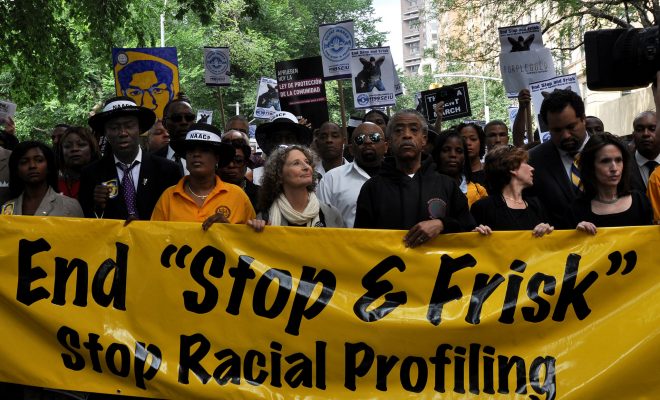 Judging a Book by its Cover: The History of Racial Profiling in the United States

During the campaign, President-elect Donald Trump gave a speech in the wake of two bombings in New York and New Jersey. In response, Trump said that the police force should have the ability to profile suspects in order to be able to target individuals and subsequently catch criminals faster. While people quickly debated what exactly Trump was calling for, whether it was racial profiling versus criminal profiling, his comments immediately stirred debate over the questionable practice.

Read on to find out more about the history of racial profiling, how it is still used, its effectiveness, and the impact it has on individual freedom.

In criminal profiling, the cumulative characteristics of people who have committed a crime are used to identify those who may be likely to commit the same crime. However, racial profiling assumes any member of a racial or ethnic group of people may commit a crime because of who they are.

In addition, part of racial profiling is willfully overlooking members of the majority when they commit crimes. The ACLU cites the following example:

An African American man in Maryland, who after moving into a white community, was attacked and subjected to property damage. Local police failed to respond to his repeated complaints until they arrested him for shooting his gun into the air, trying to disperse a hostile mob outside his home.

The accompanying video looks at the practice of racial profiling and what it means:

Racial profiling in the United States traces its roots all the way back to colonial times. One of the earliest examples was a registry in which free blacks were required to enlist. The registry kept track of a number of physical characteristics as well as how that person came to be free. The idea behind it was to limit the movement of free black people around the South. If they were unable to prove their status they could even be forced into slavery. This kind of targeting particularly reemerged during the Jim Crow era and continued on throughout the Civil Rights Movement and into the present. Often when it comes to racial profiling, the discriminatory practices are not written down in a record but implied.

The closely associated criminal profiling also has a long history, dating back to the 1880s in England when experts tried to track down the elusive Jack the Ripper. Profiling in the United States began gaining momentum in the late 1950s with profiles contributing to the arrest of suspects in high-profile crimes. In 1974 the FBI launched its Behavioral Science Unit utilizing profiling techniques to locate serial rapists and murders. Over the years psychology has taken a major role in these profiles as certain, common traits are identified in many of the cases and used to pinpoint other offenders. While this approach is used more to identify specific individuals guilty of specific crimes, it also creates a template for future investigations to use as well, which is similar to how the ACLU describes criminal profiling. Nevertheless, these same profiles cannot be overly broad generalizations, or they risk being another form of racial profiling.

The Use of Profiling

In his speech, one of the points Donald Trump alluded to was Israel’s use of racial profiling and the success it has had with it. While many other Western nations have shunned the practice, Israel has readily adopted it as a means of protection. This is especially true in airports where people with Jewish last names or links to Israel are able to quickly move through security while those from other regions, particularly from predominantly Muslim regions, are often held up for hours for intense inspections.

While the United States does not have similar programs, for the most part, there is one glaring exception that generated a lot of high profile coverage just a few years ago. That is the infamous stop-and-frisk program that was a major component of the New York Police Department’s effort to fight crime. While the city claimed this program was an effective way to reduce crime, a federal judge disagreed, claiming instead that it provided cover for officers to target non-white citizens in unnecessary and illegal ways.

While police officers are well within their right to stop someone they suspect of committing a crime or are likely to commit a crime, they must be able to demonstrate some cause. However, in the case of stop-and-frisk, people of color were being stopped at a disproportionately high rate, which led a federal judge to deem the policy unconstitutional. In fact, 83 percent of the stops conducted by the NYPD between 2004 and 2012 were of black or Hispanic people, while those groups made up slightly more than half of the city’s population. The following video gives the details behind the stop-and-frisk ruling in New York:

Although stop-and-frisk was really the only major program that led to clear racial profiling in an attempt to fight crime, as mentioned earlier, racial profiling is often done without a directive or anything on the books. The ACLU, for example, has a long list of what it claims are incidents of racial profiling against a variety of minority groups. Over the last couple of years, there have been a number of high-profile incidents involving white police officers and non-white victims, which certainly seem to indicate racial profiling does still occur even without an explicit policy.

When it comes to criminal profiling, the practice has gotten a lot of attention in popular culture but its effectiveness has also been called into question. Part of the problem is that criminal profiling is not much more reliable than racial profiling. According to a small study done in Britain, only 2.7 percent of 184 cases showed that the practice helped lead to an arrest. The main issue was there were so many different characteristics that it was hard to create a single profile that would be used to capture criminals. This sentiment was echoed by a Secret Service report on school shooters that suggested that potential shooters would have to be identified on an individual basis because they were all so different. The most common results, unfortunately, were confirmation bias at best, and at worst simply another form of prejudicial profiling.

Evaluating the Use of Profiling

Since racial profiling only targets a select group of people it is unsurprisingly not very effective. For the clearest evidence, one need only to look at New York’s stop-and-frisk program once more. Of all the people stopped, nearly 90 percent were released with no further action and were free to go. In other words, only 6 percent of stops ended with an arrest and another 6 percent resulted in court summonses. In fact, the data indicates that stop-and-frisk likely had little relation to the number of murders and other violent crimes in New York.

Other instances, such as the ones listed by the ACLU, also show how racial profiling is typically not effective. In fact, these instances of racial profiling only seem to make matters of crime worse as they encourage disaffected people to lash out in anger.

Not only is racial profiling ineffective it can also be harmful in the long run. The reason for this is because people who are unfairly targeted by police tend to feel a reduced trust in the police force as an effective means of fighting crime. When people do not trust the police, then the police are less able to do their jobs because they lack both authority and the necessary assistance from communities to help them with their work.

This feeling of being excessively targeted also seems to be supported by the numbers. The clearest example, and by now one that is well-worn, is the existence of clear racial discrepancies in prisons. Black male children born in 2001 are approximately 5.5 times more likely than white children to be incarcerated at some point in their life.

From a dollars and cents perspective, racial profiling is also costly. Retraining officers following a racial profiling incident or paying a settlement for racial profiling can cost a city or police department millions, if not tens of millions of dollars. There are countless examples of this, one of the most egregious is in Arizona–where the actions of notoriously prejudiced Sheriff Joe Arpaio just cost his county $22 million in settlements with Latino community members.

Like other controversial techniques for preventing crime, racial profiling does have its defenders. They argue that it has been successful in reducing crime and point to examples like stop-and-frisk in New York and to other countries that embrace the measure such as Israel. It even has a closely related cousin, criminal profiling, which relies on somewhat related methods to help in the hunt for criminals.

However, like many of those very same controversial techniques, the numbers suggest racial profiling actually does not really reduce crime at all. In fact, it may actually increase crime by lowering trust in police and diminishing officers’ effectiveness in minority communities. It also seems to fill prisons in the United States disproportionately by race while also costing police department millions in settlements and training.

Racial profiling then seems to be a practice that is more harmful than good. However, the reality of that may not outweigh some people’s perception that it is effective. In either case, the practice is unlikely to be done away with entirely, in the meantime it is likely to make the tenuous relationship between the police and many communities even worse.

American Psychological Association: Criminal Profiling: The Reality Behind the Myth

Center for Science and Law: Criminal Profiling, Present, and Future

Economic Policy Institute: Where Do We Go from Here? Mass Incarceration and the Struggle for Civil Rights

Michael Sliwinski
Michael Sliwinski (@MoneyMike4289) is a 2011 graduate of Ohio University in Athens with a Bachelor’s in History, as well as a 2014 graduate of the University of Georgia with a Master’s in International Policy. In his free time he enjoys writing, reading, and outdoor activites, particularly basketball. Contact Michael at staff@LawStreetMedia.com.
Share:
Related ItemsCriminal ProfilingPolicePolice TacticsPolicingRacial ProfilingRacismStop and Frisk