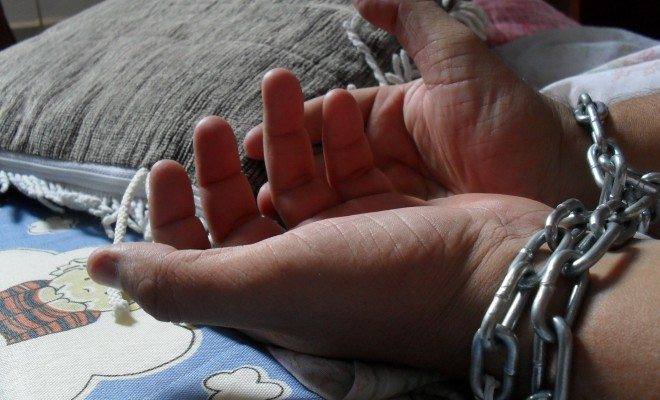 What is human trafficking?

According to the Office of Refugee Resettlement, “victims of human trafficking are subjected to force, fraud, or coercion for the purpose of commercial sex or forced labor.” It exists in rural, suburban, and urban locations. Human trafficking is sometimes known as modern day slavery. It usually occurs in the U.S. when people from other nations are brought in illegally to serve as free labor.

Human trafficking commonly brings to mind confinement, blindfolds, and drugs. Sometimes that can happen, but human traffickers also practice more subtle approaches. They influence their victims with various means, including:

Each of these strategies is designed to make victims feel helpless and alone.  A demoralized victim is a weaker victim. Empowered victims are more likely to run away, alert authorities, and/or take a stand.

What happens to the victims of human trafficking?

There are long-term damages to victims of human trafficking. Tragically, a large percentage of these victims are children. Physically, victims of human trafficking can suffer from disease, stunted growth, and malnutrition. Psychologically, many victims will bypass key social, moral, and/or spiritual development. They can feel ostracized from the outside world. They are also at higher risk to fall victim to similar crimes again.

It is important to note that due to the invisibility and nature of these crimes, statistics vary widely. While the following statistics are based on estimates, they’re still very disturbing.

There are quite a few estimations, but there are approximately 27 million slaves around the world, although only six percent are considered “identified.” There 800,000 people  trafficked across international borders every year, and one million children fall to the commercial sex trade. Of all the world’s trafficking victims, 80 percent are women and children. There are currently 161 countries affected by human trafficking, which is a $32 billion industry.

A 2009 podcast, “Inside the FBI,” details the account of a prominent U.S. human trafficking case. In it, Neal Schiff interviews FBI Special Agent Tricia Whitehill. She was involved in a case where multiple members of the Vasquez-Valenzuela family were indicted for “conspiracy, sex trafficking, and various immigration offenses.”

The investigation all started in 2006 when the family’s taxi driver called in a tip to CAST, the Coalition to Abolish Slavery and Trafficking. He remained a source throughout the investigation. The family had brought in girls in their teens and early twenties from Guatemala to the U.S. The family targeted poor and uneducated girls, some of whom did not even know their own birthdays. The Vasquez-Valenzuela family lured the girls back to the U.S. by promising them jobs in the jewelry and restaurant industries.

Once the girls were successfully smuggled, they were told they owed a debt that had to be paid in prostitution. If the girls didn’t initially comply, they were threatened with violence, witchcraft, and the death of their families. After the arrests of eight out of the nine offenders, one family member was left unaccounted for and went on the run. She was finally weeded out of hiding through the help of publicity and the general public. Public awareness can make all the difference. The leader of the family received the toughest sentence of 40 years in prison.

While this was a case in which the traffickers were successfully apprehended, in many more instances that’s not the case, even in the U.S.

What legislation does the U.S. use to fight trafficking?

The Trafficking Victims Protection Act of 2000

Long overdue in 2000, this act officially made human trafficking a federal offense. A federal crime is prosecuted under federal criminal law. It also includes provisions for the victims, including federal and state assistance, asylum in the U.S., and shelter and counseling.

Intelligence Reform and Prevention Act of 2004

This law established a Human Smuggling and Trafficking Center to “serve as a focal point for interagency efforts to address terrorist travel.” It promotes cooperation between state, federal, and intelligence agencies in this effort. It also requires an annual assessment delivered to Congress “regarding vulnerabilities in the United States and foreign travel system that may be exploited by international terrorists, human smugglers and traffickers, and their facilitators.”

A large percentage of human trafficking occurs in the labor industry, for example in restaurants. This legislation creates investigations into properties suspected of human trafficking and alerts property owners. This prevents the ability of owners to claim ignorance of criminal activity on their property.

The campaign focused on two aspects. First, it promoted the National Human Trafficking Resource Center, a 24-hour, multi-lingual hotline designed for victims and members of the community. The campaign also encouraged victims to come out of the shadows and seek the help they deserve. The campaign tried to induce a sense of community for victims feeling alone.

The promotion also brought on board regionally elected officials and spokesmen like former NFL player and actor Terry Crews. He championed the cause saying:

Modern slavery is the husband coerced through violence to harvest crops, it’s the mother forced to work excessive hours as a domestic servant with little pay, and it’s the daughter sold online for sex against her will. Modern slavery is the 20.9 million people worldwide estimated to be victims of sex and labor trafficking, and we must do what’s in our power to restore their freedom. The more we raise awareness about the help available for victims of human trafficking in America, the more we can empower them to become survivors.

The more people who receive this message, the stronger the fight. The campaign hopes to target more cities across the U.S. in the future.

In a step to bring further awareness to the general public, President Obama designated January to be National Slavery and Human Trafficking Prevention Month. In a press release, he wrote:

Even today, the darkness and inhumanity of enslavement exists. Millions of people worldwide are held in compelled service, as well as thousands within the United States. During National Slavery and Human Trafficking Prevention Month, we acknowledge that forms of slavery still exist in the modern era, and we recommit ourselves to stopping the human traffickers who ply this horrific trade.

In September 2012, continuing his commitment, President Obama spoke to the Clinton Initiative in New York. Partnered with former Secretary of State Hillary Clinton, the President laid out a three-part plan to combat human trafficking. First, to “spot it and stop it.” That part of the plan calls for extensive reports to further government understanding, more effective training for all interagency task force members involved, collaboration with transportation services, and aid educators to spot potential trafficked victims among their students. Second, the plan hopes to use the internet as a weapon against human trafficking. The internet has been a great tool for the human-trafficking industry and the President wants to “turn the tables.” The plan aims to recruit tech companies and college students to the fight. Third, the plan aims for further dedicate resources for recovery. For example, to simplify the application for T-visas, designed to protect victims of human trafficking.

Other Groups Involved in the Fight Against Trafficking

There are many other groups involved in the fight against trafficking that attack different parts of the problem. They include:

With all of these laws in place, and so many activists working to fight it, why is trafficking still happening at such an alarming rate? It is hard to stop an industry so high in demand across the globe, regardless of its vile nature. In recent years, the internet is largely to blame. It allows for anonymity and easy communication internationally between buyer and seller. The deep web, not accessible through standard web searches, is a large black market tool. Another answer is that sex trafficking is almost impossible to obliterate when most of the victims are unidentified. Both rape and sexual slavery victims rarely come forward due to the highly personal sensitivity of the crime. However, we’re taking steps in the right direction with more laws and movements of activism. Hopefully, someday, the travesty that is human trafficking will become a thing of the past.

Office of Refugee Resettlement: What is Human Trafficking

Case Act: What is Human Trafficking

Jessica McLaughlin
Jessica McLaughlin is a graduate of the University of Maryland with a degree in English Literature and Spanish. She works in the publishing industry and recently moved back to the DC area after living in NYC. Contact Jessica at staff@LawStreetMedia.com.
Share:
Related ItemsDepartment of Homeland SecurityDHSHuman TraffickingImmigrationImmigration LawsInternationalKidnappingSex TraffickingSlaveryUnited States