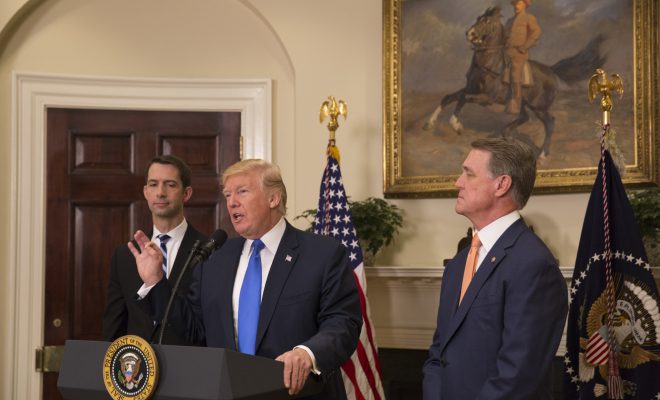 On Wednesday, President Donald Trump endorsed a bill, introduced by Senators Tom Cotton (R-AK) and David Perdue (R-GA) in February, which would halve the number of legal immigrants coming to the U.S.

The RAISE Act would cap the number of green cards the U.S. issues at 50,000 over the next 10 years. Currently, the U.S. Citizen and Immigration Services awards about one million green cards each year; about six million individuals and employers apply for a green card each year.

Green cards grant legal immigrants the right to permanently reside and work in the country, instead of having to apply and constantly renew work visas.

Inspired by the Canadian and Australian immigration policies, the proposed legislation would establish a competitive “merit-based system,” through which applicants would be awarded points based on a slew of factors. Some of the factors would include an applicant’s financial stability, ability to pay for healthcare, earning prospects, and, most controversially, English language skills.

The RAISE ACT “puts great downward pressure on people who work with their hands and work on their feet,” Cotton said. “Now, for some people, they may think that that’s a symbol of America’s virtue and generosity. I think it’s a symbol that we’re not committed to working-class Americans. And we need to change that.”

The bill also removes the diversity visa program and “chain migration,” the current practice of prioritizing family unity in the immigration process.

This announcement comes on the heels of the Senate’s failure to repeal and replace Obamacare. Many equate this push for legal immigration reform to the administration trying to turn the page on healthcare and secure its first legislative win.

Trump campaigned on reforming immigration, legal and illegal, but several of his initiatives have either run into road-blocks or devolved into large-scale media disasters. Trump’s promised wall along the Mexican border remains unbuilt, and the attempted Muslim ban was stopped in court a number of times earlier this year.

However, Trump’s “America first” message remains at the forefront of his policies and his endorsement of this bill further highlights this.

“The RAISE Act prevents new migrants and new immigrants from collecting welfare, and protects U.S. workers from being displaced,” Trump said. “And that’s a very big thing. They’re not going to come in and just immediately go and collect welfare. That doesn’t happen under the RAISE Act. They can’t do that.”

The bill is very unlikely to pass Congress, as it would need unified Republican support as well as some Democratic votes. Some Republicans have already said they would not support the bill. Sen. Lindsey Graham (R-SC) released a statement on Wednesday, saying that he agrees with the ideas expressed in the bill, but he would not vote in favor of the legislation.

“South Carolina’s number one industry is agriculture and tourism is number two,” Graham said. “If this proposal were to become law, it would be devastating to our state’s economy, which relies on this immigrant workforce.”

Sen. John McCain (R-AZ) also cast doubt on his colleagues’ bill. “I think you have to consider that we do want high-tech people, but we also need low-skilled people who will do work that Americans won’t do,” he said. “I wouldn’t do it. Even in my misspent youth, I wouldn’t do it.”

While many Trump advocates support the policy proposal, the bill is drawing significant criticism from economists, citizens, and immigrants.

“Dramatically reducing overall immigration levels won’t raise the standard of living for Americans,” said Randy Johnson, senior vice president for labor, immigration, and employee benefits at the U.S. Chamber of Commerce. “In fact, it will likely accomplish the opposite, making it harder for businesses, communities, and our overall economy to grow, prosper, and create jobs for American workers.”

Some see the RAISE Act as focusing too much on making sure Americans in low-wage jobs don’t face competition from immigrants, instead of investing in those same Americans so that they may obtain higher paying jobs.

It's interesting that outside of immigration policy, nobody ever proposes giving strict priority to the interests of high school dropouts.

Others object to the limits the bill would place on bringing in grandparents or extended family members to the U.S. Under the bill, people like First Lady Melania Trump, a non-native English speaker, would have a tough time getting permanent residency.

“What the president is proposing here does not sound like it’s in keeping with American tradition when it comes to immigration,” CNN’s Jim Acosta said during a White House press conference. “The Statue of Liberty says, ‘Give me your tired, your poor, your huddled masses yearning to breathe free.’ It doesn’t say anything about speaking English or being a computer programmer.”

In his response to Acosta’s question, Stephen Miller, Trump’s policy adviser, said: “The poem that you’re referring to was added later, [and] is not actually part of the original Statue of Liberty.”

Celia Heudebourg
Celia Heudebourg is an editorial intern for Law Street Media. She is from Paris, France and is entering her senior year at Macalester College in Minnesota where she studies international relations and political science. When she’s not reading or watching the news, she can be found planning a trip abroad or binge-watching a good Netflix show. Contact Celia at Staff@LawStreetMedia.com.
Share:
Related ItemsDiversityDonald TrumpEnglishGreen CardImmigrationLawPerdueTom Cotton