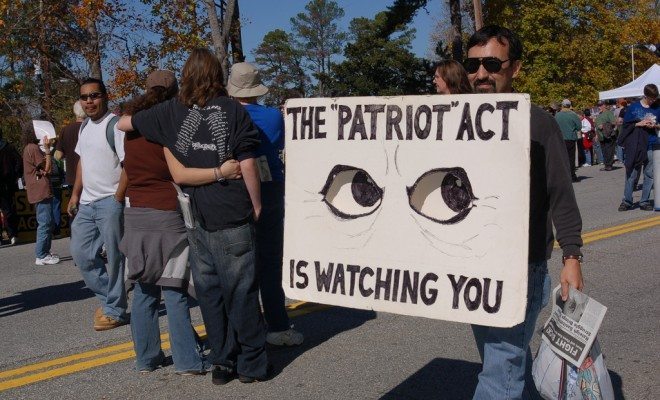 Portions of a law known as the Patriot Act were allowed to expire on May 31, 2015. The Patriot Act is one of the most controversial laws in U.S. history, originating in a time of fear and later being at the heart of leaks by Edward Snowden that revealed a massive data gathering effort by the NSA of Americans’ information. Read on to learn more about what exactly the Patriot Act is, where it originated from, and the future outlook of its laws.

The Patriot Act is one of most divisive laws passed in recent history; however, like many other boogeymen, the actual details of what it entails are unclear to much of the American public. So what exactly is the Patriot Act?

What is the Patriot Act?

The USA Patriot Act or the Uniting and Strengthening America by Providing Appropriate Tools Required to Intercept and Obstruct Terrorism Act, was passed in October 2001. The act dramatically expanded the ability of the United States government to conduct surveillance and investigate citizens without their knowledge.

Unlike similar preceding pieces of legislation, this act lacked the familiar protections that preserve rights in the face of legislation; its statutes were also hard to define and limit. This was due to the speed at which the law passed through congress and was signed by President George W. Bush. The bill was passed quickly due to widespread fear mongering immediately following the 9/11 terrorist attack on U.S. soil, including on the part of Attorney General John Ashcroft who warned any delay could result in another devastating attack.  Watch the video below for more details on the Patriot Act.

In the first legal challenge to the act, despite it being in place since 2001, a three-judge panel ruled the law illegal. The panel, however, did not say the law was unconstitutional; instead that the federal government’s mass-data collections had gone beyond what the original creators of the act envisioned when they signed it into law. This is an important distinction in that it effectively says that lawmakers have power to create such an all-encompassing law, but that the Patriot Act was no such law.

While the recent ruling may have impacted the decision to let parts of the law expire, the Patriot Act was actually created with built in sunset provisions that were designed to expire unless extended by congress. Thus, after much deliberation, key components of the act were allowed to expire. One such aspect was the so-called Lone Wolf provision, which basically allowed the U.S. intelligence system to monitor individual people even if they had no known terrorist affiliation. This clause was supposedly never used and it was only allowable against non-citizens.

Another major aspect allowed to expire was the roving wiretap. As the name implied, it allowed the surveillance network to maintain taps on any one of a person’s devices, not just a single phone.

Probably the most well-known provision of the law allowed to expire was section 215. This section was the grounds the NSA used to collect data on a large number of Americans without their express permission, even if they were not suspected of terrorism or of any other crime. This section had also been used by agencies such as the CIA and FBI to track financial records of suspected terrorists and criminals.  The video below highlights what provisions of the Patriot Act will expire and what that means, specifically in relation to section 215.

Its Future and Its Successors

While these unpopular parts of the Patriot Act were allowed to expire, a similar successor was quickly passed. Known as the Freedom Act, this new law allows for greater transparency and puts the onus for compiling phone records on companies. Additionally, the Freedom Act also requires the disclosure of how often data collection is requested and allows for more opinions from judges from the mysterious Foreign Intelligence Surveillance Court.

In the aftermath of the expiration of parts of the Patriot Act and following the passage of the Freedom Act, opinions quickly poured in. While those who supported the Patriot Act claim that this has led to a degradation in U.S. security, many others actually view the two bills as essentially the same. In fact, for this latter group, the new Freedom Act does little more than privatize the collection of people’s data while offering the vaguest efforts at greater transparency. Under the Patriot Act, the NSA was compiling the data, but now the onus will fall on the telecom companies themselves. Now the companies will store the data and whenever the NSA or FBI wants to use it they will need to get a warrant from the Foreign Intelligence Surveillance Court.

Aside from changing who collects the data, the new law really does not do much. This new collection method may actually cost more due to private inefficiencies and also the money the government will pay the companies for their efforts. It also protects these same companies, such as AT&T, from lawsuits. Meaning, regardless of opinion, Americans may now be paying more money to spy on themselves. The video below explains the specifics of the new Freedom Act, even suggesting that it might lead to more widespread surveillance.

When the Freedom Act successfully passed through congress, despite repeated efforts by Senate Majority Leader Mitch McConnell, President Barack Obama immediately signed the legislation. While he and others in the government and business community lauded the new act and its potential for greater oversight and transparency, the reality remains to be seen.

The Origins of the Act

Most people associate the Patriot Act with the events of 9/11. In actuality, many of the ideas contained in the act had been debated for years but had not won the necessary support. The Patriot Act was actually the result of a compromise over another proposed bill known as the Anti-terrorism Act. Nevertheless, while the events of 9/11 did not necessarily spawn the ideas for the Patriot Act, they did serve as the catalyst to convince lawmakers that a law of that type was at last needed to prevent any further attacks.

However, how they came to this decision and how it was passed has only added fuel to the fire of those who find it controversial and even illegal. The law was originally introduced to congress by Ashcroft, who gave congress a week to pass the bill or risk the consequences of another attack. Members in both houses attempted to make changes to the law, but most were scrapped in order to meet the deadline. Certainly no one wanted to be responsible for another terrorist attack against the United States due to idleness.

While the law itself has generated controversy, extending its provision has also led to extended debates. In 2009 when it was first up for review, certain provisions were set to expire, which led to a lengthy debate and even a delayed vote. In the end, though, President Obama reauthorized the act in 2010 for one more year.

The president had another opportunity the following year, in 2011, to refuse to authorize the act or at least to add amendments. One such amendment, suggested by Senator Patrick Leahy (D-VT), called for government oversight and transparency for how the act was used by the FBI. Leahy had actually been the one leading the charge for more oversight measures for the original act, too. Despite these attempts, the amendment was ignored once more and President Obama confirmed the act yet again.

An act this controversial and requiring so much support would seem to be a likely candidate for the legislative trash heap; however, even following the disclosure made by Edward Snowden about the NSA monitoring civilians’ phones, this law is still far from unpopular. In fact, the opposite is true. In light of the act expiring, CNN polled people across party lines to gather their opinions. According to that poll, 61 percent of people felt the law should have been renewed.

Additionally, while lawmakers in Washington did not agree that the Patriot Act as it was originally constructed should be renewed, they did agree that something similar was still needed to support America’s anti-terrorism efforts. In an odd coupling, Democrats and Tea-Party Republicans united to defeat the expiring Patriot Act and then pass its successor, the Freedom Act. While the Freedom Act was overwhelmingly passed, small groups on both sides held out. On one side were those in the old-guard of Republicans, such as McConnell and Senator John McCain (R-Ariz.), who felt the Patriot Act should have been renewed as it was. Conversely, some legislators such as Senator Rand Paul (R-Ky) wanted it scrapped altogether. Paul and his like-minded supporters viewed the whole program as an example of government overreach.

The public and congress therefore still view the Patriot Act and its successor as necessary and vital to national security, even after the Snowden revelations revealed that security is coming at a cost to everyone’s privacy.

The Patriot Act is an extremely controversial law, passed during a time of public terror in the wake of the greatest attack on the United States in the nation’s history. The law itself gave the American intelligence community widespread powers to spy on and investigate its own citizens, without discretion and often without reason.

After much public outcry, the most contested parts of the law were allowed to die off; however, its  successor the Freedom Act guarantees nearly the same all-encompassing powers for the intelligence community, while merely shifting the effort to compile data onto communications companies. All this, even in the face of revelations, that data compiled through the Patriot Act did not aid in any major terror investigation.

CNN: Six in Ten Back Renewal of NSA Data Collection

Business Insider: Obama’s Signature on the Freedom Act Reverses Security Policy That Has Been in Place Since 9/11

Michael Sliwinski
Michael Sliwinski (@MoneyMike4289) is a 2011 graduate of Ohio University in Athens with a Bachelor’s in History, as well as a 2014 graduate of the University of Georgia with a Master’s in International Policy. In his free time he enjoys writing, reading, and outdoor activites, particularly basketball. Contact Michael at staff@LawStreetMedia.com.
Share:
Related ItemsCourtDomestic SurveillanceEdward SnowdenFBIFISAFreedom ActNSAPatriot ActSurveillance