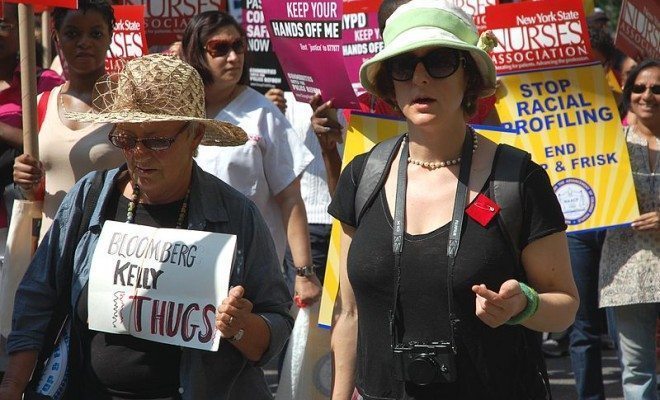 Stop and Frisk: Did Ending it Make a Difference?

Stop-and-frisk policies were one of the hottest topics in law enforcement in the last several years. The controversial New York policy made headlines, led to accusations of racial profiling and discrimination, and was the subject of multiple court cases. Now, the practice has basically been discontinued altogether. Read on to learn about stop-and-frisk policies, the arguments for and against them, and the progress we’ve made since.

What is Stop and Frisk?

Stop and Frisk is a situation in which a police officer detains a suspicious person and runs his hands lightly over the suspect’s outer garments in order to determine if that person is carrying a concealed weapon. If this “patting down” doesn’t alleviate the officer’s suspicion, he may also check the suspect’s pockets. Its constitutionality derives from the 1968 Supreme Court decision of Terry v. Ohio in which the Court ruled that it is constitutional under the Fourth Amendment; however, many criticize the stop-and-frisk practice for being a racial profiling tool, claiming that a disproportionate number of Blacks and Hispanics are subject to it.

On August 12, 2013, in Floyd v. City of New York, the Southern District Court of New York ruled that stop and frisk is unconstitutional under the Fourth Amendment as well as the equal protection clause of the Fourteenth Amendment. The decision was met with a lot of criticism and the Second Circuit Court of Appeals initially blocked and randomly reassigned the case in October 2013, stating that Judge Scheindlin, who wrote the majority opinion in August, “ran afoul” and had “compromised the appearance of impartiality surrounding this litigation.” More recently, the Court of Appeals failed to find any misconduct or ethical violation by Scheindlin and declined to reverse the decision. But it continued the stay on the ruling until the City of New York appealed it.

Why was it ruled unconstitutional in August 2013?

Activists in New York have been fighting stop and frisk for years. The August 2013 decision was based on a wealth of statistical data. Out of 4.4 million stops over the span of eight-and-a-half years, 52 percent of suspects were Black, 31 percent were Hispanic, and 10 percent were White (from a population of 23 percent Black, 29 percent Hispanic, and 33 percent White). Furthermore, in 23 to 24 percent of all stops with Black or Hispanic suspects, the police used force. Contrastingly, the police used force in 17 percent of all stops with White suspects. It was this evidence that prompted Scheindlin to write, “the policy encourages the targeting of young black and Hispanic men based on their prevalence in local crime complaints. This is a form of racial profiling.” Unlike former Mayor Bloomberg who strongly supported the practice, Mayor Bill de Blasio sharply criticized the policy during his campaign and promised to reform it. The public was outraged when the City of New York appealed the August 2013 decision.

What was the argument in favor of stop and frisk?

Supporters of stop and frisk believe in its efficacy for driving down crime. One of the most vocal supporters of the practice said that rules against stop and frisk “will make it harder for our police officers to protect New Yorkers and continue to drive down crime.” He argued that a disproportionate number of Blacks and Hispanics are stopped under this practice because a disproportionate number of them commit crimes. At least 10 out of 19 stops have been deemed justified. A report stated that gun shootings have increased by 2.3 percent between August and November 2013. The efficacy of this practice is further supported by a study that revealed that more than half of stops lead to guilty convictions, therefore keeping criminals off the street.

What’s the status of stop and frisk now?

Stop and frisk has pretty much been eliminated. According to data obtained by the New Republic, stop-and-frisk incidents have fallen by almost 80 percent during the first three quarters of 2014. More importantly, the seemingly apocalyptic scenario that many warned about if stop and frisk was discontinued didn’t happen. In August 2013, right when stop and frisk was ruled unconstitutional, New York City Police Commissioner Raymond W. Kelly said, “No question about it, violent crime will go up.” Bloomberg  agreed: “if you try to so much as reform stop and frisk…you’re playing politics with people’s lives.”

But crime hasn’t actually gone up–in fact, just the opposite. It’s decreased, the same way that it has been steadily decreasing over the last few decades nationwide. Despite no more stop and frisk, the streets of New York City are getting safer.

Stop and frisk does still happen, though it’s gone down a lot. There’s a Twitter account dedicated to memorializing all the times that stop-and-frisk incidents happen, @stopandfrisk. It’s still active, and it still chronicles incidences of stop and frisk being used on citizens.

Stop and frisk could have made some sense, in theory, but ended up being a more problematic program than it was worth, not to mention unconstitutional. It’s heartening to see that the crime rate has continued to fall, even with stop and frisk no longer being used.

MSNBC: African-American Teen Says Stop-and-Frisk Has Made Him Fear Police

ACLU: We Know That Stop-and-Frisk is All Kinds of Horrible: So Why is it Expanding Nationwide?

Huffington Post: Joe Lhota Says Only Some of Stop and Frisks Might Constitute Racial Profiling In NYC