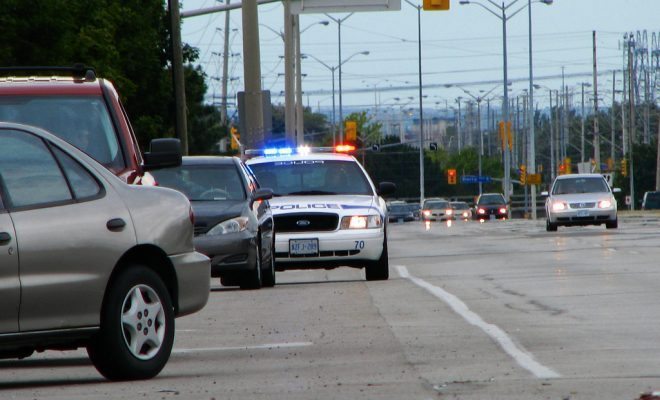 Police in the state of Oklahoma have recently brought the practice of civil asset forfeiture into the 21st century. Previously, if the police pulled you over, they could only seize assets that you physically had with you. But now, thanks to electronic scanners that can remove the funds from your pre-paid gift cards and your debit cards, they can seize even your electronic assets.

Many civil asset forfeiture cases are referred to as “highway interdiction” cases, so using that concept as an example would be helpful to understand how the process works. First, the police pull you over. Sometimes it is for a traffic violation that you have committed. In other instances, typically where civil asset forfeiture is being abused, these stops are part of a sweep of checkpoint stops. Once you are pulled over, a police officer questions you and may use a K-9 Unit to search for drugs or cash. Obviously, if they find drugs you’re getting arrested. However even if all they find is cash and they don’t arrest you (or even ticket you) they can confiscate the money.

Originally when the law that allows this–the Comprehensive Crime Control Act of 1984–was enacted, it was part of an increase in power given to law enforcement to fight the War On Drugs. Drug trafficking and other criminal activities that this law would help fight such as organized crime, deal with large amounts of cash; allowing the police to seize that cash can cripple criminal organizations. It also provides much needed budgetary windfalls to state, local and federal law enforcement agents who split the proceeds. This process, known as equitable sharing, gives law enforcement officials an incentive to confiscate assets.

They don’t, at this point in the process, have to demonstrate that the money they took had anything to do with an illegal activity. And because it is a civil, not a criminal, matter, the burden of proof that the money is innocent falls on the owner, not on the police, if the case gets to trial.

Many of these cases go uncontested because the owners of the seized assets feel it would take more time, effort, and expense than the assets are worth to pursue the matter. Since they would have to hire attorneys to help them, they are probably right. According to the Washington Post, only one-sixth of the seizures were challenged in court. However, of the cases that were challenged, 41 percent resulted in the government returning the money.

And it is a lot of money. According to the Washington Post investigation, it totals over $2.5 billion in total since September 2001. Of that, $1.7 billion was split between state and local authorities and $800 million between the Department of Homeland Security and other federal agencies In many cases, these seizures aren’t windfalls (although John Oliver did reveal that in some cases they represent a very literal slush fund) but are actually planned into the budget. This means that when creating their budgets, police departments are planning on seizing a certain percentage of the money they need. This gives the police even more of an incentive to seize assets–particularly from out of state motorists who are probably less likely to contest the seizure or create negative political consequences.

In the video below, the Institute for Justice, a libertarian public-interest law firm, explains some of the concerns with civil asset forfeiture and just how much money is involved. It also highlights the difference between civil and criminal forfeiture.

The proportion of forfeitures that are civil versus criminal is an important point that needs to be addressed. As explained, criminal forfeiture requires that the government prove that you actually committed a crime. Most would agree that we don’t want criminals to be able to keep the profits from their illegal activity and, once those assets are legally seized, they should be used for some constructive social purpose. But only 13 percent of forfeitures were criminal. That means that for every 100 people who had their assets seized, 87 of them were never convicted of a crime but their assets were taken anyway.

The video also more thoroughly explains how the process of equitable sharing allows law enforcement in states that have curtailed the practice of civil asset forfeiture to do an end-run around those restrictions. They turn over the assets that they seized to the federal government, which then takes 20 percent, and then returns the remaining 80 percent back to the state or local police department.

What Law Enforcement Has to Say

Some, of course, argue that civil asset forfeiture is a necessary tool for law enforcement officials. It gives them flexibility and power to seize money that they believe is being used to further criminal activity. Additionally, these law enforcement agencies need the money to fund their operating budgets. If we eliminated this as a source of revenue for agencies we would need to either cut funding, which could be dangerous as well as politically unpopular, or find the money somewhere else, which could also be difficult and politically unpopular. There are mechanisms to get assets back that have been wrongfully seized, so the real problem isn’t necessarily civil asset forfeiture itself but the fact that innocent parties don’t avail themselves of the process to recover their money.

Other police officers would argue differently. In this video, two former law enforcement officers who are involved in LEAP, Law Enforcement Against Prohibition, argue that civil asset forfeiture creates a system that encourages corruption and theft by the government.

The argument that these agencies need the funds to operate is flipped here. It is precisely because these agencies need the money to operate, that allowing civil asset forfeiture is so dangerous. Seizures are incentivized for these agencies. And since they don’t require proof of wrongdoing, and the likelihood of being contested is so small, there is no effective counter-incentive to keep the police from unfairly seizing assets. In fact, these agencies sometimes want to get better at making these stops and seizures. The companies BlackAsphalt and the 4:20 Group train law enforcement to make successful “highway interdiction” stops.

The question then becomes how do we give law enforcement the tools that they need to safely and effectively do their jobs while at the same time protecting citizens from government overreach? One possible solution is to completely eliminate civil asset forfeiture and only allow the criminal variety. This is an attractive option because the incentives for the police to seize assets wouldn’t be the main incentive at work. In civil asset forfeiture, they are able to take assets without proving, or even charging, someone with a crime so their only incentive is to seize assets. In contrast, criminal asset forfeiture requires a criminal conviction, so the first step in the process requires police to legally charge and convict an actual criminal. Their incentive, first and foremost, is to fight crime. The assets they get to keep, if successful, are a bonus.

Another potential solution is to decouple the financial incentive from civil asset forfeiture by funneling any assets seized to something totally separate from the police department or even law enforcement. For example, instead of the money going to the police department (or to the federal government and the local police through equitable sharing) the money could be sent to the local school district. This would allow the practice to continue but would help to reduce the direct payoff that police officers have when they seize assets, which in turn could reduce the number of stops they make. Local governments would have to ensure that the school budget money wasn’t then just reduced and given to the police to decrease the incentive to take assets. But if carefully structured, this could allow civil asset forfeiture to exist in the rare instances where it may be legitimate, but lessen the incentive to prevent abuse.

A third option, and one that the House Judiciary Committee believes will cure many of these ills, is the Deterring Undue Enforcement by Protecting Rights of Citizens From Excessive Searches and Seizures Act of 2016, or DUE PROCESS Act. It is supported by a variety of organizations, including the ACLU, and would greatly reform the civil asset forfeiture process.

Most of the proposed reforms focus not on the initial seizure of the assets but on the court process to reclaim them when they have been seized. The DUE PROCESS Act would alter the burden of proof in these cases, placing it with the government instead of the claimant. It would create a right to counsel and allow a claimant to recover attorney’s fees if successful. Since cost is one of the most significant obstacles to people who want to contest the forfeiture of their assets, this would increase the costs associated with wrongfully taking assets. It would also require that there be a proven connection between the property and the offense committed. While it wouldn’t fully eliminating civil asset forfeiture (you still wouldn’t need a criminal conviction to have your property taken) it would make it much more like criminal asset forfeiture in our legal system. All of these reforms would help to reduce police incentives and ability to seize assets while also encouraging people who have a valid case to pursue it in court.

We can and should give law enforcement a variety of ways to fight crime. Civil asset forfeiture is a powerful tool that law enforcement naturally has used to their benefit. But they have not only used it against convicted criminals, who make up a scant 13 percent of those who had their assets seized by the police, but also against ordinary citizens. Some of whom may have committed a civil offense, and many of whom were doing nothing more than driving with cash.

Reforms to civil asset forfeiture, either to eliminate it all together or to alter the balance of power in the relationship between citizens and the police, are necessary to ensure that this tool is no longer abused. But until it is reformed, when driving in Oklahoma you may want to use Bitcoin.

The Register: Oooooklahoma! Where The Cops Can Stop And Empty Your Bank Cards–On Just a Hunch

Institute For Justice: Policing For Profit

The Future of Freedom Foundation: How Police Confiscation is Destroying America

The Heritage Foundation:Civil Asset Forfeiture: 7 Things You Should Know

The Washington Post: Stop and Seize : Aggressive Police Take Hundreds Of Millions Of Dollars From Motorists Not Charged With Crimes

Mary Kate Leahy
Mary Kate Leahy (@marykate_leahy) has a J.D. from William and Mary and a Bachelor’s in Political Science from Manhattanville College. She is also a proud graduate of Woodlands Academy of the Sacred Heart. She enjoys spending her time with her kuvasz, Finn, and tackling a never-ending list of projects. Contact Mary Kate at staff@LawStreetMedia.com
Share:
Related ItemsCivil Asset ForfeitureCriminal Asset ForfeiturePoliceTraffic Stops