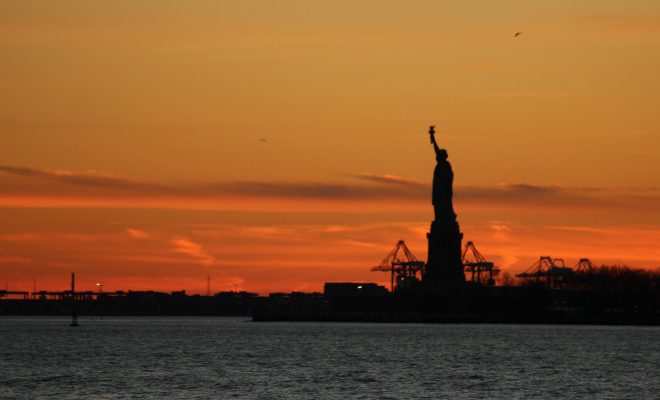 Before the Ban: The History of U.S. Immigration Policy

President Donald Trump recently issued a revised travel ban temporarily preventing people from six countries and all refugees from entering the United States. The original ban was immediately met with condemnation, protest, and legal action, leading the administration to change course. The revised version amounts to a significant scaling back relative to the original, but many of the longer term consequences remain the same. While this is the most recent and perhaps one of the most chaotic efforts to control who comes into the United States, it is far from the first. The history of U.S. immigration policy is littered with restrictions, quotas, and preferences for certain groups. Read on further to find out how President Trump’s executive action fits in the long lexicon of American immigration policy.

The United States is and has been a land of immigrants long before it was even a country. European migration began in the 16th century, first with the French and Spanish then later with the English, who founded their first permanent colony in Jamestown in 1607. Many of the earliest European settlers traveled either to avoid religious persecution in their native land or to seek better opportunities. There was also a dark side to this original mass migration. Many white Europeans arrived as indentured servants and even more black slaves were forcibly removed from Africa and brought to the new world.

At the end of the 19th century and into the early 20th century, the demographics of immigration shifted again. During this period there was a large rise in immigration from Southern and Eastern Europe. This was most clearly characterized by the nearly four million Italians who entered the United States. Following this wave, however, immigration slowed dramatically due to international events such as World War I and II, as well as the Great Depression. After World War II, refugees from Europe and the Soviet Union flocked to the U.S., along with those from Cuba following Castro’s rise. The video below from Business Insider provides a good illustration of where immigrants came from and when they arrived in the United States:

The History of Immigration Restrictions

For almost as long as people have been migrating to the United States, policymakers have enacted a variety of different pieces of legislation to restrict immigration in general and for specific groups of people. First was the Naturalization Act of 1790, which made only free white people of good moral character who have lived in the U.S. for at least two years eligible for naturalization. This requirement was later changed to 14 years of residency and eventually back down to five years, due to political reasons. Another restriction was put in place in 1819 when Congress started requiring ship captains to provide a list of any foreign-born people onboard intending to immigrate.

Immigration restrictions did not really intensify until after 1850, which was the first time the U.S. Census asked what country people came from. This was followed by a dramatic increase in migration restrictions, particularly those targeting people from Asia. In 1862 the “Anti-Coolie” Act was passed with the aim of preventing Chinese immigration to California and forced California businesses that hired Chinese workers to pay an additional tax. There was also the Naturalization Act of 1870, which made free white people and “persons of African descent” and “nativity” eligible for naturalization but excluded Asians. Perhaps the most infamous example was the Chinese Exclusion Act passed in 1882, which barred all Chinese immigration for 10 years. This act was extended in 1892 by the Geary Act for 10 more years and then again indefinitely in 1902.

These restrictive measures extended into the 20th century as well, starting with the 1907 gentlemen’s agreement with Japan, where Japan agreed to discourage Japanese migration to the U.S. in exchange for more protections for Japanese people already in the U.S. There were additional restrictions at the state level as well, including in 1913 when California passed the Alien Land Law preventing Chinese and Japanese nationals from owning land. In 1917 Congress went a step further, banning immigration from many Asian countries with notable exceptions being Japan and the Philippines.

Another major immigration policy shift occurred in 1921 when the first of the Quota Acts was enacted. The law placed immigration quotas on countries to restrict the number of people from a certain country to three percent of the number that lived in the United States after the 1910 census. A similar act was passed in 1924 limiting the number of migrants from Eastern and Southern Europe to two percent of the 1890 levels. The adoption of the National Origins Formula delivered the final blow, completely banning immigration from Asia, while still allowing immigration from the Western Hemisphere.

It did not end with Asian immigrants either, as the Oriental Exclusion Act prohibited most immigration from Asia but also included foreign-born wives and the children of American citizens of Chinese ancestry. The Expatriation Act went even further, stating that an American woman who marries a foreign national loses her citizenship; this was partially repealed in 1922 but still held for women marrying Asian citizens. Even the Supreme Court entered the debate over race and citizenship in the case United States v. Bhagat Singh Thind. The court ruled that a caucasian man from India did not meet the definition of white person used in established immigration law, and therefore could not become a citizen.

In addition to people from Asia, other groups were also barred over the years for reasons that were not explicitly related to race or ethnicity. The Immigration Act of 1882, for example, put a $0.50 charge on people immigrating and forbid lunatics and those likely to become dependent on the state. The Alien Contract Labor Law was passed in 1885 to prohibit bringing foreign contract laborers to the country, except for certain industries. In 1891 Congress made polygamists, people with diseases, and those convicted of specific misdemeanors also ineligible for immigration. Political groups were also targeted–following the assassination of President William McKinley, Congress passed the Anarchist Exclusion Act in 1901 barring anarchists and political extremists.

Along with all these outright restrictions were a host of other measures to simply make the immigration process harder–like literacy tests on citizenship applications and additional agencies set up to oversee immigration–that, while not explicitly forbidding it, significantly hindered immigration for many groups. It was not until 1965 when Congress passed the Immigration and Nationality Act that many of the quotas and restrictions were finally eliminated.

The video below gives an overview of the immigration practices of the United States:

Immigrants in the U.S. Today

The immigrant population rose from 9.6 million in 1970 to the 43.3 million here today. Over that time, the primary source of immigrants has shifted from Europe to Latin America and Asia. Specifically, in 2015 the top five countries of origin for new immigrants were: India, China, Mexico, the Philippines, and Canada. The 2015 numbers generally reflect the leading countries of origin for the total foreign-born population as well, which are led by Mexico, India, China, and the Philippines.

The immigrant population in the United States skews slightly female, at a little more than 50 percent. It is also older than the general U.S. population with a median age of 43.5 years. Demographically, nearly half of immigrants identify themselves as white, a little more than a quarter identify as Asian, and about 9 percent identify themselves as black. Ethnically, Hispanics and latinos are the largest group of immigrants, representing about 45 percent. In terms of education, the percentage of immigrants with at least a bachelor’s degree is almost the same as the national average, at about 30 percent. And geographically, states that border Mexico or have large population centers tend to have the most immigrants, with California leading the way followed by New York, Texas, Florida, and New Jersey.

Immigration and the Economy

From 2009 to 2011, the amount of money earned by immigrants was nearly 15 percent percent of all U.S. wages, although immigrants make up 13 percent of the overall population. Immigrants are more likely to be prime working age and work in higher proportions relative to their share of the population. Immigrants also own nearly one-fifth of all small businesses. Finally, nearly half of all immigrants work in white collar jobs and are often overrepresented in some middle-class occupations such as nursing.

While immigrants are working in disproportionately high numbers, they also generally do not harm the work opportunities for most native-born Americans either. While immigration’s effects on domestic workers is a hotly debated subject, many economists agree that it provides an overall economic benefit, although it could also have significant economic consequences for certain groups. In the long-run, immigrants can actually be beneficial to the American job market overall. Moreover, when immigrants drive wages down, it is often because they lack the protections that American citizens have and thus are susceptible to exploitation.

Aside from economic impacts, immigrants also affect American society in other positive ways. These include introducing new or different foods and cooking styles, presenting alternative forms of spirituality, and even incorporating non-traditional medical treatments.

The words inscribed at the foot of the Statue of Liberty in New York read, “Give me your tired, your poor, your huddled masses yearning to breathe free, the wretched refuse of your teeming shore.” These inspiring words, originally written by the poet Emma Lazarus, perfectly encapsulate the ideals that many speak of when they refer to the United States as a nation of immigrants. However, for much of the nation’s history, the people and practices of this country have failed to live up to that ideal.

Donald Trump’s ban, while definitely not the first, is the latest in a long line of efforts to restrict immigration from certain areas and for certain groups of people. Although these restrictions are often passed under the guise of being in the best interest of America or its citizens, they can have the opposite effect. This is because immigrants are often willing to do many of the jobs native born citizens will not, at lower wages. Despite the United States’ complicated history, immigrants have continuously added to and enriched American culture.

Michael Sliwinski
Michael Sliwinski (@MoneyMike4289) is a 2011 graduate of Ohio University in Athens with a Bachelor’s in History, as well as a 2014 graduate of the University of Georgia with a Master’s in International Policy. In his free time he enjoys writing, reading, and outdoor activites, particularly basketball. Contact Michael at staff@LawStreetMedia.com.
Share:
Related ItemsHistoryImmigrationImmigration BanImmigration LawsImmigration Policy