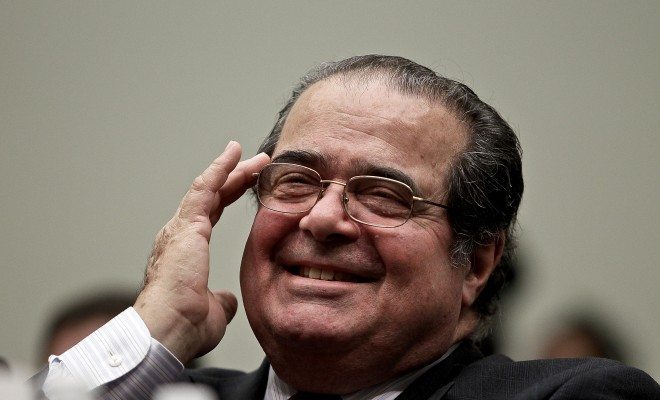 What Does Antonin Scalia’s Death Mean for the Supreme Court?

The world was rocked by the death of 79-year-old Justice Antonin Scalia on Saturday, February 13, 2016. Scalia, the longest-serving justice on the current bench, was appointed by President Ronald Reagan on June 17, 1986 following the resignation of Chief Justice Warren E. Burger. His three decades on the Court have proven to be legendary and exceptionally influential in the interpretation of law and the Constitution. Even his passing has, fittingly, sparked a constitutionally-based showdown of governmental powers and the appointment of a new justice. Read on to learn more about Justice Scalia’s influential and legendary service to the Court and the politically fused debate regarding the appointment of a new Supreme Court Justice.

Who Was Antonin Scalia?

Justice Antonin Scalia was a conservative originalist powerhouse within the Supreme Court who unapologetically defended the Founding Fathers’ intent and precise wording of the Constitution to his last day. His interpretation was fully vested in originalism, an ideology that deems the Constitution a dead document–one inflexible and unchanging to the environment and developments of the world in which it was created.

Scalia was a master in crafting polarizing opinions which were widely criticized by many and revered by others. His stances on women, abortion, and minorities made him an unfavorable justice among Democrats particularly. His protection for privacy highlighted his commitment to the Constitution. Yet, his ability to artfully and logically decipher complex analyses in a nuanced manner was an undeniable talent; Chief Justice John Roberts dubbed Scalia a “leader of the conservative intellectual renaissance.“

Noteworthy Cases: A Legacy Through Opinion and Text

Here is just a sampling of the many noteworthy cases that define Scalia’s time on the court:

Justice Scalia delivered the majority opinion for District of Columbia v. Heller in 2008 in a step-by-step breakdown of the operative clause in the Second Amendment, concluding the right to bear arms extended to the people of the United States beyond the context of “militia” as cited in the Second Amendment. Scalia’s opinion further developed the limitations of the right to bear arms, drawing from a historical context and English implementation. He stated,

Scalia led a crusade for the protection of privacy. Justice Scalia’s 2001 opinion in Kyllo v. United States set a clear limitation on police intrusion. In a 5-4 ruling, police were barred from utilizing thermal-imaging devices to explore the insides of a private home otherwise unknown without physical intrusion as a protection of the Fourth Amendment and unreasonable searches without the requisite warrant. The use of thermal-imaging was deemed to be an “intrusion into a constitutionally protected area.”

Scalia’s conclusion in Florida v. Jardines further cemented the Fourth Amendment definition of a search by finding that the use of a drug-sniffing dog on private property was considered a search and therefore, required a warrant. In 2013, when the Maryland v. King decision granted police the ability to collect and analyze DNA samples from individuals arrested for but not yet convicted of crimes, Justice Scalia delivered a fierce dissent. He stated:

[N]o matter the degree of invasiveness, suspicionless searches are never allowed if their principal end is ordinary crime-solving. A search incident to arrest either serves other ends (such as officer safety, in a search for weapons) or is not suspicionless (as when there is reason to believe the arrestee possesses evidence relevant to the crime of arrest).

He was joined by Justice Ginsburg, Justice Sotomayor, and Justice Kagan in his dissent. Most recently, Justice Scalia supported the decision in Rodriguez v. United States, which extended Fourth Amendment protections for motorists detained for an extended period of time to allow police to conduct a dog-sniff without reasonable suspicion. Such police conduct was found to be in violation of the Fourth Amendment.

Justice Scalia was widely criticized for his conservative  stance on a variety of large-scale issues facing a more progressive America. His dissents regarding LGBTQ rights were particularly controversial. These range from his dissent in United States v. Windsor to his dissent in Lawrence v. Texas in which he stated that the Court had “largely signed on to the so-called homosexual agenda, by which I mean the agenda promoted by some homosexual activists directed at eliminating the moral opprobrium that has traditionally attached to homosexual conduct” when the majority invalidated Texas’ same-sex sodomy ban. In his vehement opposition, Justice Scalia compared homosexuals to drug dealers, prostitutes, and animal abusers, garnering him significant criticism.

Justice Scalia continuously criticized the bench on abortion jurisprudence, and stated, in Hodgson v. Minnesota, “I continue to dissent from this enterprise of devising an Abortion Code, and from the illusion that we have authority to do so.”

In 1992, his partial dissent in Planned Parenthood of Southeastern Pennsylvania v. Casey reinforced his stance:

That is, quite simply, the issue in this case: not whether the power of a woman to abort her unborn child is a ‘liberty’ in the absolute sense; or even whether it is a liberty of great importance to many women. Of course it is both. The issue is whether it is a liberty protected by the Constitution of the United States. I am sure it is not. I reach that conclusion not because of anything so exalted as my views concerning the ‘concept of existence, of meaning, of the universe, and of the mystery of human life.’ Rather, I reach it for the same reason I reach the conclusion that bigamy is not constitutionally protected–because of two simple facts: (1) the Constitution says absolutely nothing about it, and (2) the longstanding traditions of American society have permitted it to be legally proscribe.

After three decades of service, one thing remains starkly clear–Justice Scalia remained dedicated to and bound by the words of the Constitution and what he viewed as the intent of its writers. His stances, often argumentative and unforgiving, remained unwaivering.

Before Justice Scalia’s passing could properly be mourned, the American public was reminded of the extremely high stakes in the 2016 election as Republicans took to the streets in an effort to prevent President Obama from nominating a justice to fill the current vacancy on the bench. Just thirty minutes after the news of Scalia’s death broke, Ted Cruz took to his Twitter and posted to say: “Justice Scalia was an American hero. We owe it to him, & the Nation, for the Senate to ensure that the next President names his replacement.”

A variety of reasons have been stated for the opposition to nominate Justice Scalia’s replacement. Senator Rand Paul weighed in, finding that a conflict of interest would exist if President Obama made a nomination as he has too many of his own policies before the Court. Conn Caroll, communications director for Utah Republican Mike Lee stated, “What is less than zero? The chances of Obama successfully appointing a Supreme Court Justice to replace Scalia?” Donald Trump called for the Senate to “delay, delay, delay” and Ted Cruz stated, “the Senate needs to stand strong.” Ohio Governor John Kasich reminded the world, “I just wish we hadn’t run so fast into politics.”

However, Democrats fired back by pointing out that it is written in Article II, Section 2 of the Constitution that the President “shall nominate, and by and with the Advice and Consent of the Senate, shall appoint…Judges of the Supreme Court.”

Hillary Clinton commented: “It is outrageous that Republicans in the Senate and on the campaign trail have already pledged to block any replacement that President Obama nominates.” Further reminding the public that President Obama remains in office until January 20, 2017 and has a duty to continue filling his obligations as Commander in Chief. Senator Elizabeth Warren demolished naysayers with the following statement that went viral:

The sudden death of Justice Scalia creates an immediate vacancy on the most important court in the United States. Senator McConnell is right that the American people should have a voice in the selection of the next Supreme Court justice. In fact, they did — when President Obama won the 2012 election by five million votes. Article II Section 2 of the Constitution says the President of the United States nominates justices to the Supreme Court, with the advice and consent of the Senate. I can’t find a clause that says “…except when there’s a year left in the term of a Democratic President.” Senate Republicans took an oath just like Senate Democrats did. Abandoning the duties they swore to uphold would threaten both the Constitution and our democracy itself. It would also prove that all the Republican talk about loving the Constitution is just that — empty talk.

While it is unclear how the battle between President Obama and the Senate will play out, it is important to note the Senate has never taken more than 125 days to confirm a Presidential Supreme Court nominee. At the time of Justice Scalia’s passing, President Obama still had 342 days left in his term. Since 1900, eight individuals were nominated during election year, six were confirmed. With that said, there is still plenty of time for President Obama to nominate a Supreme Court Justice and for the Senate to confirm–we will just have to wait and see how this constitutional showdown plays out.

Slate: Antonin Scalia Will Be Remembered As One of the Greats

Grassfire: Remembering a Titan: The Legacy of Justice Antonin Scalia

Atlanta Journal-Constitution: Antonin Scalia: 5 of His Most Famous Decisions

Think Progress: It’s a “Conflict of Interest” for Obama to Nominate a Supreme Court Justice

Ajla Glavasevic
Ajla Glavasevic is a first-generation Bosnian full of spunk, sass, and humor. She graduated from SUNY Buffalo with a Bachelor of Science in Finance and received her J.D. from the University of Cincinnati College of Law. Ajla is currently a licensed attorney in Pennsylvania and when she isn’t lawyering and writing, the former Team USA Women’s Bobsled athlete (2014-2015 National Team) likes to stay active and travel. Contact Ajla at Staff@LawStreetMedia.com.
Share:
Related ItemsAppointmentConstitutionDonald TrumpElection YearElizabeth WarrenHillary ClintonJustice Antonin ScaliaOriginalismPresident ObamaSCOTUSTed Cruz