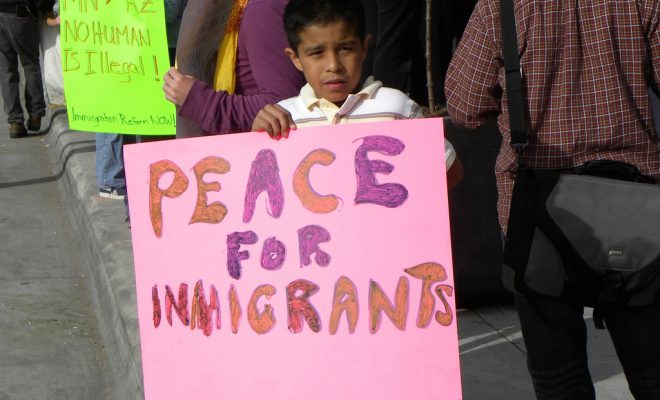 A history of inadequate immigration policies paired with the notion of the “American Dream” creates an interesting paradox for the role of immigrants in American society. Growing pressure from immigrants’ rights advocates and the overall changes in immigration policies initiated by the Obama Administration have prompted a debate on how to deal with growing numbers of undocumented immigrants. Are current deportation policies a part of the solution or are they the problem themselves? Read on to learn more about deportation practices in the United States.

Deportation can be broadly defined as an order to leave a country. Deportation in the United States is carried out in two ways: removals and returns.

A removal is an official judicial or administrative order to leave the country, and is a formal legal process. If a person is removed from the country, he is barred from legally entering the country for a certain or indefinite period of time. Appearance in front of an immigration judge or an officer is often a part of the removal procedure. An order of removal becomes a part of the individual’s permanent record. U.S. Immigration and Customs Enforcement is the agency responsible for removal proceedings.

On the contrary, return is a more informal mechanism of deportation. It’s essentially a turn around at the border without any paperwork or formal procedure. In this way, being “returned” doesn’t result in any legal consequences and these individuals are not necessarily barred from re-entering the country in the future. U.S. Customs and Border Protection apprehends people at the border, and can carry out either removal or return proceedings.

While removals can be carried out anywhere in the country or at the border, returns are only applicable to individuals trying to cross the border or people who were caught in close proximity to it.

What laws govern deportation practices in the U.S.?

Even though the United States emerged as an immigrant country, regulating immigration has been a long-standing policy of the U.S. government. Race and ethnicity have long played a crucial role in policy decisions concerning immigration. Virtually all ethnic groups have suffered the consequences of racially motivated policies of exclusion. For example, Chinese immigrants were marginalized and constantly targeted for deportation throughout the early history of the United States.

More recent policies and practices pertaining to deportation focus on so-called “smart enforcement,” which emphasizes deportations of those with criminal convictions or ties to terrorist organizations. This strategy is rooted in close cooperation between immigration and border patrol forces, the FBI, and local law enforcement agencies.

In 1994, Congress passed the Violent Crime Control and Law Enforcement Act. Not only did it expand penalties for unauthorized re-entry after deportation, but for myriads of other immigration-related crimes.

In 1996, the Antiterrorism and Effective Death Penalty Act (AEDPA) was signed into law. It authorized mandatory deportations for undocumented immigrants who had criminal convictions, even non-violent ones. The definition of “aggravated felony” in immigration law was expanded to include tax evasion, failure to appear in court, and even receipt of stolen property. In addition, this law created special procedures for those accused of terrorist charges, including limiting their habeas corpus protections.

Section 287 (g) of the Immigration and Nationality Act was also enacted back in 1996. It allowed law-enforcement agencies to perform the functions of federal immigration agents by deputizing local police officers. In recent years, the implementation of the 287 (g) initiative was widely criticized for its lack of federal oversight, racial profiling practices, and draining of valuable resources that could have been used instead to investigate crimes.

During the past several administrations, deportation policies have shifted toward a focus on border security and apprehension of undocumented immigrants who have committed crimes. In this way, immigration policies have become more closely associated with criminal enforcement.

How many people are being deported?

By some estimations, since President Obama took office more than two million people were deported, prompting discontent from immigrant advocate groups. However, even though deportation numbers went up during Obama’s presidency, most of the increase in official figures stems from shifting policies.

How do we count deportations?

During the second term of George W. Bush’s administration, more people were formally removed than simply turned around at the border through the previously discussed Consequence Delivery System. When Obama became  president, he continued to follow the already-in-place practices of treating many returns as removals, resulting in the overall increased numbers of deportees. Before, immigrants who were caught at the border were simply sent back to where they came from, without legal consequences. Now, they are more likely to be apprehended, prosecuted, and issued a deportation order. As a result, deportations that would previously be classified as returns are now officially counted as removals.

Return recordkeeping tended to be more informal. In most instances, people who were simply turned around at the border would not be counted in the official statistics. As a result, the total number of those deported seems higher now, but in the reality it’s hard to say how many people were returned and not counted in the official statistics before Bush started this trend. Between 2009 and 2012, the number of returns and removals were roughly the same, 1.6 million each; however, in 2013, 64 percent of removals were carried out at the border, signifying a 28 percent increase from 2008. Simultaneously, the number of people apprehended in the interior of the country dropped to 36 percent in 2013.

It’s clear that arrests at the border constitute a significant proportion of the overall deportations, while undocumented immigrants who have already been living in the United States are given less priority.

How are deportations are carried out?

Formal deportations are usually carried out only after a person appears before an immigration judge. However, during the last couple of years judicial proceedings were outpaced by expedited removals and other similar practices. In 2013, 83 percent of deportations were executed without judicial review. Moreover, 44 percent were fast-track removals and 40 percent were reinstatements of orders that were not previously carried out. During the same year, only 17 percent of deportations were carried out through judicial order, compared with 36 percent in 2011.

The video below looks at the life of one undocumented immigrant who was deported through reinstatement of previous order of removal after living in the United States for more than 20 years. He left behind a wife and five American children.

Who is being deported?

The Obama Administration reiterated that it would target immigrants who committed crimes for deportation. Consequently, from 2009 to 2013 the numbers of deported immigrants with criminal convictions went up 54.6 percent. In 2013, 85 percent of deportees had been previously convicted of felonies or at least three misdemeanors.

However, in 2013, 60 percent of those who had a criminal record and were removed from the country, had only minor non-violent convictions, punishable by less than a year in prison. Since President Obama took office, only 20 percent of all deportees were convicted of serious crimes, including drug-related offenses. In 2012, less then one percent of those deported were charged and convicted with homicide.

Many of those who are deported have American-born children. It is estimated that in 2013, 72,000 parents with U.S.-born children were deported. In total, there are around 3.5 million undocumented immigrants who have a U.S. citizen child.

As a consequence, many U.S.-born children whose parents are being detained or deported enter the foster care system. Watch the video below to learn more about the growing share of such children in foster care.

In 2013, Mexico, Guatemala, Honduras, and El Salvador were the top countries of origin for deportees. During the same year, 72 percent of all deportees were from Mexico, with many apprehended at the border.

Meanwhile, immigrants from the Middle East, Africa, and Asia are more often expelled from the country after being suspected of having ties with terrorist groups outside the United States. From 2003 to 2012, 60,000 from Muslim countries in the above regions were deported from the United States.

What are the issues with current deportation policies?

The costs of immigration enforcement and deportation proceedings are enormous. In 2010, $600 million was allocated to add border patrol agents and new surveillance technology. In 1993 the annual budget of Customs and Border Protections (CBP) was only $363 million, while in 2013 it reached $11.9 billion. Immigration and Customs Enforcement (ICE) costs taxpayers $5.9 billion as of 2013, while Enforcement and Removal Operations (ERO) expenses amounted to $2.9 billion in 2012.

In addition, treating returns as removals is not only costly but results in serious legal consequences for undocumented immigrants. Those immigrants may never again have the chance to re-enter the country, even if it’s years later.

What is being done about deportation?

The current administration passed Deferred Action for Childhood Arrivals (DACA) in 2012, which allowed undocumented immigrants who entered the country before they turned 16 years old and before June 2007 to apply for a renewable two-year work permit and avoid deportation. Since 2012, 580,946 undocumented immigrants have benefited from DACA.

In 2013, the  Obama Administration pushed for another law, the Border Security, Economic Opportunity, and Immigration Modernization Act (S. 744). Among other things, the bill would allow undocumented immigrants–if they meet eligibility requirements–to apply for registered provisional immigration programs (RPI). RPIs are six-year programs that allow all those eligible to avoid deportation and receive work permits. In ten years, immigrants with RPI status would be able to apply for permanent residency. Eventually they could become citizens of the United States. While this bill did not pass, it’s another example of the changes that some are hoping to see to America’s immigration policies.

By the lowest estimations, there are around ten million undocumented immigrants in the United States. Deportations cannot be the only meaningful solution as the numbers are too high and the issue is too complex for such a simple approach as mass removals. The current administration has already taken the first steps to reduce deportations and provide permanent solutions for millions of undocumented immigrants. However, the criminal justice approach to immigration should be re-evaluated as it has been long proven that there is no relationship between immigration and crime. What will be done to fix the problem of the many undocumented immigrants in the U.S. is yet to be seen.

U.S. Congress: The Antiterrorism and Effective Death Penalty Act of 1996

Immigration Policy Center: The Growth of the U.S.Deportation Machine

Nation: Why Has President Obama Deported More Immigrants Than Any President in U.S. History?

The New York Times: Deportation Up in 2013; Border Sites Were Focus