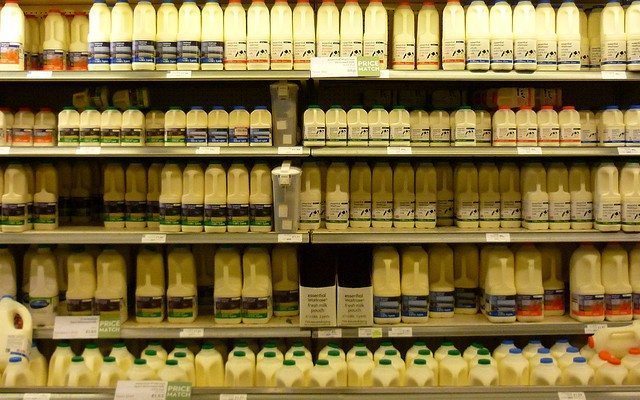 What’s the Deal With Raw Milk?

Move over marijuana, there’s a new form of contraband in town.

Not just any milk, but raw milk, which is simply milk that hasn’t been pasteurized or heated to a temperature that kills illness-causing bacteria. It’s illegal to sell raw milk directly to consumers in about half of the United States. It’s also illegal to distribute raw milk packaged for consumption across state lines. Still, raw milk advocates stand up for their right to consume it. For example, protesters from a private buying club, Grassfed on the Hill, milked a cow on the Capitol lawn back in 2011 to protest the Food and Drug Administration’s action against a Pennsylvania farmer accused of selling raw milk across state lines.

Raw milk proponents say pasteurization kills flavor, nutritional benefits, and beneficial bacteria in addition to killing the harmful bacteria that it’s supposed to eradicate. Opponents say there’s simply no proof that raw milk has any benefits that pasteurized milk can’t confer, and that drinking it isn’t worth the health risk as it contains potentially dangerous bacteria. Both sides stand firm, creating controversy around one of America’s most wholesome and common commodities.

If you haven’t heard anything about raw milk yet, chances are you will. Warnings from regulatory and public health agencies are increasing, raw milk crusaders are banding together, and politicians are jumping on board to take a stand. As early as 2012, Ron Paul was using the topic of raw milk to rally a Wisconsin crowd, as seen in the video below.

Here’s what you need to know about the raw milk debate before it escalates to a full scale food fight.

Why do we pasteurize milk in the first place?

To understand the raw milk controversy, you need some background on pasteurization and why we do it in the first place.

Before milk makes its way to a carton, it starts in a cow’s udders, which are basically saggy mammary glands. (Yuck.) Like other bodily fluids, the milk produced in these glands contains bacteria, both good and bad. Unlike many other farm foods, milk isn’t usually cooked before consumption. Since cooking kills pathogens, many people ended up drinking a cocktail of bacterial specimens before pasteurization was invented.  In the early 1800s, illnesses like tuberculosis, scarlet fever, and typhoid fever were often transmitted through milk because of the unclean dairy practices common at the time.

Luckily for the American dairy industry, the French love their wine. They love it so much that Emperor Napoleon III gave a scientist by the name of Louis Pasteur the noble task of stopping wine spoilage. Pasteur soon became famous for nuancing a process that would keep wine from spoiling without changing its flavor. It involved heating the liquid to the right temperature for the right amount of time to destroy spoilage bacteria. He called it pasteurization.

Pasteurization was applied to dairy in the late 1800s, and incidence of disease caused by milk decreased drastically. At first it was only used for dairy farmed in unsafe conditions, but soon it was leveraged to reduce risk of illness for nearly all dairies. From there, pasteurization grew to dominate the dairy industry.

What are the laws regarding raw milk?

Although individual states have always regulated their own dairy processing, the Standard Milk Ordinance, now called the Grade A Pasteurized Milk Ordinance (PMO), was implemented in 1924 to help each state meet certain standardized quality recommendations to ensure public safety.

Raw milk didn’t become a truly legal issue until the 1980s when Public Citizen filed a petition with the Food and Drug Administration that requested a ban on raw milk and raw milk products. The FDA had been trying to require that all products labeled “milk” be pasteurized since the 1970s, but met resistance and delays from the Department of Health and Human Services and certified raw milk producers. After hearing witness accounts and testimonies, the courts concluded that raw milk posed a serious threat to public health and should be banned from interstate sale.

It has been illegal to distribute raw milk from state to state ever since.

Since each state makes its own rules about the sale of raw milk, commerce within state borders gets a bit more complicated. Some states, like Florida and Virginia, prohibit all sales of raw milk. In Kentucky, you can only purchase raw goat milk straight from the farm. In New Hampshire, you can buy raw milk at a retail outlet, but it must adhere to uniform coliform standards. Things like cow-share agreements, where customers pay a fee for a percentage of cow’s milk, make things even more complicated. Alaska is an example of one state that allows “share” operations. Check out this chart for state-by-state raw milk regulations.

What Proponents Say About Raw Milk

The supporters of raw milk tout benefits like taste and nutrition with religious fervor. Some even claim other benefits like decreased allergies and less acne.

People who’ve tasted raw milk and liked it keep going back for more. In this study of dairy producers who drink raw milk, 72 percent cite taste as their primary motive.

Beyond drinking milk, raw milk cheese has a cult following, especially in France. Many of the country’s legendary cheeses are made with raw milk, which savants say imparts enticing characteristics unmatched in pasteurized varieties. In this 1998 New York Times article on the subject, cheese maker Bernard Antony said, ”Pasteurized cheese is not cheese; it’s like plastic.”

In addition to being a holy grail of nuanced flavors, many raw milk advocates flock to raw milk because of its purported health benefits. They believe pasteurization kills beneficial enzymes and good bacteria. They also say raw milk can help quell body pains, reduce allergies, cure lactose intolerance, and more as evidenced from this Realmilk.com testimonials page.

Supporting studies for the claims are patchy. This study does suggest there might be an association with consumption of farm milk and asthma and allergies, but not enough to be conclusive. A Standford University School of Medicine study found that raw milk does not reduce lactose intolerance, in direct conflict with some testimonials and surveys. Why the clash between testimony and science? More research is needed to find out.

Back in 2011, FDA officials raided Rawesome Foods and arrested its owner, James Stewart, and other raw milk suppliers for selling raw milk directly to customers. Apparently, Stewart had failed to show up for previous court appearances to face charges of shady fundraising, among other things. Even so, the arrest struck a cord with raw milk advocates who showed up to Stewart’s hearing wearing “raw milk heals” t-shirts.

They didn’t care if Stewart’s actions were illegal, they cared that he was fighting for their rights to consume raw milk. They believe that it should be individuals, not the government, who dictate what consumers put in their bodies.

What Opponents Say About Raw Milk

Opponents, most specifically regulatory officials, argue that consuming raw milk and dairy products pose a serious threat to health, a threat that exceeds any potential benefits. And why take an unnecessary risk?

Watch the emotional video below that plays to the fear of what can come from taking unnecessary risks.

They also say that there aren’t any benefits of raw milk that you can’t get from pasteurized milk. These quotes from the Centers for Disease Control and Prevention Raw Milk Questions and Answers page address some common raw milk proponent beliefs:

Many studies have shown that pasteurization does not significantly change the nutritional value of milk — pasteurized milk is rich in proteins, carbohydrates, and other nutrients. Heat slightly affects a few of the vitamins found in milk– thiamine, vitamin B12, and vitamin C– but milk is only a minor source of these vitamins.

While it’s true that the heating process of pasteurization does inactivate some enzymes in milk, the enzymes in raw animal milk are not thought to be important in human health.

There are no health benefits from drinking raw milk that cannot be obtained from drinking pasteurized milk that is free of disease-causing bacteria. The process of pasteurization of milk has never been found to be the cause of chronic diseases, allergies, or developmental or behavioral problems.

Why do they say raw milk is such a threat to health?

Unlike many other farm foods (e.g. milk and eggs), milk isn’t usually cooked before consumption, so there isn’t a step to kill illness-causing bacteria. Milk’s low acid content and high protein levels make it easier for pathogens to grow.

Even if milk comes out of the cow without bacteria, it can become contaminated easily during the farming process. Dairy farms breed pathogens naturally, even when they take necessary precautions. Pathogens can be transferred on multiple occasions on the farm:

For these reasons and more, officials cite that pasteurization is the only way to make sure the pathogens in milk won’t pose a threat to human health. They say even farmers who follow hygienic practices and test their raw milk cannot guarantee safety.

According to the CDC, outbreaks caused by raw milk  have increased from 30 in 2007-2009 to 51 in 2010-2012. The outbreaks are most commonly caused by Campylobacter, Escherichia coli, and Salmonella and include symptoms like diarrhea, vomiting, muscle aches, and fever. Relative to the amount of raw milk that is consumed, the risk of an outbreak from raw milk is 150 times greater than the risk of an outbreak from pasteurized milk.

Advocates from both sides point to studies, surveys, testimonials, and data to prove their points, but still each side clings to their beliefs with evangelical conviction. In a literature review requested by the Maryland House of Delegates’ Health and Government Operations Committee, the authors point to a need for both raw milk advocates and regulatory agencies to be open to discussion and compromise. Surely both sides of this contentious debate can find some common ground in the future.

Will raw milk become a substance relegated to the black market? Will federal lawmakers cave and loosen boundaries on interstate trade? Only time will tell, but 2015 promises to be an interesting year for those on both sides of the aisle in the raw milk debate.

NIH: A Survey of Foodborne Pathogens in Bulk Tank Milk and Raw Milk Consumption Among Farm Families in Pennsylvania.

How Stuff Works: How Pasteurization Works

USDA: How Do Cows Make Milk?

The New York Times: How We Poison Our Children

The New York Times: The French Resist Again: This Time, Over Cheese

Marler Clark: A Legal History of Raw Milk in the United States

Ashley Bell
Ashley Bell communicates about health and wellness every day as a non-profit Program Manager. She has a Bachelor’s degree in Business and Economics from the College of William and Mary, and loves to investigate what changes in healthy policy and research might mean for the future. Contact Ashley at staff@LawStreetMedia.com.
Share:
Related ItemsBacteriaCheeseDairyE. ColiFDAFranceHealthLactoseLibertyMilkPasteurizationRaw MilkRon PaulUSDA