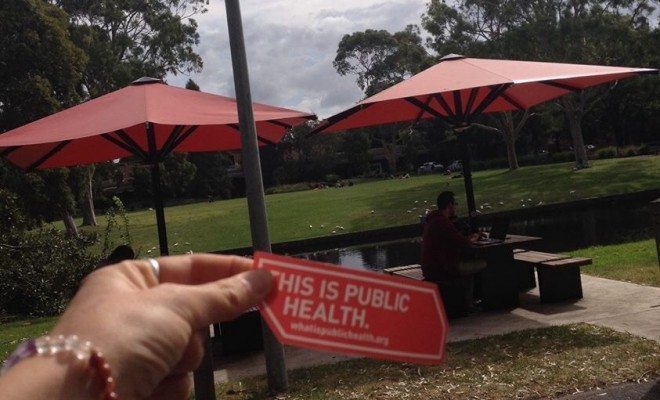 Are We Spending Enough on Public Health?

Treating people when they’re already sick is like beating back invaders who have already breached your defenses. In either scenario, prevention through good defense saves money, time, and lives. But when it comes to boosting our nation’s wellness defenses through public health spending, America falls short.

When it comes to health, concerns abound that we’re wasting money, time, and lives by spending too much on treatment and recovery and not enough on prevention. Public health interventions like smoking cessation programs and disaster preparedness initiatives save lives. The more we learn about the power of these interventions, the more experts call to keep them afloat with better funding. Spending a few dollars to get a person to quit smoking makes more sense than spending thousands of dollars to try to treat their lung cancer several years down the road. Preparing for a natural disaster beforehand is preferable to picking up the pieces afterwards.

So what is public health? It’s something that aims to keep you alive as long as possible. From preventing diseases to preparing for disasters, public health programs keep a wary eye out for threats and then help populations avoid or mitigate them. For example, if data shows a high diabetes risk for a certain population, public health programs will target that population with preventative messages about diet and exercise. Public health departments might also help local school systems prepare for potential natural disasters, like Florida does with its Children’s Disaster Preparedness Program.

Read on to learn about public health spending in the United States, and where we might need to invest some more time and money.

In April, the Trust for America’s Health (TFAH) released its report Investing in America’s Health: A State-by-State Look at Public Health Funding and Key Health Facts. The report highlights many ways America falls short on public health spending. They say America’s public health system “has been chronically underfunded for decades.” In Why We Don’t Spend Enough on Public Health, author David Hemenway says this is because the benefits of public health spending today aren’t seen until potentially far in the future. Governments and politicians want to see the benefits of their investments in the present day, so they favor spending on medical treatment and other immediately fulfilling initiatives.

Here are some of the key findings:

According to TFAH, when you adjust for inflation, public health spending in 2013 has sunk 10 percent from 2009. Many simply don’t see the benefits of spending on public health programs that yield intangible, future benefits when money could be spent on initiatives that produce immediate results like transportation or construction projects.

All States are Not Created Equal

States vary widely in what they spend on public health as funding is determined by the set-up of each state’s unique public health department. Indiana came in at a low of $15.14 per person, while Alaska spends $50.09 per person. This could be why health levels also vary widely from state to state.

Public Health Emergency Preparedness (PHEP) Cooperative Agreement Funding helps communities respond to natural disasters, epidemics, and outbreaks. It was backed by $919 million in 2005. In 2013, it was supported by just $643 million.

The Hospital Preparedness Program (HPP) gives healthcare facilities funding to beef up their preparedness measures. Funding for this program has been slashed by almost half, dropping from $515 million in 2004 to $255 million in 2015.

It’s estimated that 2/3 of all deaths in the United States result from chronic diseases typically linked to behaviors like diet or substance abuse. These diseases could be prevented by well funded intervention programs to decrease the behaviors that eventually lead to chronic diseases. Public health spending could save Americans millions in treatments for preventable diseases. Likewise public health under-spending could be costing us more than we’re saving.

In this video, the American Public Health Association outlines financial returns on every dollar of public health spending for different activities:

So, America spends too much money on treatment and not enough on prevention. The results aren’t pretty. In Integrating Public Health and Personal Care in a Reformed US Health Care System, authors Chernichovsky and Leibowitz write,

Compared with other developed countries, the United States has an inefficient and expensive health care system with poor outcomes and many citizens who are denied access.

Under-spending in public health doesn’t just lead to generally poor health, it also impedes our ability to respond to emergencies. Assistant professor at the Harvard Business School, Gautam Mukunda, referred to Ebola as a “wake-up call” for the state of U.S. health preparedness. In Ebola as a Wake-Up Call he wrote,

Ebola may serve as a badly needed wake-up call about something the public health and biosecurity community has been banging the drum about for years: the U.S. has massively underinvested in public health.

Mukunda says the Ebola situation highlighted the measly number of extreme disease cases our U.S. hospitals can handle. Hospitals have decreased their capacity for extreme cases to increase their efficiency, only to lose the ability to treat patients when rare diseases strike. Although the need for extreme treatments arises only occasionally, hospitals should always be prepared for them. But with limited funding, it’s hard to be prepared for the unlikely “worst case scenarios.”

How does the future look?

The good news: The Senate finally passed a joint budget resolution after a five year absence of agreement.

The bad news:  Their budget slahes non-defense government spending by about $500 billion over the next 10 years.

The budget cuts spell trouble for discretionary educational public health programs. From disease prevention to health care worker training, programs to promote good health may suffer across the board.

Simply put, our federal, state and local public health agencies will not be able to do their jobs to protect the health of the American people if these drastic cuts are enacted.

The budget would also annihilate the Affordable Care Act, including the Prevention and Public Health Fund, a program that focused on moving America towards a preventative health model by funding prevention communications, research, surveillance, immunizations, tobacco cessation programs, health-care training, and more.

The resolution isn’t yet a binding law, but indicates a set of collective and alarming priorities that steer America farther from the path of an integrated, preventative public health system. The Appropriations Committee still has to draft the spending bills, so there’s room for opposition. President Obama for one said he’ll veto bills following the restrictive budget.

Evidence to Inform the Future

According to the article, Evidence Links Increases In Public Health Spending To Declines In Preventable Deaths, published in Health Affairs, mortality rates fall anywhere from 1.1 – 6.9 percent for every 10 percent uptick in public health spend. The researchers made observations over thirteen years and found that the localities with the highest upsurges in public health spending had the most significant reductions in preventable deaths. The relationship held true in multiple causes of death and across different demographics. While the study is only a correlation, the linkage presents compelling evidence for the death-decreasing value of public health spending. The researchers believe a lack of substantial evidence for the ROI of public health campaigns may have hindered spending in the past, and their report takes one step towards getting that evidence.

The Trust for America’s Health (TFAH) advocates for an America with increased core public health spending. They also recommend ways to spend the money correctly. They call for a solid public health foundation for all populations in all states so everyone can be healthy no matter where they live. After that’s established, they advise investing in strong, evidence-backed public health programs and efforts to fortify emergency preparedness. Finally, they believe public health expenditures should be completely transparent and accessible to the American public.

Experts at a recent forum of National Public Health Week looked past mere spending to consider the future of public health and consider novel ways of approaching health to make America a healthier nation. The speakers want to stretch health thinking beyond the doctor’s office to focus on environmental and lifestyle factors that promote well-being like employment, housing, education, and even racism.

These experts dream of an improved, 360 degree view of public health. But sadly, their dreams need funding to become reality. If we continue on this path, it will be very hard to become a more healthful nation.

The New Yorker: Why America is Losing the Health Race

Harvard Business School: Ebola as a Wake Up Call

The Washington Post: Senate Passes Budget Even as Impasse on Spending Continues

The National Priorities Project: Military Spending in the United States

New England Journal of Medicine: Why We Don’t Spend Enough on Public Health

Ashley Bell
Ashley Bell communicates about health and wellness every day as a non-profit Program Manager. She has a Bachelor’s degree in Business and Economics from the College of William and Mary, and loves to investigate what changes in healthy policy and research might mean for the future. Contact Ashley at staff@LawStreetMedia.com.
Share:
Related ItemsCongressDiseaseEbolaHealthHouse of RepresentativesNatural DisastersOutbreakPublic HealthSenateSpendingUnited States