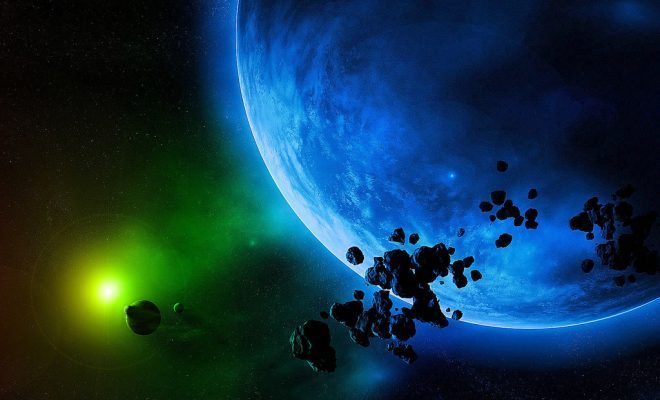 Can a Space Fence Really Fix the Problem of Space Trash?

When we envision space, we tend to imagine an intense beauty unknown to this world. We certainly don’t imagine a junk yard. But what is space actually like? Well, unfortunately it seems to be moving a bit more in the junk yard direction. Last year, Alfonso Cuarόn’s Oscar-winning film “Gravity” brought attention to the issue. Although the movie was dramatized and at times inaccurate according to NASA standards, the problem of orbital debris–space trash–is very real.

There are millions of objects of varying sizes orbiting the Earth at any given moment, and even though these objects are visually hidden to us and thousands of miles away, orbital debris affects everyone. Satellites control aspects of our everyday life like On-Demand features, cellphones, Google Earth, weather reports, and navigation systems. More importantly, satellites facilitate military communication and intelligence. In response to the problem, a second generation Space Fence run by the U.S. Air Force (USAF) should be up and running by 2019. Read on to learn everything you need to know about orbital debris and the Space Fence.

What is Orbital Debris?

Orbital Debris, or space trash, consists of man-made objects currently orbiting the Earth that do not serve a useful purpose. Debris is created every time a spacecraft separates from its launch vehicle. It is also created from dead satellites, explosions, collisions, chipped paint from spacecrafts, and small particle impacts. Since humans started placing objects in orbit over the last 50 years, the amount of debris has only increased.

Orbital debris is placed into three categories based on size. Larger objects, above ten cm, account for some 21,000 pieces of orbital debris. Medium particles, between one and ten cm, account for approximately 500,000 objects. Smaller pieces, less than one cm, account for over 100 million objects. These pieces move extremely fast, reaching speeds of up to five miles per second or 18,000 miles per hour. A collision at this rate is devastating. NASA equates being hit by an orbital object less than half an inch around and moving at six miles per second to being hit by a bowling ball moving at 300 miles per hour.

All of this debris is ultimately dangerous for astronauts and the International Space Station. Spacesuits are designed to protect against micrometeoroids, which are pieces of orbital debris the size of grains of sand. They use materials like those used for bulletproof vests. The International Space Station is the “most heavily shielded spacecraft ever,” able to withstand impacts from smaller debris. The station can also alter course to avoid larger objects coming toward it. Space shuttles generally return to Earth with cracks and evidence of impacts on their windows. For this reason, windows are protected three fold and replaced every mission.

Most other orbital debris disintegrates reentering Earth. In the rare occurrences that objects do make it back, they generally fall into bodies of water or unpopulated land areas like the Canadian tundra or Australian Outback. Over the past 50 years, approximately one catalogued piece of orbital debris has landed on Earth each day and there have been no reported human injuries. The higher the altitude, the longer an object will stay in orbit. Debris in a lower orbit will remain for only several years. On the opposite side of the spectrum, debris above 1,000 km from Earth can remain in orbit for over a century.

What is the Space Fence?

The Space Fence aims to tackle the problem of orbital debris. The project is led by the U.S. Air Force Materiel Command’s Electronic Systems Center at Hanscom Air Force Base in Massachusetts. It is a system designed to track debris in the Space Surveillance Network in order to initiate a warning system. The idea is very similar to that of hurricane or tornado tracking systems. The term “fence” comes from the “narrow, continent-wide planar energy field in space” created from the transmitters and receivers used in the project. High frequency radar acts like a “flashlight beam in a dark room that illuminates the bits of dust swirling around.”

The new Space Fence’s higher frequency system, operating in the S-band frequency range, will allow the detection of much smaller satellites and orbital debris. Its “modern, net-centric architecture” will also allow more effective tracking in Earth’s lower and medium orbit. Over its lifetime, the new Space Fence is expected to be valued at $6.1 billion. The system will include “geographically dispersed ground-based radars to provide timely assessment of space objects, events, and debris.” There will be one large S-band radar placed in Kwajalein Atoll in the Marshall Islands, with an option for a second based on funding. The projects also rely on international cooperation as part of global Space Situational Awareness efforts.

Who is building the Space Fence?

Why are we building a new Space Fence now?

There are a few things we need to keep an eye on. The first major source of large orbital debris came from China’s intentional and sloppy destruction of its Fengyun-IC weather satellite in January 2007. The satellite was destroyed by an anti-satellite device that caused hundreds of pieces of varying sizes of orbital debris.

Aside from these major events, researchers also fear the Kessler Syndrome. It is a theory, developed in 1978 by Donald Kessler, that describes a “self-sustaining cascading collision of orbital debris.” Essentially, the Kessler Syndrome is a domino effect. Two objects collide to cause pieces of debris that ultimately collide with one another to form more debris, and so on. The theory isn’t so far-fetched. In 2012, the United States issued over 10,000 close-call warnings that resulted in 75 avoidance maneuvers by satellite owners.

The U.S. first took an official stance to minimize orbital debris in 1988. A more recent June 2010 National Space Policy specifically addresses the issue of a clean space environment and orbital debris. NASA created an Orbital Debris Program Office at the Johnson Space Center in Texas. Its mission is to find ways for ventures to create less orbital debris and clean existing debris. Other U.S. agencies, like the Federal Aviation Administration and the National Oceanic and Atmospheric Administration, also need to follow specific guidelines for their spacecrafts. U.S. Orbital Mitigation Standard Practices were approved in 2001.

Guidelines are also followed by Russia, China, Japan, France, and the European Space Agency. Although there isn’t an international treaty surrounding orbital debris, the Inter-Agency Space Debris Coordination Committee was created among the leading international space agencies. Orbital debris is also a priority for the Scientific and Technical Subcommittee of the United Nations on the Peaceful Uses of Outer Space.

There are some legal issues inherent to cleaning up all the space debris. Each piece of large debris, like a defunct satellite, is technically owned by a country. For example, the U.S. doesn’t have authority to destroy a Chinese or Russian satellite. As Professor Johnson-Freese from the Naval War College said, “there are no salvage laws in space.” Under the current laws, one has to seek out permission from a satellite owner to go anywhere near it. This can make cleaning up space pretty tricky.

Orbital debris affects us down on Earth. We depend on a clear and safe space for many of the luxuries we take for granted. The Space Fence is one tool in the mission to create a clean space environment, but it is not enough. The Space Fence is only a tracking system; a plan needs to be enacted to deal with the orbital debris already in space. Moreover, guidelines for minimizing debris creation don’t remedy the harm that’s already been done. Some have proposed an international user fee for every launch to go into a global fund for space clean up. That idea has its own problems to sort through, like fair division, but it’s a start. We need to start taking the issue of the space environment seriously before the next major collision.

NASA: What is Orbital Debris?

Space Answers: How Have Space Technologies Affected Life Back on Earth?

Jessica McLaughlin
Jessica McLaughlin is a graduate of the University of Maryland with a degree in English Literature and Spanish. She works in the publishing industry and recently moved back to the DC area after living in NYC. Contact Jessica at staff@LawStreetMedia.com.
Share:
Related ItemsGravityLockheed MartinNASAOrbital DebrisSpaceSpace CenterSpace FenceSpace TrashUnited States