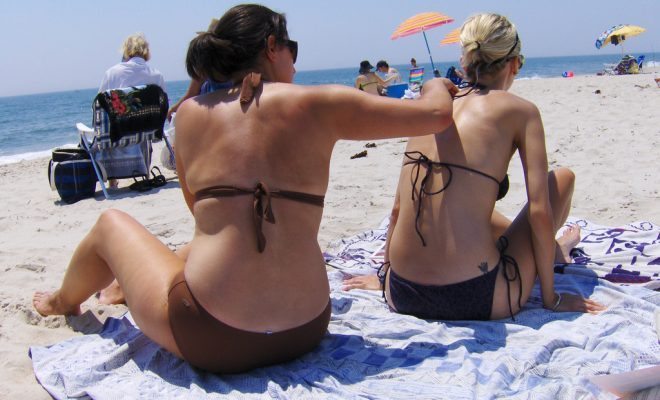 What is Skin Cancer?

Skin cancer is defined as:

The uncontrolled growth of abnormal skin cells. It occurs when unrepaired DNA damage to skin triggers mutations, or genetic defects, that lead the skin cells to multiply rapidly and form malignant tumors.

What are the most common types of skin cancer?

Basal Cell Carcinoma (BCC) is the most common form of skin cancer. In the U.S., 2.8 million cases of BCCs were diagnosed in 2010 and those numbers continue to increase. BCCs are “abnormal, uncontrolled growths or lesions” that form in the skin’s basal cells. Basal cells outline the outermost layer of the skin. BCCs resemble open sores, red patches, pink growths, shiny bumps, or scars. In most cases, both long-term sun exposure and short intense sun exposure can lead to the formation of BCCs. In rare instances, other factors like contact with arsenic, radiation exposure, and burn complications can trigger BCCs as well. They are rarely life threatening, but can cause disfigurement and muscle or nerve damage.

Squamous Cell Carcinoma (SCC) is the second most commonly occurring form of skin cancer. It develops in the skin’s upper layer squamous cells. Approximately 700,000 cases of SCC are diagnosed annually in the United States. Reportedly, between 3,900 and 8,000 cases had fatal results in 2012. In the last thirty years, SCC cases have increased by 200 percent. They generally resemble “scaly red patches, open sores, elevated growths with a central depression, or warts” that may crust or bleed. SCCs are most often caused by ultra violet (UV) exposure whether through daily long-term sun exposure, short intense sun exposure, or tanning beds. With a few exceptions, SCCs occur on parts of the body most often exposed to the sun. Although previously associated with men over 50, SCCs are steadily increasing in women under 30. This phenomenon is largely attributed to tanning beds.

Melanoma is the most dangerous form of skin cancer. Melanoma tumors “originate in the pigment-producing melanocytes in the basal layer of the epidermis.” They resemble moles, and can develop from moles as well. Most often, they are black or brown. The main source of melanomas is intense, sporadic UV exposure regularly leading to sunburn. There is also a significantly higher risk for those with a genetic predisposition toward skin cancer. Melanomas account for 9,710 deaths in the U.S. annually. There are 120,000 new cases diagnosed each year. Early detection is key as the disease is harder to cure when the cancer metastasizes to other parts of the body.

Each year there are approximately five million Americans treated for skin cancer. There are more new cases of skin cancer than incidences of breast, lung, colon, and prostate cancer combined. One in five Americans will develop skin cancer in his or her lifetime. There is a 40-50 percent chance that an American who lives to the age of 65 will either develop a BCC or SCC. Approximately 90 percent of non-melanoma skin cancers are developed from UV radiation from the sun. And surprisingly, more people develop skin cancer through tanning than lung cancer through smoking.

One person dies of melanoma every 57 minutes and one in every 50 men and women will be diagnosed with it in his or her lifetime. Melanoma is one of three cancers with an increasing mortality rate (liver cancer and esophageal cancer). It is the most frequently occurring cancer in young adults (25-29) and the second most frequently occurring cancer in young people (15-29).

There are a variety of contributing risk factors for skin cancer. Unprotected overexposure to UV radiation from both the sun and tanning beds is the predominant source of skin cancer. This can come from extended daily exposure over the course of a lifetime or short intense spurts that result in sunburn. It is generally the latter that causes melanoma.

As of September 2, 2014, the FDA reclassified tanning beds from low-moderate risk to moderate-high risk devices. Indoor tanning is linked to more than 419,000 skin cancer cases a year in the U.S. A one-time indoor tanning session increases a person’s risk of developing squamous cell carcinoma by 67 percent and basal cell carcinoma by 29 percent. Two to three million teens use indoor tanning beds every year and subsequently increase their risk of melanoma by 75 percent.

Through the successes of clinical trials, the FDA has approved seven new treatments for advanced metastatic melanoma cancer since 2011. The new treatment options include targeted therapies and immunotherapies. Targeted therapies “disrupt specific molecules that help cancer cells survive and grow.” Researchers are particularly excited about innovative immunotherapies that restore and enhance the immune system’s ability to fight cancer

National Cancer Institute’s Howard Streicher stated the difference for patients diagnosed with advanced melanoma just 5 years ago and today “is like night and day.”

Targeted therapies disrupt the vital communication route of the signaling pathway in tumor cells known as the MAP kinase or MAPK pathway. The pathway influences “critical functions such as cell division and cell death.” Two proteins involved in the makeup of the MAPK pathway are the BRAF and the MEK. More than half of advanced melanomas have mutations in the BRAF gene. Two of the recently approved FDA drugs specifically target BRAF proteins: vemurafenib and dabrafenib. Each drug was approved after findings from phase III trials that tested patients with tumors that had one or two specific mutations in the BRAF gene. Trial results proved a longer overall survival rate without the disease worsening compared to the drug used as the standard of care at the time.

Melanoma is particularly predisposed to inducing an immune response. Researchers realized that tumors can divert T-Cells (particular proteins on the surface of immune cells) and other immune cells from attacking them by manipulating the immune system. The tumors essentially mask themselves from the T-Cells, while “dial[ing] back the immune response.”

One of the new drugs, Ipilimumab, “targets a checkpoint protein on T cells called CTLA-4” that releases the T-cells to attack tumors. This drug came into effect after a phase III trial that tested patients with cancer no longer reacting to FDA-approved and/or common therapies.

The other newly FDA-approved drugs for both targeted and immunotherapies saw similarly encouraging results. Testing is still in a fairly new territory and final results await to be seen. Future inquiries include: what combination of drugs would be most effective and which patients necessitate which specific drugs? Researchers are also looking to further limit side effects. Although most side effects were minor, some included severe skin rashes, diarrhea, colitis, and fatal lung inflammation.

For starters, the Surgeon General’s office published its most recent Call to Action in 2014 on preventing skin cancer. A Call to Action is a “science-based document to stimulate action nationwide to solve a major public health problem.” The aim of this specific document is to increase skin cancer awareness and to call on various organizations and sectors in the U.S. to become invested in skin cancer prevention. The Call to Action presents a five step plan: promote sun protection in outdoor settings, inform the public about UV exposure, promote policies that advocate skin cancer prevention, minimize side effects from indoor tanning, and “strengthen research, surveillance, monitoring, and evaluation related to skin cancer prevention.” It also emphasizes skin cancer as a major threat toward American youth. It calls for coordination and support from federal, state, and local sectors of the business, health, and educational communities.

California has some specific laws that deal with UV safety prevention. Billy’s Bill for Sun Safety requires schools to allow students to wear protective sun gear outside and wear sunscreen without a physician’s note or prescription during the school day. The California Labor Code also allows lifeguards who develop skin cancer while working with a public agency or the California Department of Parks and Recreation to be eligible for workers’ compensation. Lastly, minors under 14 are prohibited from indoor tanning and children between the ages of 14-18 must have a parent or guardian’s written permission.

In New York, aside from regulations for minors, tanners 18 and over must sign a statement acknowledging the dangers of indoor tanning before stepping into the tanning booth. Staff at tanning salons are required to wear protective gear as well. The state also requires sun-safety education and necessary equipment for state employees that spend five or more hours in the sun daily.

Altogether, it seems more and more states are getting on board regarding UV preventative regulation and informing the public.

Skin cancer is definitely a major health concern in the United States. New clinical research and national legislation are at the forefront of the fight. On the public end, we need to stay informed, help educate others, and take simple preventative measures. By implementing everyday habits we can best fight skin cancer, such as regularly applying sunscreen and wearing proper attire. Moreover, as a society, we need to stop perpetuating the trend that tanned skin in more attractive. But in all, the strides fighting skin cancer look extremely promising and the efforts don’t show any signs of slowing down.

The Surgeon General: Call to Action to Prevent Skin Cancer

Jessica McLaughlin
Jessica McLaughlin is a graduate of the University of Maryland with a degree in English Literature and Spanish. She works in the publishing industry and recently moved back to the DC area after living in NYC. Contact Jessica at staff@LawStreetMedia.com.
Share:
Related ItemsCancerFDAIndoor TanningMelanomaSkin CancerTanTanningUV Rays