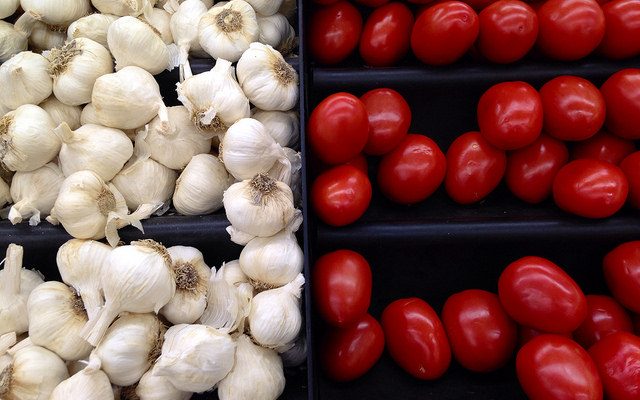 Food Sovereignty: Shifting Control from the Government to Local Farmers?

When Upton Sinclair wrote “The Jungle,” he intended to show the harsh conditions of poor immigrants working in the meat packing factories of Chicago. Published in 1906, his book ended up being one of the earliest catalysts for American food regulation. People were revolted by the unregulated food industry and the awful truth behind where their meat came from.  Sinclair’s book led to a public outcry, and many called for more regulations for the food industry. And for good reason–throughout American history up until that point there had never been any serious attempts to regulate the food industry.

We now live in an age of big farms and monoculture. It used to be that most of the food you ate was grown or raised fairly close to where you lived. As technology and jobs changed, and the demand for meat grew, food began to be produced on a larger scale. Read on to learn more about the changing food culture and the concept of “food sovereignty.”

During President Theodore Roosevelt’s tenure, the U.S. began regulating food and drugs produced in the country with the Pure Food and Drugs Act of 1906. This act prohibited “misbranded and adulterated foods, drinks, and drugs in interstate commerce.” This was regulated by the Bureau of Chemistry in the Department of Agriculture, which eventually became the Food and Drug Administration (FDA) in 1930.

Today, food laws are still imperfect. But the American public is increasingly conscious of where and how food is produced. Debates regarding food production are happening all over the country. Most Americans eat three times a day. A 2011 study found that the average American eats roughly 1,996 pounds of food each year. With that much food at stake, it makes sense that people are concerned.

Recently in America there has been a push toward “eating local.” Many people want to go to farmers markets and buy their tomatoes and cabbage from the farmer who grew it. They want to buy their eggs from chickens that were raised in hen houses that they could visit, rather than from a place straight out of “Food Inc.”

In short, people are more aware of where their food is coming from. And that is where “food sovereignty” comes in. It’s an issue that is starting to gain traction in the U.S. Those who advocate for food sovereignty feel that farming has become over regulated. The movement is global, and many farmers around the world are standing up for themselves and for food production as a whole.

What is Food Sovereignty?

La Vía Campesina, an international “peasant” movement, coined the term “food sovereignty” at the 1996 World Food Summit. The group defines it as such:

Food sovereignty is the right of peoples to healthy and culturally appropriate food produced through sustainable methods and their right to define their own food and agriculture systems.

With the increased demand for locally-grown produce in America, it’s becoming more popular for farmers to want to sell their produce to their local communities. But it’s also important to note that outside of the U.S., food sovereignty takes on a much more important role. Hannah Wittman, Annette Desmarais, and Nettie Wiebe, authors of “Food Sovereignty: Reconnecting Food, Nature and Community,” wrote:

The stunted growth and high mortality rates of hungry children and the ill health and lost potential of malnourished adults are clear and tragic results of the chronic food shortages suffered by an increasing number of people. A growing number of households and communities fear for tomorrow’s meals, even though there may be enough food for today.

Shifting more power to local farmers would increase the availability of food. And food would not have to travel as much, making it less costly and more likely to be fresh.

In the U.S., Maine Leads the Way

The U.S. has very structured regulations for farmers. One state is breaking away from this model. On June 16, Maine Governor Paul LePage signed LD 725, or An Act to Recognize Local Control Regarding Food Systems. This act is the first of its kind in the United States. It shifts power from the state to local municipalities. The Bangor Daily News described the rationale behind the law:

Supporters of food sovereignty want local food producers to be exempt from state licensing and inspections governing the selling of food as long as the transactions are between the producers and the customers for home consumption or when the food is sold and consumed at community events such as church suppers.

The law allows small farmers to sell food within their communities with fewer government regulations. Maine Rep. Craig Hickman enthusiastically embraced the passage of the law. In an interview with the Bangor Daily News, he said, “Food sovereignty means the improved health and well-being of the people of Maine by reducing hunger and increasing food self-sufficiency through improved access to wholesome, nutritious, and locally produced foods.”

According to a 2012 USDA census, Maine has some of the youngest farmers in the country. And the field is drawing in more and more young farmers, partially due to the growing demand for local produce. As more farmers embraced this lifestyle, and consumers demanded local produce, Maine decided to change the regulations a bit to accommodate them.

In 2013, many municipalities in Maine fought for food sovereignty. One of their complaints was about a new law that allowed small farms that sold less than $1,000 worth of chicken a year to slaughter chickens on their own farms rather than go to a slaughter house. The regulations it sought to change would require those farms to spend as much as $40,000 to be able to properly slaughter their chickens.

The Advantages of Food Sovereignty

Less regulations may give pause to the more cautious eater or the revolted reader who cannot get the images of “The Jungle” out of his or her head. But many local Maine representatives feel that this new act is a good thing for Maine. So what regulations are being repealed exactly? While the law states that food produced locally must still adhere to federal standards, these local farms do not require state licensing, nor do they have to go through state inspections of food produced, sold, and consumed locally.

The new law does not apply to every food producer and seller, however. Chain grocery stores and establishments selling large quantities of food must still adhere to the old laws. The new act is specifically designed for small farmers selling within their communities.

Betsy Garrold, the acting executive director of Food for Maine’s Future, felt that this will encourage many young and burgeoning farmers to enter the trade. She told the Bangor Daily News, “This means face-to-face transactions are legal if your town has passed a food sovereignty ordinance [and] you can sell food without excessive government regulations,” she said. “If we can feed ourselves, no one can push us around.”

Garrold felt that with the amount of farms in Maine, large and small, it is hard to make one law that regulates everyone equally. “Now if a small vegetable farmer wants to diversify their holdings and run a few meat birds, they can,” she said.

But Not Everyone is Onboard

Maine might be alone in its quest to deregulate farmers for a while. As of right now, no other states are moving to enact food sovereignty laws.

There are national food sovereignty groups, like the U.S. Food Sovereignty Alliance (USFSA). However, the group is more engaged in activism than writing laws. USFSA “works to end poverty, rebuild local food economies, and assert democratic control over the food system,” according to its website.

And while other states do not seem to be following Maine any time soon, not even all Maine farmers are pleased with the new act. When Maine began allowing certain municipalities more sovereignty back in 2013, Kevin Poland, a local Maine farmer, was less than pleased.

“It has nothing to do with encouraging local farming,” Poland said in an interview with NPR back in 2013. “There’s plenty of that here. What there should be more encouragement of is food safety. The state of Maine has laws that work,” he added.

Perhaps this is why other states have not joined Maine in passing their own food sovereignty laws. With all of the criticism that the food industry faces, it could seem counterintuitive to try to ease regulations on those who provide us with our food.

While Maine may be the first state in the U.S. to enact a food sovereignty law, other global initiatives have been on the forefront of this movement for decades. La Vía Campesina (The Peasants’ Way) started in 1993 as a way to support small farmers. The group is now a huge global initiative that has been one of the largest advocates of food sovereignty.

La Vía Campesina says on its website that it represents, “164 local and national organizations in 73 countries from Africa, Asia, Europe and the Americas. Altogether, it represents about 200 million farmers.”

Most recently, the group supported a rally in Morogoro, Tanzania on June 23. The protesters felt that the government was not acting in the best interest of the Tanzanian people. In a statement on its website, La Vía Campesina said, “We know that our African elites in the public and private sectors have been for many years colluding in corruption with the evil transnational corporations which today represent the new face of imperialist neo-colonialism.”

Food sovereignty is a topic that is gaining traction around the world. Those fighting for it do so because they cannot comply with the regulations imposed by the government that are intended for larger farms. For small farmers selling food within their community, these regulations can be damaging. In America, it is less dire that we change our food sovereignty laws, but in other countries, the consequences are higher. Food shortages and government corruption are why farmers around the world want to take their food back into their own hands.

Anne Grae Martin
Anne Grae Martin is a member of the class of 2017 University of Delaware. She is majoring in English Professional Writing and minoring in French and Spanish. When she’s not writing for Law Street, Anne Grae loves doing yoga, cooking, and correcting her friends’ grammar mistakes. Contact Anne Grae at staff@LawStreetMedia.com.
Share:
Related ItemsFarmingFDAFoodFood SovereigntyGMOsGovernor LePageMaineOrganicRegulations