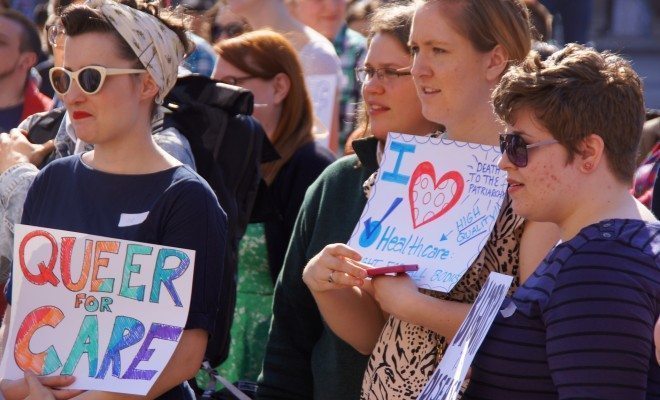 What does it mean to be transgender?

According to GLAAD, transgender is “an umbrella term for people whose gender identity and/or gender expression differs from what is typically associated with the sex they were assigned at birth.” “Transsexual” is an older term “preferred by some people who have permanently changed–or seek to change–their bodies through medical intervention.” Gender identity is a person’s innate sense of being female, male, or other. Gender expression is how “a person communicates gender identity to others through behavior, clothing, hairstyles, voice, or body characteristics.”

It’s important to note that being transgender is not considered a mental disorder as it does not cause significant distress or disability; however, those who identify as trans* have difficulty finding “affordable resources, such as counseling, hormone therapy, medical procedures and the social support necessary to freely express their gender identity and minimize discrimination.” The culmination of these experiences can lead to higher levels of anxiety and/or depression than among the cisgender population.

What is Gender Dysphoria?

Gender Dysphoria It is a diagnosis given to people who “experience intense, persistent gender incongruence.” They do not identify with the physical sex they were assigned at birth. For an official diagnosis, the incongruence must last for at least six months. For children, the wish to be a different gender must be apparent and verbalized. People with gender dysphoria exhibit an overwhelming desire to be rid of his or her biological gender characteristics or “strong conviction that one has feelings and reactions typical of the other gender.” In order to cure gender dysphoria, some opt to undergo hormone therapies and or/medical surgeries.

The World Professional Association for Transgender Health (WPATH) recommends a “real-life experience” and hormone therapy before surgery. A real-life experience is a specific duration of time that a transgender person must completely live as their desired gender while maintaining a mentally healthy and active lifestyle. People transitioning from male to female take testosterone-blocking agents along with female hormones like estrogen and progesterone in order to develop characteristics such as breasts, softer skin, and less body hair. Female to male candidates take testosterone in order to deepen the voice, shrink the breasts, and increase physical strength.

Since 1989, Medicare specifically denied coverage for sex reassignment surgery under the National Coverage Determination 140.3. The decision was based on a 1981 National Center of Health Care Technology report, which stated:

Because of the lack of well controlled, long term studies of the safety and effectiveness of the surgical procedures and attendant therapies for transsexuals, the treatment is considered experimental. Moreover, there is a high rate of serious complications for these surgical procedures. For these reasons, transsexual surgery is not covered.

Basically, the surgeries were considered too risky and dangerous.

Since then, the American Medical Association, the American Psychological Association, and the American Psychiatric Association began advocating sex reassignment surgery as a productive, effective relief for victims of Gender Dysphoria. The U.S. Department of Health and Human Services Departmental Appeals Board overturned the decision in May 2014. The board stated that the policy was “based on outdated, incomplete, and biased science, and did not reflect contemporary medical science or standards of care.” This doesn’t mean candidates will automatically be approved for sex reassignment surgery, but approval or denial will be given based on individual cases, not a blanket policy.

Medicare’s reevaluation of the ban started when 74-year-old army veteran Denee Mallon was denied her request for gender reassignment surgery by Medicare. In turn, she challenged the government insurance ban against sex reassignment surgeries.

After receiving the surgery, Mallon happily stated, “I feel congruent, like I’m finally one complete human being where my body matches my innermost feelings, my psyche. I feel complete.”

Mallon initially realized her gender identity when she was a 12 year old child in the 1940s. She continued to live as a man, having five kids and entering three marriages. When she could afford sex reassignment surgery in the late 70s and early 80s, her doctors refused to approve it because she was participating in consensual sex with women. When she finally received approval in the late 80s, she could no long afford it. She lived her life as a woman aided by hormonal therapy starting at age 40. She hid the fact that she was born male until 2012 when she became open about it and came out of what she calls “stealth mode.”

In response to critics calling being transgender a “lifestyle” choice, Mallon stated, “It’s far deeper than that. It’s so a part of my basic psyche, there’s no escaping it. I’ve tried to be the kind of man that society wanted and my feminine self just kept creeping up.”

Mallon decided to challenge Medicare after she was refused sex reassignment coverage by both her secondary private insurer and Medicare. She could not afford the expensive surgery living on $650 a month in Social Security income. The challenge and review process took about 18 months, before Medicare decided to lift the ban.

Pros of Lifting the Ban

According to a British study, 88 percent of patients whounderwent male to female sexual reassignment surgery were content with the results. Those with Gender Dysphoria that undergo the transition process have substantial mental health improvement and a decrease in substance abuse and depression. According to a 2010 U.S. study, 41 percent of transgender people have attempted suicide. Sex reassignment surgery is a critical step in creating mental stability for some.

Marci Bowers, a transgender obstetrician and gynecologist in Burlingame, California, reported only two out of 1,300 people on whom she has performed sex reassignment surgery wanted to reverse the procedure. This is a 99.85 percent success rate.

The lifted ban is not only a significant win for transgender rights, but perhaps a catalyst for more change to come. Many public and private insurers take cues from the government. This could be the start of a long line of insurers securing coverage for these types of surgeries. In 2002, zero Fortune 500 companies offered transgender benefits. Ten years later, 19 percent did, and by 2014 it was 28 percent.

The first attempt to lift the ban came in 2013, but there were protests from conservative and religious groups. Defenders of the ban don’t believe these types of surgeries should be paid for by tax payer money.

Real compassion for those struggling with a gender identity disorder is to offer mental health treatments that help men and women become comfortable with their actual biological sex — not to advocate for costly and controversial surgeries subsidized by taxpayers.

Frank Schubert, national political director for the National Organization for Marriage, doesn’t believe condoning the surgery sends the right message to America’s youth “to respect who they are, how they were born.”

There’s plenty of evidence to suggest that an overwhelming majority of those who undergo sex reassignment surgery for Gender Dysphoria find a substantial increase in their quality of life. In a demographic that experiences high rates of depression and suicide, the importance of these procedures is clear. The high expense of these surgeries essentially eliminates the option if they aren’t covered by insurance. Most people don’t have an extra $50,000 to spend on treatment for any medical condition. The lifted ban holds important symbolic value for the future and what’s to come.

Jessica McLaughlin
Jessica McLaughlin is a graduate of the University of Maryland with a degree in English Literature and Spanish. She works in the publishing industry and recently moved back to the DC area after living in NYC. Contact Jessica at staff@LawStreetMedia.com.
Share:
Related ItemsDenee MallonGender Reassignment SurgeryLGBTQMedicareSexual Reassignment SurgeryTrans RightsTrans*Transgender