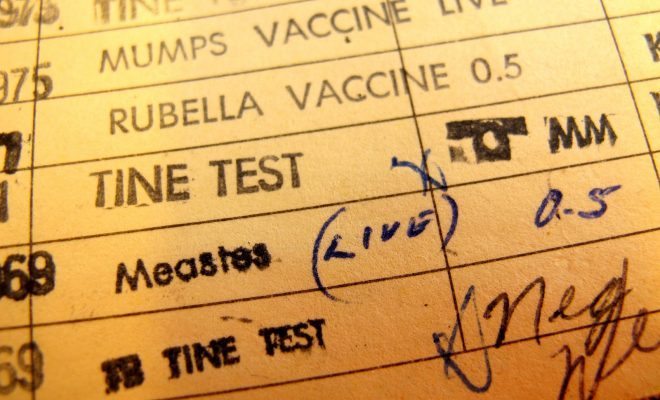 Measles: Why is it Back and What Can Be Done?

Measles probably doesn’t make your list of top Disneyland souvenirs. Unfortunately, many unvaccinated visitors to Disneyland in California brought measles home along with mouse ears this season. It gets worse, because these people unknowingly shared their viral souvenir with other unvaccinated people in schools, banks, and even on public transportation. The result? A multi-state measles outbreak that has sparked a tirade of vaccination discourse. If measles can happen in the “happiest place on Earth” of all settings, we’re all in trouble.

Read on to find out more about these measles everyone’s talking about and why some people choose to opt out of a vaccine that most experts agree is safe and effective.

Once upon a time (in the year 2000), the United States declared measles eliminated. Don’t get too excited. Eliminated in this sense doesn’t mean annihilated or wiped out completely like Dodo birds or Blockbuster stores. In 2000, measles was no longer endemic, or transmitted in the United States for twelve months or more. That happily ever after did not last long. Since then, measles cases have slowly but surely crawled back up; check out the CDC’s breakdown here. Overall, there have been 121 cases reported from January 1 to February 6, 2015.

Why the climbing cases? Although measles was eliminated in the United States, there was still plenty of it going around the rest of the world, especially in places without the same vaccination resources as the United States. In developing countries, measles causes about one million deaths each year.

Measles from the rest of the globe crept back into the United States on the coattails of international visitors or jet-setting residents. For example, experts trace the California outbreak to a traveler who was infected overseas. This person exposed other Disneyland visitors and the virus quickly spread throughout unvaccinated clusters in California.

Why is measles so hard to fight?

We’ll chalk it up to two basic reasons, each individually complicated:

Let’s talk about each in more detail.

In this most recent outbreak, cases of measles grew by 19 percent in just one week according to the Centers for Disease Control and Prevention.

Here are some other reasons that measles is viral wildfire:

What’s more, measles can be severe. Before vaccinations, measles caused about 2.6 million deaths worldwide each year. In populations with malnutrition and poor health care, almost ten percent of measles cases end in death. Death occurs because of complications that result from measles, including encephalitis, pneumonia, and even blindness.

The World Health Organization calls the measles vaccine one of the best buys in public health, attributed to preventing about 15.6 million deaths in 13 years. Vaccines work because measles is considered antigenically stable; it doesn’t shift or drift to get around our immune system like the flu can. So one shot pretty much leads to lifetime immunity.

No antiviral treatment for measles exists. Most often it’s treated with supplements of Vitamin A and proper hydration, but you still have to let the disease run its course. Prevention through vaccinations avoids all of this.

The Breach in Herd Immunity

Tiny, adorable babies (and other vulnerable groups) physically can’t get vaccinated. Without immunization, measles plows through the population, causing the most harm to babies with developing immune systems; however, if many people are immunized, they create a buffer that keeps those who can’t get immunized safe from the disease.  It’s call herd immunity.

Watch the video below for a great explanation of why vaccines are important and how opting out is bad for the herd.

The idea of herd immunity puts the public health context back in the very personal choice of vaccination. Cooperation leads to successful herd immunity. The World Health Organization says 95 percent of people should be vaccinated to eliminate measles.

So, why don’t people just get vaccinated?

Downward trends in vaccination rates leave the United States vulnerable to measles attacks as we’re exposed to measles by global visitors and travel. If measles is so serious yet preventable, why do people still opt out?

There are many reasons that parents don’t get their kids vaccinated. They range from distrust of government to fear of negative side effects. In the California outbreak, people cite religious, philosophical, or personal reasons for opting out of vaccinations. Many doctors balk at the generally non-medical tone of these excuses.

Experts respond to doubts with a profusion of facts that counter most fears raised about vaccination. A 12-year study of Measles, Mumps, Rubella (MMR) vaccines found that it does not increase the risk for several suspected health outcomes. The World Health Organization published data that found no association between measles vaccines and Crohn’s disease. And plenty of other studies debunk common vaccination fears.

Here’s an alarming fact: in the anti-vaccination argument, facts don’t necessarily work. In some cases, arguing with facts as weapons makes the outcome worse. Research found that busting vaccine myths actually increases hesitancy around vaccination instead of raising intent to vaccinate. This all means that the sole strategy of many health communicators might actually backfire among this particularly skeptical target audience.

People, unlike computers, pepper even their logical decisions with colorful human emotions. Many social and emotional factors influence how we perceive, interpret, and react to facts and science. Here are some reasons why cold facts don’t work in contentious arguments, like the vaccine debate.

We Cling to Naive Beliefs

People accept facts, but often cling to their intuitions with stunning zeal. This study demonstrates how even people with advanced scientific knowledge express natural delays when asked if the Earth orbits the Sun. From our humble perspective on Earth, this doesn’t look true. That simple intuition influences our initial gut reaction, even when we know facts to the contrary.

Personal stories heighten naive beliefs. We’ll believe a friend’s anecdote about vaccines causing her child’s autism even when numerous facts state that it’s unlikely. Cold, hard facts can’t compete with your emotional reaction to the anecdote. A little intrigue might produce a similar effect. This study found parents less likely to vaccinate their kids after reading conspiracy theories on vaccination.

We Conform to Group Values

People make decisions that affirm their cultural identities and connections to people with shared values. It’s a tendency called cultural cognition. New info will pass through a pre-existing lens and if it’s contrary to fundamental beliefs, it might lead to even more polarization.

We Love to Be Right

The fancy word? Confirmation bias. It’s the tendency to seek out evidence that supports our current beliefs, regardless of accuracy. Emotionally charged issues inflate this tendency. The internet and on-demand television makes this force unstoppable. You can easily ensure you only hear what you want to hear.

Our Resources Hamper Our Decisions

Experts call it bounded rationality. We face difficult scientific issues, yet we still evaluate them with limited information, a fixed set of cognitive abilities, and limited time. Think of reading the terms and conditions before you buy a song on iTunes. You know it’s theoretically a good idea (just in case), but who has 45 minutes for that?

To keep measles cases from increasing, more people need to be vaccinated. We could try to convince more people they should have their kids vaccinated or strengthen immunization laws and policy (e.g. making exemptions harder).

Convince More People They Should Vaccinate

As outlined above, the most avid vaccination opponents might be nearly impossible to turn. In fact, some vaccination opponents actively seek out measles infections for their children by hosting measles parties. The trial and error process involved in developing and testing new communications materials to target this finicky audience would be time consuming. Many experts believe we should move to strengthening immunization laws immediately before measles is able to become a more serious problem in the United States.

Vaccination isn’t legally required and exemption allowances vary from state to state and can get pretty complicated. Lawmakers who recognize the need for change are proposing to overhaul vaccination laws in many states.

California is proposing to end personal (as opposed to medical or religious) exemptions. They’re also moving to require that public schools publish the percentage of enrolled children who are vaccinated, an effort that Arizona is also pursuing.

Other states are moving in the opposite direction. Montana and New York have introduced bills that would make parental exemptions easier. You can read more about recent vaccination-related legislation here. Be prepared for some interesting immunization debates in the coming months.

In addition to cracking down on state-by-state exemption policy, the Network for Public Health Law provides a few more suggestions, including pursuing tort claims, and taking a more active role in fighting measles globally.

Whatever path we take, vaccinations are here to stay. Unless we completely eradicate measles globally, vaccines will always be necessary to protect the United States from outbreaks. The recent outbreak in California (and other states) illustrates how important herd immunity really is. Vaccination is a personal choice that affects public health. How will we weigh personal rights against this public responsibility? Only time will tell.

National Geographic: Why Do So Many Reasonable People Doubt Science?

Center For Food Integrity: “Cracking the Code on Food Issues: Insights from Moms, Millennials and Foodies.”

Expert Review of Vaccines: Vaccination Against Measles: A Neverending Story

Pediatrics: Has the Measles-Mumps-Rubella Vaccine Been Fully Exonerated?

Science Daily: Vaccination Opt Out is a Cop Out That Literally is Making People Sick, Says Infectious Disease Leader

Medical News Today: Why Myth-Busting Vaccination Fears is Trickier Than You Think

Politico: Vaccination Foes on the Defensive

Ashley Bell
Ashley Bell communicates about health and wellness every day as a non-profit Program Manager. She has a Bachelor’s degree in Business and Economics from the College of William and Mary, and loves to investigate what changes in healthy policy and research might mean for the future. Contact Ashley at staff@LawStreetMedia.com.
Share:
Related ItemsCDCDisneylandHerd ImmunityImmunityMeaslesMeasles OutbreakMMRMumpsOutbreakRubellaTravel