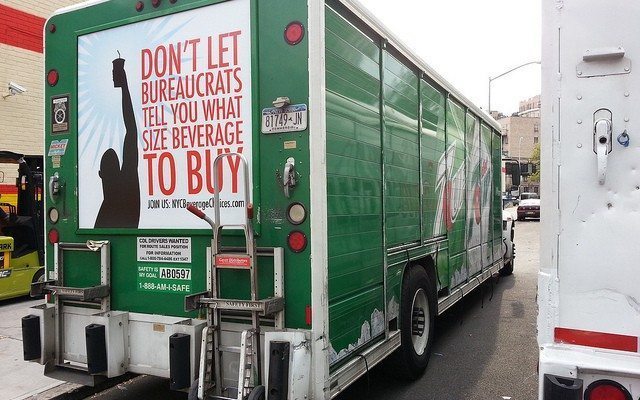 How the Government Regulates Obesity

This question might conjure chilling images of flavorless fixed rations, compulsory exercise regimes, and the foreboding scales of a totalitarian weight monitoring mechanism.

Take a deep breath. Mandatory weigh-ins have no place in your near future. However, the government already influences your weight in indirect ways using methods more subtle than scales. It’s not because they’re nosy or superficial, it’s because weight, specifically being overweight, is a burgeoning public health plight in the United States.

What’s the big problem with obesity?

In the not-too-distant past, being overweight was a harmless stigma — a matter of aesthetics and not health. Today we know that obesity comes along with a load of serious health complications like heart disease, high blood pressure, Type 2 Diabetes, and some types of cancer. The Centers for Disease Control and Prevention (CDC) estimate that 112,000 deaths a year are associated with obesity. Related medical expenses burden the United States with more than $100 billion annually. Ouch.

What’s even scarier? Obesity prevalence is overwhelming the United States population. According to the CDC, more than one third of American adults are obese. That’s more than double the rate of the last decade.

Before you brush it off as an unfortunate fact of life, here’s some visual perspective from the CDC on this explosive growth:

Obesity prevalence in 1990. The darkest blue represents a rate of 10%-14% population obesity.

Obesity prevalence in 2009. Note all of the completely new colors. Obesity rates of all states have surpassed those seen in 1990.

Previous efforts to confront obesity have focused on individual interventions like nutrition education. The climbing rate of obesity despite these efforts revealed some missing pieces in the strategy. Experts realized obesity wasn’t just a matter of willpower. Recognizing the multi-faceted approach needed to combat obesity, officials fixed their attention on underlying causes that escape an individual’s control.

How is obesity out of individual control?

Obesity isn’t just about individual choices, it’s about individual options. The fight against obesity is futile for those without the right options. For example, poor access to supermarkets because of zoning complications may make smart food choices a hopeless pursuit. A simple jog isn’t an option for those with nowhere to do it safely.

Furthermore, we have a hard time helping ourselves. One study found that concern over weight isn’t a sufficient catalyst for behavioral change. Concerned people who lack access to healthy foods are stripped of the power for change. The pervasiveness of fast food establishments peddling calorie-dense foods present an invincible double threat.

Government regulations can interfere when individual resolve falls short. Large-scale policies to create healthier communities could help those who can’t help themselves.

What can the government do?

The Commerce Clause of the Constitution bestows the federal government with the right to regulate state commerce. This translates practically to weight-related regulations like food labeling mandates and subsidies on foods. On a more local level, the Constitution grants states the power to regulate the health, safety, and welfare of their populations. This broad power translates to a variety of possible actions.

Here are some examples of perfectly legal government actions that affect what we eat and consequently what we weigh:

Some cities and states already have taxes on sugary drinks. Opinions are split on extending taxes on junk food. James Carville thinks it might be a good idea to tax “Twinkies more than apples.”

The government subsidizes certain crops, often increasing their prevalence in our diets. Corn is a popular example of the power of subsidies. In Michael Pollan’s The Omnivore’s Dilemma, one researcher likens Americans to corn chips with legs.

Bans: New York City made history when it took measures to strike trans-fats from restaurant menus.  After the rule survived backlash, other states and cities followed suit. In the next few years, the FDA will undertake a national trans-fat phase out.

Zoning and Land Planning: In some areas, large supermarkets and farmers markets are zoned out, making healthy food hard to come by. Developing parks and sidewalks is a proven way to get people moving without the conscious choice to exercise more.

Not all approaches that aim to reduce obesity target diet and exercise. Some of them appear unrelated to obesity at first glance. For example, a breastfeeding facility law requires employers to provide proper accommodations to encourage breastfeeding. While the law helps new mothers in many ways, it’s also a CDC priority strategy to prevent obesity as breastfeeding has been tied to reduced early childhood obesity.

Numerous policies and campaigns aspire to shrink obesity rates. They focus on a broad range of factors from diet specifically to overall health and wellness. CDC’s Division of Nutrition, Physical Activity, and Obesity database lists state-by-state activities if you want to get an idea of what’s in place.

What are lawmakers suggesting?

What does the future hold for the fight against obesity? Check out these examples of what policymakers have been cooking up:

Healthy Lifestyles and Prevention America (HELP) Act: Proposes a multi-pronged intervention strategy to enhance overall wellness of the American people. Children would enjoy enhanced nutrition and physical activity programs in schools and in childcare settings. Adults would benefit from workplace wellness programs. Everyone would benefit from proposed attacks on both salt and tobacco.

FIT Kids Act: Would fund grants for physical education programs that are based on scientific research. States would be required to analyze and identify specific student needs and develop their programs accordingly. The act would also require states to develop indicators of progress.

Reduce Obesity Act of 2013:  Suggests an amendment to title XVIII of the Social Security Act that would require the Medicare and You handbook to include information on behavioral therapy for obesity. It would allow physicians and other experts on Diabetes prevention to provide behavioral therapy outside of the primary care setting.

Stop Childhood Obesity Act of 2014: Seeks to deny financial benefits for companies to advertise and market certain food products to children. Tax deductions granted under the Internal Revenue Code would be barred for advertising to children that promotes consuming foods of poor nutritional quality. The Secretary of the Treasury and the Institute of Medicine would determine what constitutes foods of poor nutritional quality.

Beyond regulations and policies…

Some suggest that legal approaches may fill in the gaps left after regulations. The paper Innovative Legal Approaches to Address Obesity presents techniques that leverage law to  tackle obesity:

Ingredient caps: The government can limit the alcohol content of beer. They might do something similar with sugar if it’s proven to be harmful and addictive.

Limits on food marketing: Advertising messages are protected under First Amendment rights. As early as 1978, the FTC attempted a rule to limit advertising of sugary products to children. The rule was struck down after massive industry opposition. Many hope to revisit similar rules as obesity-related health consequences surface.

Compelling industry speech: A near opposite to limiting advertising would be to compel industry speech and require companies to disclose information that might affect consumption. The United Kingdom’s traffic light system provides an extreme example.

Increasing government speech: Government speech could be leveraged to counteract the prevalence of advertising messages by encouraging the consumption of healthy foods. The “5 a Day” fruit and vegetable campaign in the United States is one such example.

Purchase limits: The Supreme Court has allowed individual purchase limits on items like prescription drugs. Perhaps a limit on the amount of sugary beverages a minor can purchase could also be enacted.

Penalties for causing addiction: The government has a right to restrict sales of certain products to minors that it finds harmful or addictive — like alcohol and cigarettes. Some studies have suggested certain food additives are addictive. Companies could be vulnerable to litigation if they have been knowingly manipulating ingredients to encourage overconsumption.

Where do we go from here?

Let’s be honest, the obesity issue has been confounding us for years. Explosions of diet fads that vilify certain ingredients don’t help matters. Fat? Sugar? Gluten? Carbs? Most people just don’t know what to eat even though they’re being showered with ample advice.

Obesity lacks a simple cause, making it a convoluted case to crack. An array of dimensions in behavior, lifestyle, and environment contribute to it. Policy makers have their work cut out for them in innovating a range of initiatives that might control it. Consumers have their work cut out for them in sorting through all of the advice thrust at them to make sound decisions. Neither can stand alone. Consumers need all the help they can get from carefully designed government regulations that don’t infringe on privacy.

Should the government do more to help the population control their weight? Should they do less? Comment to tell us what you think.

Millbank Quarterly: Public Health Law and the Prevention and Control of Obesity

Washington Post: U.S. Sugar Subsidies Need to be Rolled Back

SAGE: The Role of Self-Efficacy in Achieving Health Behavior Change

Ashley Bell
Ashley Bell communicates about health and wellness every day as a non-profit Program Manager. She has a Bachelor’s degree in Business and Economics from the College of William and Mary, and loves to investigate what changes in healthy policy and research might mean for the future. Contact Ashley at staff@LawStreetMedia.com.
Share:
Related ItemsBloombergExerciseFatGet FitHealthHealthcareMenusNew YorkNYCObesityRegulationRestaurantsSodaSoda TaxSugarTrans-fat