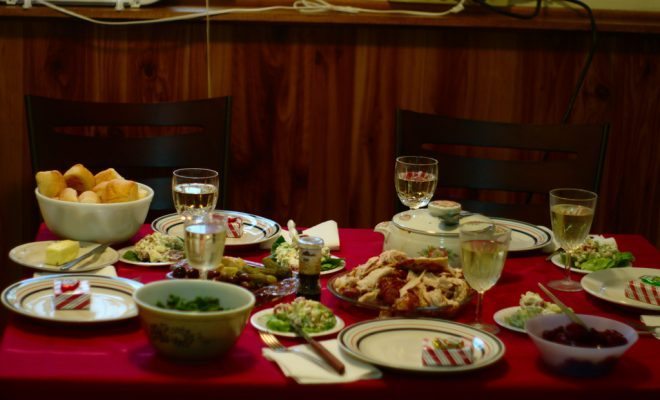 Holiday Hallucinations: Can You Really Have Visions of Sugar Plums?

We’re all familiar with “A Christmas Carol” and the old miser named Ebenezer Scrooge who achieves enlightenment after a night of ghostly visits. But it turns out that Scrooge’s haunts might have been helped along by something he ate or drank.

Eating and drinking (especially the extreme forms practiced throughout the holiday season) can impact your body enough to cause memorable dreams, nightmares, and sometimes hallucinations.

Below, I’ll explore the mental effects of holiday food through the lens of Scrooge’s misadventures. What actions might explain Scrooge’s nocturnal visits from a troupe of formidable ghosts? What does it mean for you? Let’s find out…

He Could Have Eaten a Hallucinogenic Food

I’m not saying that old Ebenezer was purposefully tripping on magic mushrooms. Quite a few foods might have contributed to his visions, or even cause you to see some weird things after Christmas dinner.

Specifically, Moldy rye bread. Ergot or (Claviceps Purpurea) is a fungus common on grasses, cereal crops, and ryes. It’s also the source of lysergic acid diethylamide (LSD). Scrooge’s cold, wet, pantry would have favored the growth of this fungus, which causes hallucinations when ingested.

Nutmeg becomes psychoactive when taken in large quantities. How much? More than the amount that usually dusts a mug of eggnog. It would take more than two tablespoons (two whole seeds) to produce any hallucinogenic effects. Nutmeg has mind altering properties because it contains myristicin, a chemical similar to amphetamine and mescaline.

Would Scrooge consume enough nutmeg to trip? In his day, men were sometimes known to carry around their own nutmeg graters in case an appropriate beverage presented itself. Nutmeg was used for headaches, and turkeys were even stuffed with it. While it’s unlikely that he was judiciously grinding copious amounts of nutmeg into his eggnog, it’s almost certainly something he could access. You shouldn’t worry though, unless you’re really planning on overindulging in nutmeg this holiday season.

Hallucinatory fish poisoning, or ichthyoallyeinotoxism, is a rare type of food poisoning that causes central nervous system disturbances, especially hallucinations and nightmares. Ciguatera poisoning is the most well-known type of hallucinatory fish poisoning. Fish become contaminated with ciguatoxins when they eat the toxin-producing seaplant, dinoflagellates. They can also become contaminated by eating another fish with ciguatoxins in its system.

Eating exotic fish usually causes hallucinatory fish poisoning, so it’s unlikely that London-dwelling Scrooge would have this to blame for his visit by ghosts.

What this means for your holiday: If you’re hoping to avoid holiday hallucinations, steer clear of strange new fish, don’t overdose on the nutmeg, and check your bread twice for suspicious mold spores.

He Could Have Been Over-Caffeinated

If Scrooge was in fact such a “tight-fisted hand at the grindstone”, maybe he owed his disciplined work ethic to profuse amounts of caffeine. And too much caffeine could lead to hallucinations, says this Durham University Study.

The researchers found that heavy caffeine users–those who drink the amount in seven cups of coffee or more a day–were more likely to have hallucinations or hear voices than low caffeine users.

Why does this happen? It might be stress, which caffeine tends to heighten, even physiologically. A stressed body releases the hormone cortisol, and a stressed and caffeinated body releases even more. The researchers believe the extra release of cortisol might be where the hallucinations come in, but they need to do more research to tell for certain.

What it means for your holiday: If you’re sleep deprived over the holidays, go ahead and have more caffeine, but draw the line at seven cups.

He Could Have Eaten Some Cheese

Could cheese cause vivid dreams? A study by the British Cheese Board suggests there might be some truth to this–if Scrooge had nodded off and dreamt of Marley, that is. The study found that consuming different types of cheese could encourage different types of dreams. Listen to this NPR spot to find out more.

Other scientific studies investigating a cheese-dream connection are limited. But preliminary results of a study on vitamin B-6, of which cheese is an excellent source, produced some compelling information. The results showed that people taking higher doses of vitamin B-6 reported higher dream salience; their dreams were more vivid, emotional, colorful, or just plain bizarre.

What it means for your holiday: If you want to have vivid dreams, taking a tour through the old holiday cheese plate might not be a bad idea.

He Might Have Just Eaten Too Much and Nodded Off

Scrooge lived alone. He also was trying to save money by keeping his house sparsely lit. Darkness + quiet = a perfect recipe for nodding off in the easy chair. Scrooge could have drifted off to sleep as soon as the stimulation provided by his sparse dinner had ended. Eating just before bed might be the perfect recipe for weird dreams, including those featuring the return of a deceased former boss.

Food has been shown to affect the levels of neurotransmitters in the brain that control time spent in rapid eye movement, or REM, sleep. You are most likely to dream in REM sleep.

For example, the chemical tyramine-a (found in dairy, meat, poultry and fish) increases brain levels of noradrenaline, also called norepinephrine. Noradrenaline produces the body’s response to fear and is sometimes even referred to as the “fight or flight” chemical. If your noradrenaline levels peak and you have a nightmare, your heart rate increases and your muscles tense up in response. Your heightened response to the visions in your nightmares would make them more memorable upon waking. Noradrenaline also makes blood pressure rise which could make dreams more nightmarish.

Other experts suggest a less complex explanation for vivid dreams following a late night binge. With an uncomfortably full stomach, you tend to toss and turn more, waking yourself up and interrupting your dreams. Dream interruptions often lead to heightened memories of the dream and the general sense that you’ve had more dreams than usual.

What it means for your holiday: If you tend to have nightmares, you might want to steer clear of the fridge on your way to bed. Those holiday leftovers could wreak havoc on your dreams.

It was hardly uncommon for gentlemen in those days to have a “nightcap” (stiff drink) before bed. They thought it might keep them warm throughout their nights like the actual nightcaps they wore on their heads. Scrooge wanted to save money on coal for heating, so he might have indulged in this nightly ritual. Little did he know that drinking so close to bedtime can lead to disturbed sleep and nightmares.

What it means for your holiday: Craving a holiday night cap? Just drink it at least three hours before bedtime or prepare for some nightmares.

Without any concerned family or friends to stage an intervention, Scrooge could have been a closet alcoholic. In rare cases, chronic alcohol abuse could lead to psychosis, the state of losing contact with reality.

Alcohol is a neurotoxin that can have many damaging effects on the brain. It can even induce alcohol related psychosis. Psychosis has been observed:

Long time alcoholics might be thiamine (B1) deficient which could lead to Korsakoff syndrome, a brain disorder associated with hallucinations, loss of memory, and confabulation.

What it means for your holiday: Even if you’ve had one too many eggnogs, you probably won’t start having visions. Alcohol induced psychosis is a concern for chronic alcohol abusers.

He Could Have One of These Conditions

Aside from one-off actions that might lead strange visions, some seemingly commonplace medical conditions cause hallucinations. Many of them could result from dietary choices like, gastroenteritis, gastritis, peptic ulcers, vitamin B12 deficiency, and low blood sugar. Scrooge could have suffered from any of these, and been none the wiser.

What it means for your holiday: Having a blood sugar crash after a unwise cookie binge? It might be the reason you’re hearing friendly voices telling you to eat even more…

Don’t get too scared. Food-induced hallucinations like these occur rarely. But experiencing a hallucination doesn’t automatically diagnose you with mental illness.

This video explains how anyone can hallucinate:

So there could be an easy explanation for what happened to Ebenezer Scrooge. The ghosts he saw might have been encouraged by beef, gravy, or an underdone potato. Now that you know what you know about the possible effects of holiday eating, you can prepare accordingly.

The hallucinations are pretty rare so you probably don’t need to worry about that. The worst your holiday eating and drinking will probably do is cause nightmares and disturbed sleep. Luckily, it’s not totally out of your control. This blogger has some advice to ensure your dreams are full of sugar plums and not sinister spirits:

NIH: Effects of Pyridoxine on Dreaming: a Preliminary Study

New Scientist: The Nightmare Before Christmas

Live Strong: Do B Vitamins Give People Vivid Dreams?

Ashley Bell
Ashley Bell communicates about health and wellness every day as a non-profit Program Manager. She has a Bachelor’s degree in Business and Economics from the College of William and Mary, and loves to investigate what changes in healthy policy and research might mean for the future. Contact Ashley at staff@LawStreetMedia.com.
Share:
Related ItemsAlcoholCaffeineCheeseChristmas EatingDreamsFishHallucinationsHoliday FoodScroogeSugar