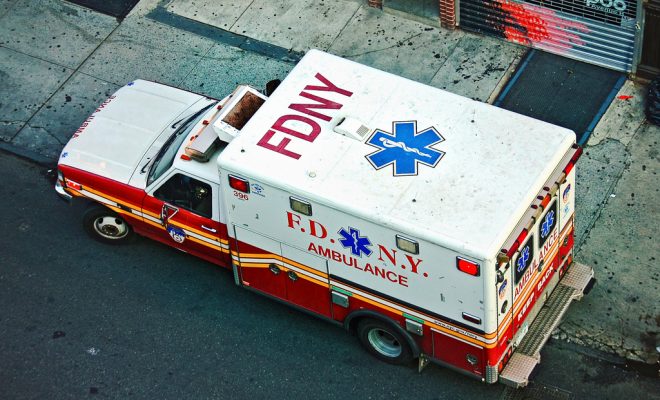 A man who was being taken to the hospital in an ambulance last year, but somehow managed to jump out of it, is now suing New York City, the Fire Department, and the four medical workers in the vehicle. He claims it’s their fault that he injured himself in the fall, as they failed to stop him from jumping out of the ambulance.

This seems like a lawsuit that the plaintiff–Yaugeni Kralkin from Staten Island–could not possibly win. But the snag is that he was very drunk–by the time a second ambulance picked up the then-unconscious man and took him to the hospital, his blood-alcohol level was .34. So it was likely higher when he was in the first ambulance.

For the record, you are not allowed to drive in New York when your blood alcohol concentration is .08 or above. A level of .16 can cause severe impairment to speech, judgment, and memory and cause unconsciousness. A blood alcohol level between .31 and .45 is life threatening.

So considering the amount of alcohol Kralkin, who is 56, had in his blood, it is safe to believe he didn’t make very thought-out decisions that night. Kralkin said he had just returned from a long-haul drive to California–he drives a truck–and was looking forward to seeing his wife and son. But he got into a fight with the son, and hit the bottle.

“Your honor, had the city not supplied the ambulance, I could not have jumped out of it.” https://t.co/9N3JdZoKsQ

He said he bought a bottle of cognac and ended up outside a house in the neighborhood, but he doesn’t remember what happened after the ambulance showed up. He did however suffer bruises and cuts after tumbling out of the ambulance. His lawyer Borislav Chernyy said:

He certainly did get himself out of the ambulance, but our position is that he was so grossly unsober, he had so much alcohol in his system, that the condition he was in rendered him the equivalent of helpless, absolutely helpless to make informed decisions about his own safety.

The lawsuit states that the four medical workers “permitted” Kralkin to jump out of the moving emergency vehicle, and that after he jumped, they “failed to properly diagnose, treat, care and transport Plaintiff.” It allegedly took another 12 minutes before he was transported to the hospital, this time without exiting his vehicle, as he lost consciousness in the fall.

Kralkin’s lawyer argues that the medical workers were at fault for not stopping Kralkin. He is seeking damages as well as compensation for his medical bills. But the spokesperson for the medical worker’s union, the Uniformed EMTs, Paramedics and Fire Inspectors F.D.N.Y. Local 2507, says there is no way they could be held accountable.

“What is this E.M.T. supposed to do to stop somebody who loses control of themselves and does something crazy like that?” Robert Ungar, the union spokesman, said. He added that EMT workers don’t have the legal authority to hold someone against their will, and they are not armed. A stretcher in an ambulance is not that hard to break out of, and if someone tries to do something out of the ordinary, the EMTs are under no obligation to get into an altercation. We’ll have to see if Kralkin’s lawsuit ends up being successful.

Emma Von Zeipel
Emma Von Zeipel is a staff writer at Law Street Media. She is originally from one of the islands of Stockholm, Sweden. After working for Democratic Voice of Burma in Thailand, she ended up in New York City. She has a BA in journalism from Stockholm University and is passionate about human rights, good books, horses, and European chocolate. Contact Emma at EVonZeipel@LawStreetMedia.com.
Share:
Related ItemsAlcoholAmbulanceLawsuitNew York CityNew York City Fire DepartmentStaten IslandTorts NewsWeird Lawsuits