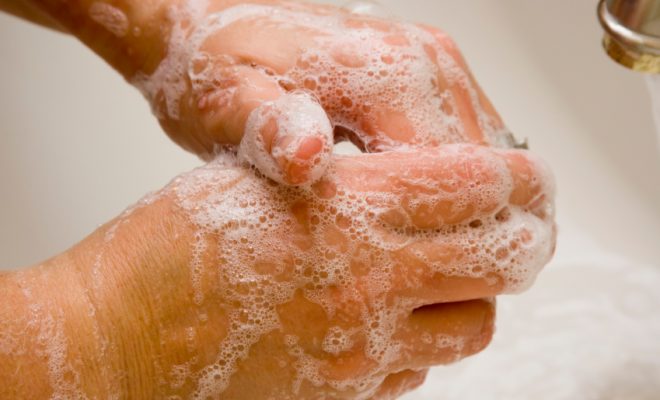 Every day, millions of Americans use antibacterial hand soaps and body washes. Fears of disease and infection have caused the ubiquitous use of these products in the home, at work, and at school. In 2009, the H1N1 virus caused Americans to buy antibacterial soaps in record numbers; it’s now difficult to even find a single soap on the market not dubbed as “antibacterial.” On September 2, 2016, the Federal Food and Drug Administration (FDA) rattled common conceptions about these antibacterial products in a final order issued by the administration.

According to the FDA, over-the-counter (OTC) antiseptic wash products with one or more of a specific list of 19 active ingredients can no longer be marketed to consumers. With the rising threat of antibiotic resistance, noted by the Center for Disease Control (CDC) in a report issued in 2013, this shows a dramatic shift toward limiting the daily use of antibacterial products by consumers. According to the CDC, washing with plain soap and water continues to be the most effective method for avoidance of illnesses and preventing the spread of germs. Dr. Janet Woodcock, director of the FDA’s Center for Drug Evaluation and Research, stated that data now suggests long-term use of antibacterial ingredients may be doing more harm than good.  Keep reading to learn more about the history of antibacterial soaps and the potential hazards they possess.

HISTORY AND EVOLUTION OF ANTIBACTERIAL SOAPS AND WASHES

Chemically, soap is a salt of a fatty acid that transforms insoluble particles to soluble ones in water, allowing them to be rinsed off. Oil particles, for example, become soluble in water with the addition of a few soap drops. Soap has been around for centuries, with the earliest record of its use found around 2800 B.C. in ancient Babylon. A formula for soap consisting of water, alkali, and cassia oil was even found on a Babylonian clay tablet dating back to that time period. The Latin word for soap, sapo, first appears in Pliny the Elder’s encyclopedia “Historia Naturalis,” which discusses the manufacture of it from tallow and ashes.

In the past, bathing with soap was for social or ritualistic reasons rather than for cleanliness. Industrialized nations began using soaps more commonly due to an increased understanding of the role hygiene plays in reducing the size of microorganisms. Amidst the 16th century, more luxurious soaps started being produced in Europe using vegetable oils. The late 18th century gave rise to the first industrially manufactured bar soaps. Liquid soap was not invented until the 1800’s, and in 1865, William Sheppard patented a liquid version of soap.

According to official records, antibacterial soap was invented in 1984 by David Poshi and Peter Divone, who filed for a patent in December of that same year. Poshi and Divone added triclosan to the formulation, an antibacterial and antifungal agent that breaks down bacterial cell walls to kill them. Triclosan had previously only been used in the 1970’s as a hospital scrub. Now, it can be found not just in soap, but shampoos, deodorants, mouthwashes, and toothpastes.

Dial soap, however, was technically the world’s first antibacterial soap on the market. In 1948, chemists from Armour and Company, a meat-packing company, developed the soap and introduced it to the Chicago market. The antibacterial properties were from the chemical hexachlorophene, referred to as AT-7, and it promised “round-the-clock” protection. The company first advertised the product on the pages of the Chicago Tribune with scented ink, and it became the leading deodorant soap manufacturer in the U.S. By the 1970’s, however, hexachlorophene was removed from the market and restricted only to the hospital setting due to reports of the chemical causing infant neurological damage. Armour then replaced the ingredient with triclocarban. Currently, the United States spends about 1 billion dollars annually on products containing triclosan and triclocarban, and about 80 percent of all antimicrobial bar soap contains triclocarban.

GENERALLY RECOGNIZED AS SAFE AND EFFECTIVE

In 1938, Congress passed a set of laws known as the Federal Food, Drug, and Cosmetic Act to oversee and ensure the safety of food, drug, and cosmetic products in the United States. The Act defines “new drugs” as ones that have a “composition which has not been generally regarded as safe and effective by qualified experts.” The designation of generally recognized as safe and effective (GRASE) applies to particular old drugs that do not require prior approval of the FDA in order to stay or enter the marketplace because they have been recognized as generally safe and effective by medical professionals.

Essentially, a drug is not considered a new drug when it fits under the designation of GRASE. The FDA has three criteria for establishing a drug as GRASE:

After reviewing available literature and research, along with hosting public meetings, the FDA has now determined that 19 chemicals used in antibacterial soaps and washes are no longer generally recognized as safe and effective.

POTENTIAL HAZARDS FROM DAILY USE

In 2013, the FDA proposed a rule after data suggested that long-term exposure to certain active ingredients in hand and body washes could pose serious health risks, such as bacterial resistance or hormonal effects. Manufacturers were then required to provide additional data to the agency regarding the general safety and effectiveness of particular ingredients in order to continue marketing these products.  This included a demonstration that the products were superior to non-antibacterial ones. Since then, manufacturers of antibacterial hand soaps and body washes containing these ingredients have not provided the necessary data to satisfy a designation of “safe and effective.”

Two of the most commonly used ingredients, triclosan and triclocarban, are two of the 19 chemicals included in the list. As indicated by the FDA, almost all soaps labeled as “antibacterial” or “antimicrobial” contain at least one of the 19 ingredients. Triclocarban has a hazard quotient of greater than one, which indicates adverse effects on organisms due to toxicity. It is found in extremely high concentrations in aquatic environments and may be disruptive to hormones critical for developmental and endocrine processes in wildlife. In tests conducted all over the globe, including the United States, scientists have detected triclosan in water supplies. Both triclosan and triclocarban have also been shown to be 100-1,000 times more effective in inhibiting and killing algae, crustaceans, and fish than they are at killing microbes. The Environmental Protection Agency currently regulates the use of triclosan as a pesticide.

The high potential for triclosan-caused endocrine disruption in humans is also a significant hazard. While the rate of absorption in the skin is low and minimal interaction with the chemical may not have adverse effects, repeated low-dose exposure to triclosan could cause endocrine disruptions over time. Although there is not yet definitive proof that demonstrates triclosan is dangerous to humans, the information uncovered through years of animal studies suggests otherwise.

Moreover, research now demonstrates that it is critical to maintain exposure to bacteria to maintain a healthy human microbiology. A study published this month in Environmental Science and Technology noted a positive association between the concentration of antimicrobials and the abundance of antibiotic resistant genes. The team of scientists from the University of Oregon, Harvard School of Public Health, and Arizona State University found that particular dust samples collected with high levels of triclosan had higher levels of genes linked to antibiotic resistance. Even back in 2001, a team of scientists found that 76 percent of liquid soaps on that market contained antibacterial agents. They also found that no scientific evidence had ever been published to note that the use of such chemicals did anything to prevent infection.

Public health concerns over antibiotic resistance and deadly outbreaks from superbugs prompted this deeper inspection into antibacterial products and their efficacy. This final rule by the FDA impacts the soap industry on a massive scale, and some advocates are pushing back. A spokesperson for the American Cleaning Institute stated that “washing the hands with an antiseptic soap can help reduce the risk of infection beyond that provided by washing with non-antibacterial soap and water.”

Manufacturers have only one year to comply with the final ruling by either reformulating the ingredients in their products or removing them from the marketplace altogether. Many companies have already started to phase these 19 chemicals out of their products after the 2013 FDA proposed rule, in an effort to stay ahead of the curve. Triclosan has now been replaced in products with one of three other chemicals: benzalkonium chloride, benzethonium chloride, or chloroxylenol. Companies have another year to provide data demonstrating their safety and effectiveness.

An important point to note is that this final rule does not apply to consumer hand sanitizers and wipes, or antibacterial products used in healthcare settings. For sanitizers, the FDA has requested additional information to support the safety and efficacy of those ingredients used in OTC topical consumers antiseptic products. Additionally, products such as toothpaste are not affected by this change, including all of the clothing, kitchenware, furniture, and toys that are formulated with triclosan to prevent bacterial contamination. Even with drastic industry changes ahead, it seems much research is still needed regarding antibacterial product use.

U.S Food & Drug Administration: Antibacterial Soap? You Can Skip It — Use Plain Soap and Water

Forbes: FDA Saves Us From Ourselves, Halts Overexcessive Use of Antibacterial Soaps

Nicole Zub
Nicole is a third-year law student at the University of Kentucky College of Law. She graduated in 2011 from Northeastern University with Bachelor’s in Environmental Science. When she isn’t imbibing copious amounts of caffeine, you can find her with her nose in a book or experimenting in the kitchen. Contact Nicole at Staff@LawStreetMedia.com.
Share:
Related ItemsantibacterialantimicrobialBanned ChemicalsFDAsoaptriclocarbantriclosan