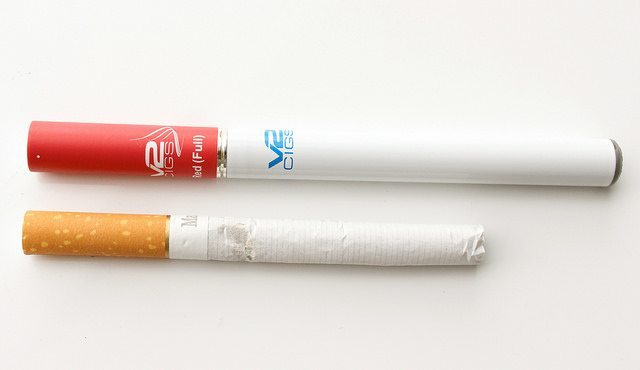 E-cigarettes are one of America’s latest trends. Since entering the United States over the last ten years, they have taken the smoking community by storm. To many of us however, they are still somewhat of a mystery. Generally, we have a sense that they are less harmful than cigarettes, but how much less harmful exactly? With any new product, it is hard to foresee long-term health effects. But what do we know so far? Should e-cigarettes and their advertisements be regulated similarly to conventional cigarettes? Read on for a breakdown on what e-cigarettes are, the debates over them, and what regulation is being discussed.

What are electronic cigarettes?

E-cigarettes, also known as e-cigs and vaporizer cigarettes, are used as an alternate method to smoking tobacco via cigarettes, pipes, or cigars. They are battery operated and don’t involve smoke inhalation. The idea is that they bypass tobacco smoke, which can include more than 7,000 different harmful chemicals, many of which are known to cause cancer, heart disease, and lung disease. Some of the more well-known poisonous chemicals are cyanide, methanol, and ammonia. In addition, tobacco smoke includes tar, carbon monoxide, and nitrogen oxide.

Many e-cigs are designed to look like cigarettes and create a similar experience for those who are smoking them. A Chinese pharmacist perfected them in 2003-2004 and they were quickly brought to the international market in 2005-2006. In the current, automatic versions, a user sucks on an end piece to activate a sensor that allows a heating element to vaporize a liquid solution held in the mouthpiece.

E-cigarettes are generally reusable and come in three parts: the Mouthpiece, the Atomizer, and the Battery.

This product eliminates the inhalation of tobacco smoke, however it is important to note that nicotine itself isn’t very healthy. Although it is not the element of cigarettes that causes cancer, the U.S. Surgeon General has linked nicotine to negative impacts on fetal and adolescent brain development, premature birth, and low birth weight. In rare cases, nicotine can even cause abnormal heart rhythm and atrial fibrillation. It is also known to cause mouth irritation, mouth and throat pain, high blood pressure, and canker sores.

In 2014, a study found that “e-cigarettes with a higher voltage level have higher amounts of formaldehyde, a carcinogen.” This is under debate however due to the methods and nature of the study.

How are conventional cigarettes regulated?

We already know that smoking tobacco is awful for your health. It is to blame for 30 percent of all cancer deaths in the U.S., and accounts for 87 percent of lung cancer deaths in men and 70 percent in women. As a result of these health concerns, cigarettes and their advertisements are heavily controlled. To ascertain whether e-cigarettes should be similarly regulated, we need to understand established cigarette regulations. Here are some recent highlights.

Currently, there aren’t any regulations concerning the manufacture, distribution, and marketing of e-cigarettes. The only type of e-cigarettes subject to regulation are those designed for therapeutic purposes, as the FDA has authority to oversee those.

Only three states in the U.S. ban e-cigarettes in designated 100 percent smoke-free venues: Utah, New Jersey, and North Dakota. Only 15 states restrict the use of e-cigarettes in other venues. There are 162 local laws that restrict e-cigarettes in various venues, but those appear to be few and far between.

The question remains: should we be worried about e-cigarettes? That’s a debate that’s happening across the country. They do eliminate deadly smoke inhalation, the most detrimental part of smoking cigarettes. However, there are still concerning aspects of e-cigarettes that need to be taken into account.

E-Cigs as a Gateway to Smoking for Young Adults

The Journal of the American Medical Association (JAMA) published a 2014 study entitled, “Electronic Cigarettes and Conventional Cigarette Use Among US Adolescents.” The study was conducted out of a concern over the increasing use of unregulated e-cigarettes by today’s youth. The results came from a sample of U.S. middle and high school students who participated in the 2011 and 212 National Youth Tobacco Survey. It found:

In accordance, a 2013 study published by the Centers for Disease Control and Prevention (CDC) concluded that:

Additionally, the CDC found that more than 250,000 young adults who have never smoked a cigarette have tried an e-cigarette. That is a triple increase from 2011.

If these studies are indicative of reality, then it’s scary to think of how e-cigarette companies are targeting the youth demographic. According to a study published in Pediatrics, “electronic cigarette advertisements increased by 256 percent from 2011 to 2013 and young adult exposure to e-cigarette ads jumped 321 percent in the same time period.“ It found that 75 percent of youth exposure to e-cigarette ads happened through the medium of cable networks like AMC, Comedy Central, and VH1. E-cigarette ads appear on programs like “The Bachelor,” “Big Brother,” and “Survivor,” which were rated amid the 100 highest-rated youth programs in 2012-13.

Other tactics accused of being aimed at young adults include free giveaway samples at music and sporting events, candy flavors, and the glamorization of packaging. All of these actions have been banned for traditional cigarettes companies because of their appeal to the youth.

There are also testimonials, easily found online, that share success stories of smokers that quit with the help of e-cigarettes. These findings and interviews are not to say that it never happens, but it does not seem to be the norm.

The FDA has the authority to regulate cigarettes, cigarette tobacco, roll-your-own tobacco, and smokeless tobacco. The FDA proposed the “deeming rule” on April 24, 2014 to extend tobacco products to include e-cigarettes. If approved, e-cigarettes would be regulated in the same manner as traditional cigarettes. This includes federal prohibition on free sampling, federal warning label requirements, and age verification requirements for retailers. It is still uncertain when and to what extent the FDA will be empowered to regulate e-cigarettes.

Studies looking into e-cigarette health concerns and their position as a gateway product for America’s youth are still new. The product only reached the U.S. in the last ten years and nothing is 100 percent conclusive. On one hand, smoking an e-cigarette is less harmful to your health than smoking a traditional cigarette. If a traditional smoker quits cigarettes and manages to only smoke e-cigarettes for the rest of his or her lifetime, that is a good thing. In the same respect, if a young adult who would have developed a smoking habit only ever uses e-cigarettes because of their availability, that is also a good thing. On the other hand, e-cigarettes aren’t necessarily safe for your health just because they are safer than cigarettes. And we could eventually find that they definitively promote cigarette smoking. The government and FDA can revisit the subject when there is more conclusive information available.

FDA: Deeming Tobacco Products to Be Subject to the Food, Drug, and Cosmetic Act

E-Cigarette Research: The Deception of Measuring Formaldehyde in E-Cigarette Aerosol

Medical News Today: What Are E-cigarettes?

Jessica McLaughlin
Jessica McLaughlin is a graduate of the University of Maryland with a degree in English Literature and Spanish. She works in the publishing industry and recently moved back to the DC area after living in NYC. Contact Jessica at staff@LawStreetMedia.com.
Share:
Related ItemsAmerican Cancer SocietyCancerCigarettesE-cigarettesElectronic CigarettesFDAHealthLung CancerNicoteneRegulationSmokeSmokingTobacooVapingYouth