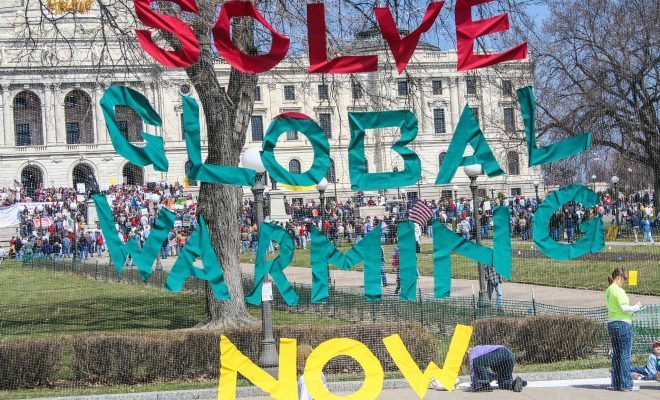 Climate Change: How Will it Impact Our Health?

Out of context, the words “climate change” don’t sound very scary at all. Here’s the context that makes it scary.

The earth’s climate has been in flux since it burst into existence some 4.5 billion years ago. It’s been hot and cold and everywhere in between. Carbon dioxide in the atmosphere danced between 200-300 parts per million (ppm) during the earth’s long lifespan. But starting in the 1900s, carbon dioxide  pushed past the 300 ppm marker and kept climbing. Today, carbon dioxide levels “weigh in” at about 400 ppm. So what? Well, carbon dioxide and other greenhouse gases trap heat and send average temperatures climbing. Even worse, experts believe human activities like burning fossil fuels and deforestation increased carbon dioxide and caused climate change.

We’ve only been on the earth for a fraction of its lifetime. We’ve evolved based on certain conditions, and now those conditions are changing. In other words, we’re not well adapted for the world we’re creating. The changing climate is a crucible of possible human health complications.

Here’s what the future of health looks like if we don’t combat and adapt to climate change.

Before I run away with how climate change will kill us all (just kidding!), let’s do a quick overview.

Greenhouse gases like carbon dioxide hang out in our atmosphere and absorb heat from the sun. Since these gases don’t occur naturally, the extra heat they absorb causes temperatures to increase above normal levels. As of 1900, carbon dioxide emissions from human activities have billowed up by 40 percent and global temperatures keep creeping upward too.

In our interconnected world, increased temperatures have implications beyond needing more A/C. Increased heat warms our oceans, melts polar and alpine ice, and drives up the sea level, which in turn facilitates stronger and more devastating storms.

Why is climate change bad for our health?

Ripples from climate change impact things directly related to your health, like the water and food supply. The World Health Organization predicts that climate change will cause 250,000 additional deaths a year between 2030 and 2050 because of heat stress, malnutrition, malaria, and diarrhoeal disease. Areas with fewer resources to adapt will suffer the most.

Here are some startling health scenarios of the future, and how climate change might cause them.

Climate change will make it easier for existing diseases to infect more people by altering their geographic range and lengthening the infection season. For example, ticks carrying Lyme Disease will cover more ground as more regions warm to temperatures where they can survive. Mosquitoes, which carry many diseases like Malaria and Dengue, will also flourish in warmer temperatures. High temperatures increase their reproduction rate, grow their breeding season, and enable them to bite more people. In general, all bacteria multiply faster in warmer temperatures, so many pathogens will find our warming climate suitable for proliferation.

Climate change might also encourage emerging and shifting diseases. Experts at the University of Nebraska-Lincoln say climate change makes it easier for diseases to switch to new hosts. Many assume that the co-evolution of pathogens and specific hosts will make it harder for pathogens to shift and infect a new host with different biological makeup. Alarming evidence has shown that pathogens can shift to new hosts rather quickly when necessary. The researchers offer Costa Rica as an example, where humans decimated the population of capuchin and spider monkeys. A parasite once exclusive to these monkeys was unphased and latched on to howler monkeys, a different genus of monkey. If pathogens need to make rapid shifts, humans might find themselves facing several for which they have no immunity. Climate change threatens to uproot habitats and living patterns, bringing humans, animals, and insects into closer contact with each other–and their unfamiliar pathogens.

More Will Die From Extreme Heat

Heat stroke and heat-associated dehydration are the most common causes of weather-related deaths. People with existing cardiovascular issues are especially vulnerable to extreme heat. Furthermore, heat complications have a cumulative effect; your vulnerability to heat stroke increases after one episode. Cities have been heating up at a higher rate than rural areas in recent years. This leaves some of the world’s most populated areas in danger.

As rainfall becomes less predictable, it will compromise our safe water supply. With less safe water, it won’t be nearly as easy to do simple things that prevent disease, like washing hands. People take hand-washing for granted, but it reduces risk of diarrhoeal disease by 20 percent, which actually kills 760,000 children five and under annually.

Too much water, brought from the climate change risks of severe flooding, also wreaks havoc on sanitation. Floods contaminate freshwater, spread waterborne disease, and create ideal living conditions for mosquitoes–one of the most prolific disease carriers.

Breathing Won’t Be as Easy

Warmer temperatures bring more ground-level ozone, a miasma of pollutants like carbon dioxide and nitrous oxide. Ground-level ozone is also called smog, a term you’re probably more familiar with. It’s been known to damage lung tissue and aggravate respiratory systems. Increased smog will make breathing an excruciating task for people with existing lung diseases and Asthma. It might even encourage the development of Asthma in otherwise healthy people.

People with allergies should also be very afraid of climate change. The spring allergy season has already grown in the United States and it threatens to continue expansion. Ragweed allergies? Tests show that more carbon dioxide and higher temperatures increases the yield of ragweed pollen.

Climbing temperatures, patchy rainfall, droughts, and floods will devastate staple crop yields in the world’s poorest regions. Malnutrition and undernutrition will burgeon as a result. By as early as 2020, crop yields in some African countries could be halved.

Increasingly severe weather already destroys crops. Pollinators disappear while pathogens and pests flourish to chomp through human crops. For example, soybean rust, a fungal infection caused by the pathogen P. pachyrhizi, spreads easily in warm, moist environments. Soybean rust has been a scourge in Asia and Africa for years and was introduced to the United States by a hurricane. Winds carry the spores for miles, leaving behind crop devastation. Similar diseases will most likely plague crops in new climates.

Scientists believe climate change will lead to much stronger storms. The World Health Organization says that natural disasters reported globally have tripled since 1960, resulting in over 60,000 deaths.

Strong storms and natural disasters destroy medical facilities, cut the electricity that powers medical equipment, interferes with emergency communications tools like 911, and hinders transportation. Many injuries will happen in times when disaster strikes, even though our responsive capabilities will be restricted.

We Gotta Do Something

It’s pretty clear that we have to do something before things get out of hand. Do something…but what?

While these two categories encompass different approaches, we need both to achieve the greatest effect. If you’re interested in reading about more climate change adaptation and mitigation initiatives, check out this fact sheet on President Obama’s Climate Change Action Plan. In terms of public health, however, we’ll stick to a few health-related initiatives, most of which fall under the adaptation category.

As the name suggests, this plan aims to prepare healthcare facilities for climate change and related complications. The Department of Health and Human Services released an intensive guide with a framework designed to help healthcare facilities revamp their infrastructure and technology. The initiative includes an online planning toolkit that serves as an interactive guide to walk professionals through these steps of resilience:

So far, healthcare industry leaders like Kaiser Permanente have committed to use the guides to help in their resilience planning.

The Centers for Disease Control and Prevention developed a framework of preparedness geared more toward public health professionals working locally. Their framework involves projecting the impacts of climate change and assessing effectiveness of interventions. The evidence of effectiveness will be especially useful for people planning future interventions. Click here to see a chart made by the CDC to explain the BRACE framework.

Many look at the Keystone XL pipeline decision to judge the climate change temperature in Congress. To the dismay of environmentalists, the Senate rejected two amendments related to the Keystone XL pipeline bill that admitted the human role in climate change and called for more government interventions. The President just vetoed the bill and many believe Congress will not override it.

Still, many climate change advocates are alarmed that the bill went as far it did, saying it would contribute to climate change because of the sheer amount of extra energy it would require and carbon pollution it would make. According to this NRDC Issue Brief, building the pipeline would create the same carbon dioxide emissions as Americans driving 60 billion more miles this year.

If you’re frustrated with the accuracy of forecasts now, be prepared. While climate change poses a new challenge without guiding evidence or precedent, the health complications from climate change have already begun. We see more cases of Lyme disease. Allergies grow in severity. We’re not sure what will work, we’re not sure what the future will bring, but we’re sure we need to brace ourselves for coming changes and meet current changes head on. We all need to work together to make sure that we stay healthy in coming years.

Ashley Bell
Ashley Bell communicates about health and wellness every day as a non-profit Program Manager. She has a Bachelor’s degree in Business and Economics from the College of William and Mary, and loves to investigate what changes in healthy policy and research might mean for the future. Contact Ashley at staff@LawStreetMedia.com.
Share:
Related ItemsBRACECDCClimate ChangeDiseaseGlobal WarmingHeatKeystone XLKeystone XL PipelineNYC Cool RootsPresident ObamaSanitationSenateWHOWord Health Organization