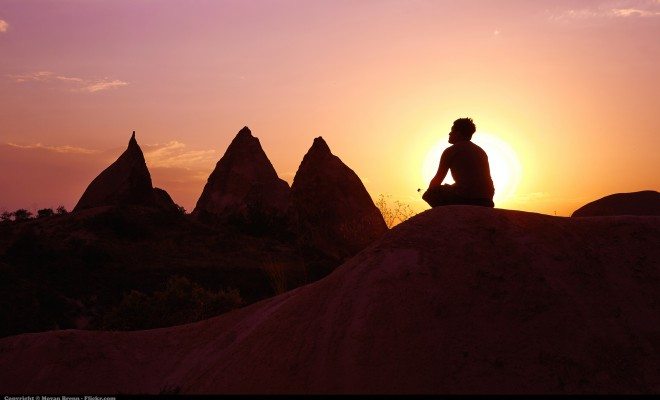 Can Meditation Change Your Brain?

If you had the chance to change your brain, would you? If you said yes, meditation might be the answer. Meditation involves sustained thinking aimed to relax or achieve religious or spiritual purposes. It’s a simple and ancient practice; paintings found in the Indus Valley from 5,000-3,500 BCE depict people reposing in meditative postures. Throughout its long history, meditation has been lauded for virtues like improved moods and decreased anxiety. But how does meditation produce these benefits aside from just making people more relaxed?

How can you change your brain?

It turns out that meditation actually changes your brain. This might sound a little strange at first, but many things you do can change your brain thanks to a concept called neuroplasticity. Neuroplasticity refers to the brain’s ability to change through experiences or repeated practice. When exposed to a stimuli, the brain can actually create new neurons and form new neural connections that change its structure. When you learn to play new instruments or memorize complicated dance moves, you’re restructuring your brain’s neural pathways.

Think of it this way: when you lift weights repeatedly, your muscles probably get bigger or more toned. They change. Meditation exercises the brain, and like lifting weights, it can produce desired changes.

Funding for research on alternative medicine and meditation surged in the past several years. With healthier budgets and burgeoning new technologies, researchers discovered new scientific connections between meditation and changes in the brain. Below are some summaries of their findings.

Massachusetts General Hospital documented that meditation causes changes in the brain’s gray matter. Researchers there measured differences in gray matter concentration in subjects’ brains before and after an eight-week Mindfulness-Based Stress Reduction (MBSR) Program using magnetic resonance (MR) images. After meditation, subjects displayed more concentration in the gray matter of different brain regions, including the left hippocampus. They also took before and after images of a control group that practiced no meditation and saw zero notable changes.

Time out. I have gray stuff in my brain?

Yup. Gray matter tissue surrounds the cerebrum. It’s also called the cerebral cortex, but was dubbed gray matter because of its dull tone. This is the part of your brain that wrinkles. The cerebral cortex is responsible for many functions including motor movements, sensory processing, language, and cognitive skills.

After meditation, gray matter in the subjects’ brains became more concentrated in these regions:

The Wake Forest Baptist Medical Center found that meditation reduces subjects’ anxiety ratings by as much as 39 percent. They studied 15 volunteers with normal stress levels, no diagnosed issues, and no meditation experience. The volunteers learned the proper way to practice mindful meditation and took just four 20-minute classes. Scientists noted changes in the brain areas associated with worrying and emotions during and after the meditation.

Scientists noticed increased activity in the areas noted below. While each perform many complex functions, their associations with emotions, guilt, and conflict control contributed to the subjects’ decreased anxiety ratings.

The study showed that you can change the structure of your brain, making certain areas thicker and stronger with constant practice. Why is that so special? Well, Albert Einstein might have owed some of his genius to thicker connective structures in his brain.

These regions indicated below were thicker in the meditators studied:

What else can meditation do?

Other studies have suggested fascinating effects of meditation without pinning down the actual brain structures responsible. According to these compelling findings, meditation might…

Our brains have limited capacity for processing synchronous stimuli. For example, when presented with two visual targets in close proximity, you can’t detect the second. This is called attentional blink. See for yourself:

But some studies suggest meditation reduces attentional blink. Attentional blink happens because the two targets compete for your limited brain resources. Meditators allocate their resources across the targets more effectively and therefore can detect both.

Make Us Masters of Pain

Mind over matter. Believe and achieve. Mantras like this stare us down from classroom posters and self help tomes. While the statements are inspiring, few people take them literally. But evidence that you can change your brain through meditation gives these words new life. From changing your gray matter concentration to thickening certain regions of your brain, the emerging studies on meditation are compelling–even for the most skeptical of potential practitioners.

You have the power to change your brain. How’s that for an empowering meditation mantra?

New Scientist: How Life Shapes the Brainscape: From Meditation to Diet, Life Experiences Profoundly Change the Structure and Connectivity of the Brain

Mind, Mood & Memory: Eight Ways to Improve Your Focus–and Your Memory; These Suggestions For Boosting Concentration Can Help You Strengthen Your Ability to Absorb Information

Journal of Neuroscience: The Role of the Ventromedial Prefrontal Cortex in Abstract State-Based Inference During Decision Making in Humans

Science Daily: How is Our Left Brain Different From Our Right?

Psychology Today: An Overview of Meditation: Its Origins and Traditions

Ashley Bell
Ashley Bell communicates about health and wellness every day as a non-profit Program Manager. She has a Bachelor’s degree in Business and Economics from the College of William and Mary, and loves to investigate what changes in healthy policy and research might mean for the future. Contact Ashley at staff@LawStreetMedia.com.
Share:
Related ItemsAlternative MedicineBrainChange Your BrainExerciseGray MatterMeditationMindfulnessNeuroplasticityPsychology